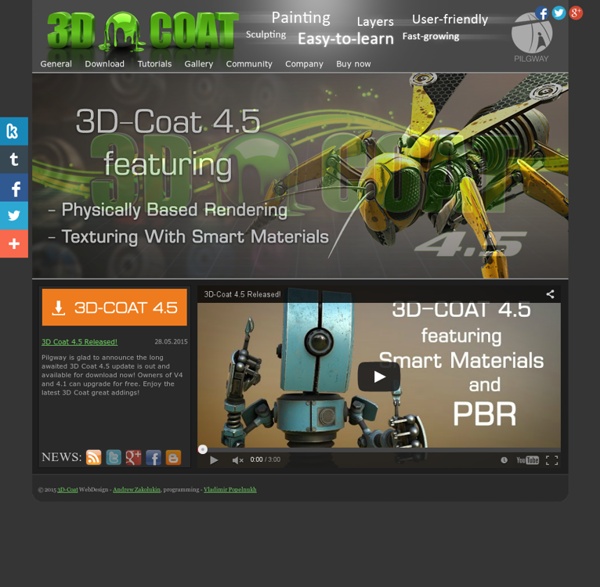 3ds Max - 3D Modeling Trial Product Privacy Notice This Trial Privacy Notice describes a data collection and use program. It applies in the US, Canada, UK, Ireland, and Australia. If you are from another country, you will still need to click to agree to the notice, but the program will not apply to you. Importing Elevation Data into Bryce 6.1 Importing USGS NED and SRTM Elevation Data into Bryce 6.1 This tutorial explains how to import US and world elevation data downloaded from the USGS National Map Seamless Server into Bryce 6.1. Adobe Photoshop serves as an intermediate application for importing the data into Bryce at full 16-bit resolution. The rather involved procedure has three parts:

» “Terrain Cone” Kirk Dunne . Blog g2h 3d dem displacement map This was a another departure, one that I like to take quite often and that is to go about creating something in a way that is not the norm. In this case, I did not model this abstract piece with polygons but rather it is a image turned into a 3D mesh. There are many names for this depending on what program you are using. Nowadays, most 3D programs would call this a Displacement map. LONG ago they were called G2H (grayscale to height) and if you are using a landscape generation program (Bryce, Terragen, Vue) you might import one called a DEM (Digital Elevation Map) and the resulting mesh in said programs would probably just be referred to as a “Terrain”. To be simple, a G2H/DEM Map is a grayscale (black and white) image.

Blender 3D: Noob to Pro/Making Landscapes with heightmaps - Wikibooks, open books for an open world This tutorial will show you how to make advanced terrain such as mountains using Blender and gimp or any other image editing software. Blender has the ability to use height maps to create meshes. Height maps are black and white images with white representing the highest point and black the lowest. Creating the heightmap image[edit] Note: This entire Tutorial presumes that you are already familiar with other Editing Software, such as GIMP... and already know how to create "textures" with that software.

K-3D - Wikipedia, the free encyclopedia K-3D is a free 3D modelling and animation software. Despite its name it is not a KDE application; it uses the GTK+ toolkit via gtkmm.[1] It features a plug-in-oriented procedural engine for all of its content. K-3D supports polygonal modelling, and it includes basic tools for NURBS, patches, curves and animation. Snapshot of the K-3D animation and image rendering computer program. Nicolai Klimaszewski Nicolai Klimaszewski 1. Hand-carving original art for the production of lithophanes: The best lithophanes produced in the nineteenth century were hand-carved, even those that have a photographic appearance to them. The shape of things to come: A consumer's guide to 3D printers CES 2013 proved to be something of a coming out party for consumer-facing 3D printers. Sure MakerBot earned a fair amount of attention at last year's show with the announcement of the Replicator, which snagged its share of awards from various press outlets. This year, however, saw a relative deluge in 3D-printing representation, with strong showings from 3D Systems, FormLabs, MakerBot and the cloud-based 3D printer, Sculpteo. Even with so many companies rising to prominence, the dream of truly mainstream 3D printing still feels a ways off -- if that is indeed where we're inevitably heading. These nascent days are an exciting time, with a diverse array of companies and organizations vying to be the first to bring the technology to our homes.

Slicer v4.3 20110619 Moved from the 'Roof' thread... matt77 wrote:Excellent Script. Many thanks -- works a treat for me!!! Okino's VRML, X3D and Inventor File Export Converter & Translator This export converter (an integral aspect of Okino's core NuGraf and PolyTrans software) outputs clean and detailed files to the X3D, Classic VRML, VRML 2.0, VRML 1.0 and a sub-set of the Open Inventor v2 file formats. VRML2, Classic VRML and X3D are probably three of the most common and standardized 3D file formats currently in existence. The Okino VRML/X3D import/export converters form the backbone of our software products and allow 3D data to be transferred between most 3D software products. Some people have been misled to believe VRML2 is an obsolete "WEB streaming" file format but in fact VRML2/X3D are the main industry 3D standardized file formats. This exporter is extremely well developed and robust. Other related links on the Okino WEB site:

Archipelis.com Get started Introduction Thank you for using Archipelis Designer 4.0.