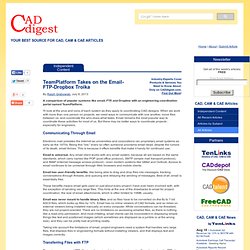 Only on CADdigest.com. Find Out More! By Ralph Grabowski, July 8, 2013 A comparison of popular systems like email, FTP, and Dropbox with an engineering coordination portal named TeamPlatform. I'll look at the pros and cons of each system as they apply to coordinating CAD designs. Communicating Through Email Electronic mail predates the Internet as universities and corporations ran proprietary email systems as early as the 1970s.

Email is universal. Email has user-friendly benefits, like being able to drag and drop files into messages, tracking conversations through threads, and queuing and delaying the sending of messages. These benefits means email gets used on just about every project I have ever been involved with, with the exception of sending very large files. Email was never meant to handle binary files, and so files have to be converted on-the-fly to 7-bit ASCII files, which bulks up files by 12%. Communications Cost. The end of single PLM database architecture is coming. How Sales Complexity impacts startup viability. There is no question that success for the entrepreneur starts with a breakthrough (or at the very least great) product or service. 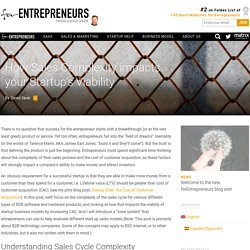 Yet too often, entrepreneurs fall into the “field of dreams” mentality (in the words of Terence Mann, AKA James Earl Jones: “build it and they’ll come”). But the truth is that defining the product is just the beginning. Entrepreneurs must spend significant time thinking about the complexity of their sales process and the cost of customer acquisition, as these factors will strongly impact a company’s ability to make money and attract investors. An obvious requirement for a successful startup is that they are able to make more money from a customer than they spend for a customer, i.e. Lifetime value (LTV) should be greater than cost of customer acquisition (CAC) (see my prior blog post, Startup Killer: the Cost of Customer Acquisition). 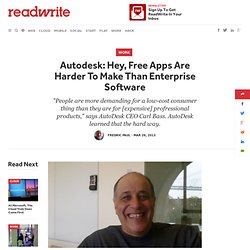 "People are more demanding for a low-cost consumer thing than they are for [expensive] profressional products," Bass told me in a sit-down at the company's slick gallery space in downtown San Francisco. "The cheapest things have to be the easiest to use," he explained. They don't get a user manual or training classes to show people how to use them. From AutoCad To Apps That's a big deal to Autodesk, which made its name with high-end design and engineering software like AutoCad and Revit, but has made an aggressive move into smartphone and tablet apps in the last few years. And it's especially releveant because on Tuesday morning the company introduced Autodesk ReCap, the "industrial strength" version of the free consumer product called 123D Catch, introduced in 2012.

WorldCAD Access. WorldCAD Access. An in-depth look at Autodesk’s cloud-enabled, hybrid MCAD modeling software Reprinted with permission of Design Engineering, October 16, 2013by Ralph Grabowski In response to the CAD industry’s direct modeling mania, Autodesk first announced Inventor Fusion—a desktop installed 3D modeler that combined freeform and solid modeling in a history-free environment—as tech demo on June 24, 2009. Four years later, Autodesk similarly picked June 25 of this year to publicly announce Fusion 360, a cloud-enabled version of the original, thereby adding a modeling component its line of 360 products (including Simulation, PLM and BIM). Fusion 360 is hybrid software in two ways. For one, it’s not a pure cloud-only app running in a Web browser. CAD – Box Help. This isn't a request for tech support as much as I hope a start of discussion. 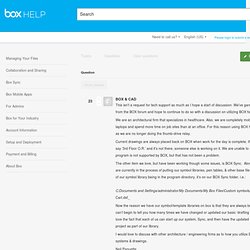 We've garnered quite a bit of info from the BOX forum and hope to continue to do so with a discussion on utilizing BOX for architecture. We are an architectural firm that specializes in healthcare. Also, we are completely mobile as we all operate on laptops and spend more time on job sites than at an office. For this reason using BOX has been immensely helpful as we are no longer doing the thumb-drive relay. Current drawings are always placed back on BOX when work for the day is complete. The other item we love, but have been working though some issues, is BOX Sync. C:Documents and Settings/administrator/My Documents/My Box Files\Custom symbols/Medical Equipment/-Crash Cart.dsf_ Why CAD is not moving to the cloud (quite yet)

My last post was about the integrations of different SaaS applications. 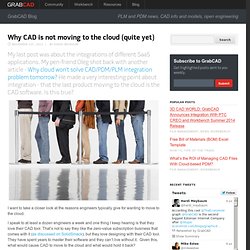 My pen-friend Oleg shot back with another article - Why cloud won’t solve CAD/PDM/PLM integration problem tomorrow? He made a very interesting point about integration - that the last product moving to the cloud is the CAD software. Is this true? I want to take a closer look at the reasons engineers typically give for wanting to move to the cloud. CAD in the Cloud? What you really want is cloud-based PDM! There has been a lot of talk lately about “CAD in the cloud” - but I think there is an important distinction to make when discussing this. 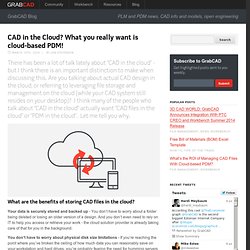 Are you talking about actual CAD design in the cloud, or referring to leveraging file storage and management on the cloud (while your CAD system still resides on your desktop)? PDM weakest link. Is Cloud-Based CAD Ready for Prime Time? Part 1. 31 May, 2014By: Alex Herrera Herrera on Hardware: Centralized, server-side graphical computing technology is on the upswing. 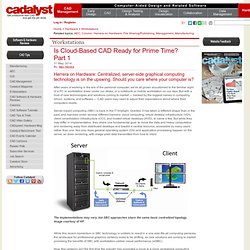 Should you care where your computer is? After years of working in the era of the personal computer, we've all grown accustomed to the familiar sight of a PC or workstation tower under our desks, or a notebook or mobile workstation on our laps. But with a host of new technologies and solutions coming to market — backed by the biggest names in computing silicon, systems, and software — CAD users may need to adjust their expectations about where their computers reside. CAD report - Jon Peddie Research Publications. Jon Peddie Research is pleased to inform you about our latest release, the 2012 market study on the CAD industry. 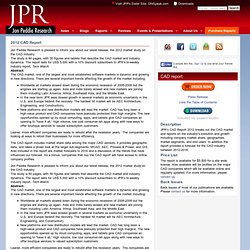 The study is 80 pages, with 50 figures and tablets that describe the CAD market and industry dynamics. The report sells for US$ 5,000 with a 10% discount subscribers to JPR’s bi-weekly industry report, Tech Watch. Abstract: The CAD market, one of the largest and most established software markets is dynamic and growing in new directions. There are several important trends affecting the growth of the market including: Worldwide all markets slowed down during the economic recession of 2008-2009 but the engines are starting up again.