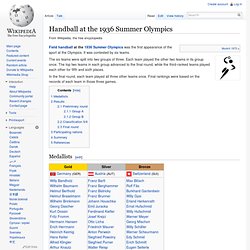 It was contested by six teams. The six teams were split into two groups of three. Each team played the other two teams in its group once. The top two teams in each group advanced to the final round, while the third-ranked teams played each other for fifth and sixth places. In the final round, each team played all three other teams once. Medallists[edit] Results[edit] Preliminary round[edit] Group A[edit] Group B[edit] Classification 5/6[edit] Final round[edit] Participating nations[edit] Each country was allowed to enter a team of 22 players and they all were eligible for participation. 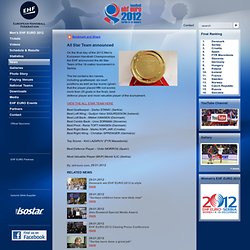 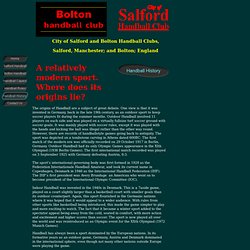 One view is that it was invented in Germany, back in the late 19th century, as an outdoor sport to keep soccer players fit during the summer months. Outdoor Handball involved 11 players on each side and was played on a virtually fullsize turf soccer ground with soccer goals. It was mainly played with soccer rules, except it was played with the hands and kicking the ball was illegal rather than the other way round. However, there are records of handballstyle games going back to antiquity. The sport was depicted on a tombstone carving in Athens dated 600BC. Handball Rules. So What Is Handball? 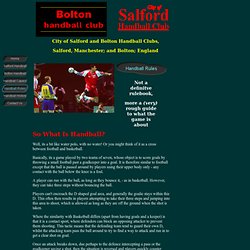 Well, its a bit like water polo, with no water! Or you might think of it as a cross between football and basketball. Basically, its a game played by two teams of seven, whose object is to score goals by throwing a small football past a goalkeeper into a goal. It is therefore similar to football except that the ball is passed around by players using their upper body only - any contact with the ball below the knee is a foul. A player can run with the ball, as long as they bounce it, - as in basketball. Players can't encroach the D shaped goal area, and generally the goalie stays within this D. Where the similarity with Basketball differs (apart from having goals and a keeper) is that it is a contact sport, where defenders can block an opposing attacker to prevent them shooting. What skills are required? Obviously the ability to catch and throw a ball. 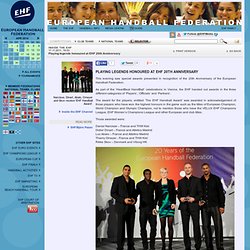 As part of the ‘HeartBeat HandBall’ celebrations in Vienna, the EHF handed out awards in the three different categories of ‘Players’, ‘Officials’ and ‘Partners’. The award for the players, entitled ‘The EHF Handball Award’ was awarded in acknowledgement of those players who have won the highest honours in the game such as the titles of European Champion, World Champion and Olympic Champion, not to mention those who have the VELUX EHF Champions League, EHF Women’s Champions League and other European and club titles. 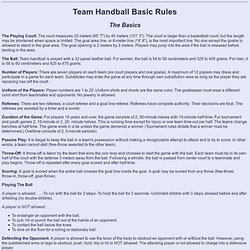 The court is larger than a basketball court, but the length may be shortened when space is limited. The goal area line, or 6-meter line (19' 8"), is the most important line. No one except the goalie is allowed to stand in the goal area. The goal opening is 2 meters by 3 meters.