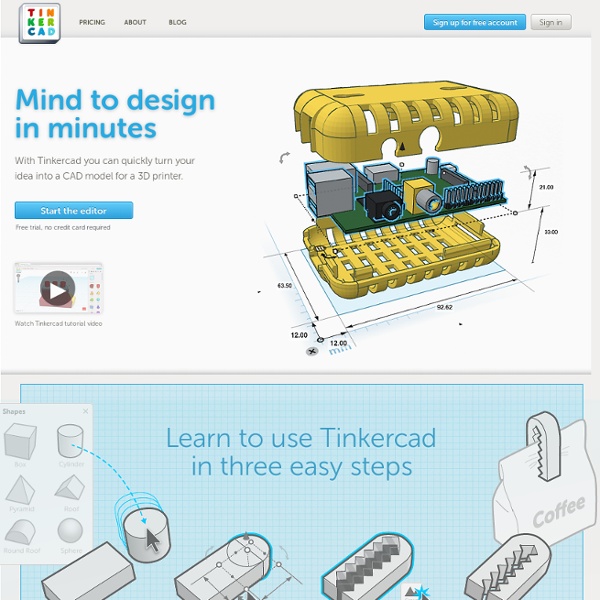 I'm building a WebGL modelling tool for 3D printing 2 weeks ago Father Christmas delivered a MakerBot Thing-O-Matic 3D Printer to my office. I think I understand how it must have felt to own an Altair 8800 back in the day when the world was on the brink of the consumer computing revolution. Consumer 3D printing could be another such revolution. But to print something in 3D you have to create a 3D model, and my survey of the software tools available for 3D modelling has been very disappointing. They broadly fall into the following categories: Expensive to very expensive professional products. Expensive to very expensive tools are tools like AutoCAD and Autodesk Inventor. Applications that have modelling capabilities but are aimed at rendering are those such as Blender , Maya and 3D Studio Max. I would puth Sketchup , OpenSCAD and 3D Tin into the "free but limited/difficult to use" category. I was on a team that developed an advanced 3D modeller as part of an engineering tool suite earlier in my career, so I know what's possible.

Portable, super-high-resolution 3-D imaging By combining a clever physical interface with computer-vision algorithms, researchers in MIT’s Department of Brain and Cognitive Sciences have created a simple, portable imaging system that can achieve resolutions previously possible only with large and expensive lab equipment. The device could provide manufacturers with a way to inspect products too large to fit under a microscope and could also have applications in medicine, forensics and biometrics. The heart of the system, dubbed GelSight, is a slab of transparent, synthetic rubber, one of whose sides is coated with a paint containing tiny flecks of metal. When pressed against the surface of an object, the paint-coated side of the slab deforms. Cameras mounted on the other side of the slab photograph the results, and computer-vision algorithms analyze the images. Video: Micah Kimo Johnson Although GelSight’s design is simple, it addresses a fundamental difficulty in 3-D sensing.

An Open Web-based 3D Modeling Program for 3D Print… and More - SolidSmack There are only a few things that get me excited: mild shocks, alligator punching and web-based 3D. I wish I could say the following combined all three, but two outta three ain’t too shabby. Benjamin Nortier from London, UK has done the unthinkable. He’s taken it upon himself to develop a free, parametric 3D modeling program for the browser, whereby combining alligator punching mild shock and web-based 3D. He’s just started down the path of shaking up the 3D modeling possibilities, but as you’ll see, he’s already able to go from model to 3D print. Putting 3D Modeling in the Browser For a breakdown of what inspired Benjamin to take this on, and why other modeling programs are not adequate, you can read his thoughts at his blog. Benjamin’s goals is for a 3D modeler which: is cheap, free or opensourceis parametric and has variables for complex modelshas a productive UI The only thing I’d add to that is cross-platform. There are three components he’s using to make all of this possible:

Blog: Around the RepRap Community 08/06/2011 RepRap Cousins in Zero G! Made in Space, a space startup founded to leverage 3d printing as a manufacturing tool in space, has operated 2 RepRap Cousin Projects in Zero G. They took what looks like a Makerbot Cupcake with what looks to be a stock DC gearmotor extruder in this image, a Makerbot Thing o Matic, and a Bits from Bytes 3000 on a ride doing Parabolic dives in a Zero G airplane. Sfact by Action68 Sfact might look like Skein forge, but it's a long way from it. Pronterface, UPGRADE! Pronterface, Kliment's Host program for RepRap, is evolving like no program I have ever seen. -Executable versions of both Pronterface and Sfact can now be found here. -Garyhogdson has added a truly amazing quick setup menu for Sfact integrated into Pronterface, you can change all the most tweaked settings from 1 screen... -Integrated Gcode editing -SD card support -Custom Gcode buttons addable in GUI -LOTS more Hall-O Hall Effect Sensor by Ruben-Ikmaak

Autodesk Releases Free App That Brings 3-D Printing To The Masses [Video] | Co.Design If you hear "maker culture" and instantly think of grease-stained weirdos who drone on about steampunk and "screws not glue"... well, you wouldn't be wrong. But when a giant software company like Autodesk throws its weight behind "makers," you know it's much more than a subculture. "There was this huge digital content generation that emerged, but now that 'Generation C' is turning into 'M,' the Make generation," Tatjana Dzambazova, Senior Product Manager at Autodesk, tells Co.Design. 123D lets you easily fabricate objects, not just visualize them. 123D differs from other free 3-D modeling software like Google Sketchup in that it's designed to let you easily fabricate objects, not just visualize them. Because 123D has physical output in mind, it includes ingenious features like a "shell" command that turns any solid digital model hollow, which makes it much faster and cheaper print. Autodesk intends 123D to be simple enough to play with like a toy. [Download 123D for free here]

Main Page - Fab @ Home 3D Printing Solutions The power of CADspan is the geometry resurfacer; a new approach to file preparation for 3D printing. Rather than assume that the input data has been created with a solid modeling program and the file might need repair, repositioning, slicing or scaling, CADspan simply takes the approach that what you see on your screen looks like a model that should be printable. The CADspan engine uses your geometry to perform a virtual 'shrink-wrap' and outputs an entirely new STL file that describes the exterior of your CAD file. This new STL file is a single, solid object, ready to 3D print. FAQs Who uses CADspan? Why do I need CADspan? What does CADspan do? Which version do I need? More FAQs on Help Page CADspan In The News CADspan has been getting more and more attention lately. Developers and Resellers Interested in reselling or developing for CADspan?

Shapesmith – An Open Source Web-based 3D Modeler EmailShare 4EmailShare iPhone dock created in Shapesmith and printed on Thing-O-Matic How can I model the thing I want to print? As the population of 3D printer operators continues to grow, answering that question will become more important than ever. Combining parametric modeling and a clean UI, browser-based Shapesmith hopes to provide an open source answer. The developer, MakerBot operator, and Thingizen Benjamin Nortier tells us all about it. Q: Who are you and what is Shapesmith? I’m a software developer with an Engineering background and I’m also a 3D printing enthusiast. I wanted to design an Unmanned Aerial Vehicle (UAV) after being inspired by DIY Drones. Because I had worked on a 3D CAD tool for electromagnetic simulation earlier in my career, I was very dissatisfied by the free design tools that were available. Q: Why did you decide to open source it under the Apache license? Two of my favourite open-source projects, Riak and CouchDB, are licensed under Apache. And Javascript!