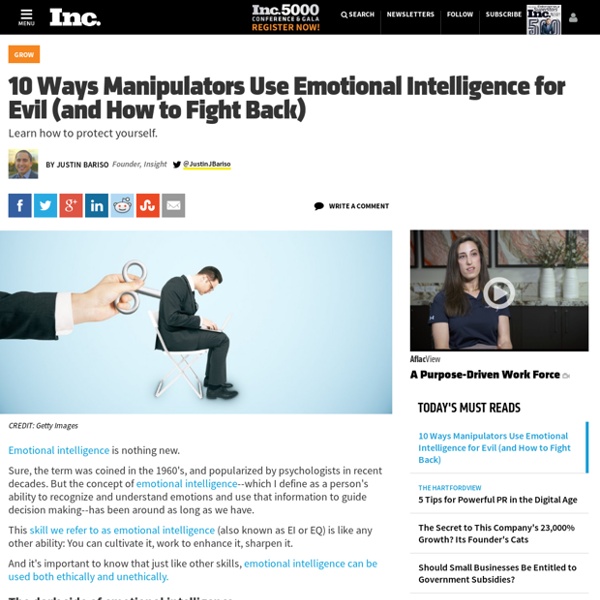 Emotional intelligence is nothing new. Sure, the term was coined in the 1960's, and popularized by psychologists in recent decades. But the concept of emotional intelligence--which I define as a person's ability to recognize and understand emotions and use that information to guide decision making--has been around as long as we have. This skill we refer to as emotional intelligence (also known as EI or EQ) is like any other ability: You can cultivate it, work to enhance it, sharpen it. And it's important to know that just like other skills, emotional intelligence can be used both ethically and unethically. The dark side of emotional intelligence Organizational psychologist and best-selling author Adam Grant identified EI at its worst in his essay for The Atlantic, The Dark Side of Emotional Intelligence: "Recognizing the power of emotions...one of the most influential leaders of the 20th century spent years studying the emotional effects of his body language. 1. 2. 3. 4. 5. 6. 7. 8. 9. 10.

True cost of Louisiana Purchase was theft of Indigenous people's lands Wikimedia Commons/White House Historical Association It’s a familiar chapter in our history, part of the triumphant narrative of westward expansion: In 1803, the United States bought a massive chunk of North America, and we got it for a song. Spain had ceded the Louisiana Territory to France, and Napoleon, in turn, offloaded it to American diplomats in Paris after the Haitian Revolution ruined his plans for the New World. Vaguely defined at the time as the western watershed of the Mississippi River, and later pegged at about 827,000 square miles, the acquisition nearly doubled the national domain for a mere $15 million, or roughly $309 million in today’s dollars. Divide the area by the price and you get the Louisiana Purchase’s celebrated reputation as one of the greatest real estate bargains in history. Historians have long known that Indians were paid something for their soil rights, but we’ve never been able to say how much.

If Jeff Sessions Will Not Resign, He Should Be Impeached Article II, Section 4 of the Constitution of the United States announces that “The President, Vice President and all civil Officers of the United States, shall be removed from Office on Impeachment for, and Conviction of, Treason, Bribery, or other high Crimes and Misdemeanors.” The attorney general of the United States is a civil officer. If he has lies under oath to the Senate, that act demands impeachment.

UN experts denounce 'myth' pesticides are necessary to feed the world The idea that pesticides are essential to feed a fast-growing global population is a myth, according to UN food and pollution experts. A new report, being presented to the UN human rights council on Wednesday, is severely critical of the global corporations that manufacture pesticides, accusing them of the “systematic denial of harms”, “aggressive, unethical marketing tactics” and heavy lobbying of governments which has “obstructed reforms and paralysed global pesticide restrictions”. The report says pesticides have “catastrophic impacts on the environment, human health and society as a whole”, including an estimated 200,000 deaths a year from acute poisoning. Its authors said: “It is time to create a global process to transition toward safer and healthier food and agricultural production.” The world’s population is set to grow from 7 billion today to 9 billion in 2050.

Fundamentalists hacked my husband to death. The same hate is spreading across the world I have no memory of the attack, but the pictures of my husband’s bloody, motionless body on the street, me next to him pleading for help, the four large stab wounds on my head and a sliced-off thumb, will remind me forever of the hatred and intolerance that changed my life. Our assailants, armed with machetes, were Islamists who on 26 February 2015, ambushed us while we were visiting our homeland, Bangladesh, for a book-signing trip. They hacked my husband, Avijit Roy, to death and left me gravely injured. Why did we deserve such violence? Because fundamentalists were threatened by our writings – on science, philosophy and criticism of religious dogma – and they identified us as enemies of Islam.

Google’s featured snippets are worse than fake news Peter Shulman, an associate history professor at Case Western Reserve University in Ohio, was lecturing on the reemergence of the Ku Klux Klan in the 1920s when a student asked an odd question: Was President Warren Harding a member of the KKK? Shulman was taken aback. He confessed that he was not aware of that allegation, but that Harding had been in favor of anti-lynching legislation, so it seemed unlikely.

'Gun for hire': how Jeff Sessions used his prosecuting power to target Democrats Arthur Outlaw wanted a second term. It was 1989 and Outlaw, the Republican mayor of Mobile, Alabama, was girding himself for his re-election campaign. Word was that Lambert Mims, a popular local Democrat, would run against him. Sanders: GOP health care plan gives wealthiest a $275 billion tax break Sen Bernie Sanders, I-Vt., put a different spin on the Republican House’s plan to overhaul the health care system. Speaking on MSNBC, Sanders said the House plan isn’t really a health care plan at all. It’s a tax cut package, he says, that overwhelmingly helps the wealthy. "Look at it as a tax plan with $275 billion in tax breaks for the top 2 percent, people earning $250,000 a year or more," Sanders said on All In With Chris Hayes March 8.

Monica Lewinsky and the Trope of the Jewish Temptress in the Trump Age While we as a nation prepare for the presidential debates between Hillary Clinton and Donald Trump — the first one is slated to take place at Hofstra University on September 26 — much is being written about each candidate’s debate prep. Trump is battening down the hatches by taking advice from former Fox News chairman and many-time sexual harassment accusee Roger Ailes. Clinton, for her part, is searching for a sparring partner to ready herself for the fight ahead. There are many things that Clinton could legitimately be taken to task for — her hawkishness, allegations of corruption and ties to big banks and Wall Street, to name a few. But one particularly problematic subject of focus when it comes to her debate prep — as pointed out by a recent Politico article — is Monica Lewinsky.

Say It With Me Again: James Comey Elected Donald Trump President Engagement Labs is a company that tracks "what people are talking about." Brad Fay, one of their executives, tells us that during the presidential campaign people were talking very negatively about everyone. They were more negative about Donald Trump, but they were plenty negative about Hillary Clinton too. However, the gap between the candidates changed from time to time based on external events: Most decisively, there was a sudden change in the net sentiment results that followed immediately after FBI Director James Comey released his Oct. 28 letter to Congress about a renewed investigation of Clinton emails. Immediately afterwards, there was a 17-point drop in net sentiment for Clinton, and an 11-point rise for Trump, enough for the two candidates to switch places in the rankings, with Clinton in more negative territory than Trump.