Log In - New York Times. The GOP's conversion to a 'political sociopath' The GOP Is a Dying Party. That’s Why I’m Running Against Trump. As a former Republican, I’m shocked that the party of Abraham Lincoln is nominating a man with a vision of America that doesn’t even resemble that of the party I once knew. 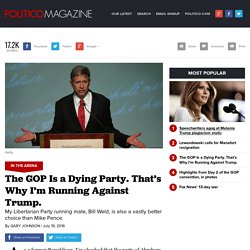 And his vice presidential pick, Mike Pence, who as governor of Indiana has left a record of division in his state, only makes matters worse. Despite the calls at the GOP convention in Cleveland for national unity, Donald Trump sees our country as a land of exclusion. He wants Americans to act as powerless serfs bullied by someone who says he will protect them. Throughout world history, that has been the calling card of Big Government autocrats. Story Continued Below His character assaults are unbounded. 11,000 failed attempts to change America. Reading Hillary Clinton's hidden thesis - politics - Decision '08 - Hillary Clinton News. WELLESLEY, Mass. — The senior thesis of Hillary D. 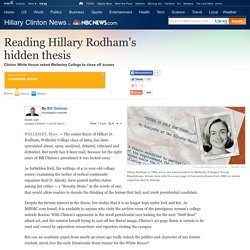 Rodham, Wellesley College class of 1969, has been speculated about, spun, analyzed, debated, criticized and defended. But rarely has it been read, because for the eight years of Bill Clinton’s presidency it was locked away. As forbidden fruit, the writings of a 21-year-old college senior, examining the tactics of radical community organizer Saul D. Alinsky, have gained mythic status among her critics — a “Rosetta Stone,” in the words of one, that would allow readers to decode the thinking of the former first lady and 2008 presidential candidate. Despite the fervent interest in the thesis, few realize that it is no longer kept under lock and key. But can an academic paper from nearly 40 years ago really unlock the politics and character of any former student, much less the early Democratic front-runner for the White House?

This is your chance to decide before the political spin machines get their hands on it. Review: History Lincoln's Republican Party Heather Cox Richardson. Unconscious Reactions Separate Liberals and Conservatives. More practically, instead of trying to change people's emotional state (an effect that is temporary), astute policy makers might be able to phrase their ideas in a way that appeals to different worldviews. 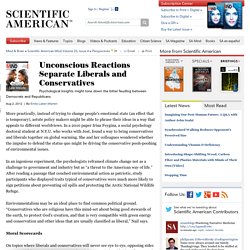 In a 2010 paper Irina Feygina, a social psychology doctoral student at N.Y.U. who works with Jost, found a way to bring conservatives and liberals together on global warming. She and her colleagues wondered whether the impulse to defend the status quo might be driving the conservative pooh-poohing of environmental issues. In an ingenious experiment, the psychologists reframed climate change not as a challenge to government and industry but as “a threat to the American way of life.” After reading a passage that couched environmental action as patriotic, study participants who displayed traits typical of conservatives were much more likely to sign petitions about preventing oil spills and protecting the Arctic National Wildlife Refuge. Moral Scorecards. Lone Star Crazy: How Right-Wing Extremists Took Over Texas. Jimmy Smith's ranch sits on the Texas side of the Texas-Oklahoma border, in a little town called Burkburnett, named after a wolf-hunting buddy of Teddy Roosevelt's. 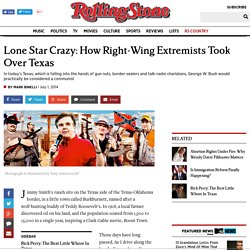 In 1918, a local farmer discovered oil on his land, and the population soared from 1,500 to 15,000 in a single year, inspiring a Clark Gable movie, Boom Town. Rick Perry: The Best Little Whore In Texas Those days have long passed. As I drive along the lonely dirt road wending through Smith's property, the only Texas movie that comes to mind is the one about chain-saw massacres. Obnoxiousness Is the New Charisma. Photo IN a typical presidential campaign, the most successful candidates lay claim to leadership with their high-mindedness. 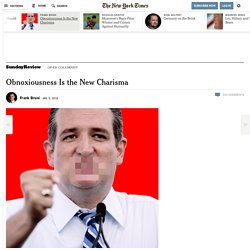 They reach for poetry. They focus on lifting people up, not tearing them down. They beseech voters to be their biggest, best selves. Not the two front-runners in this freaky Republican primary. If you’re not with them, you’re a loser (Donald Trump’s declaration) or you’re godless (Ted Cruz’s decree, more or less). Obnoxiousness is the new charisma. Sure, we’ve had contenders like them before. Cruz just finished up a dominant week, besting Trump in a poll of California Republicans, drawing swarms of reporters to his bus tour through Iowa, prompting ever surer predictions of triumph in that state.

He “has plainly become the candidate to beat in the caucuses,” Jonathan Martin and Matt Flegenheimer wrote in The Times, sketching a scenario in which “he could also quickly become something else: the de facto party nominee.” Donald Trump vs. Hillary Clinton: Voting Your Conscience. The basic facts are these. 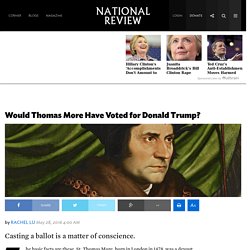 St. Thomas More, born in London in 1478, was a devout Catholic, and also one of the most incisive legal minds of his day. Upon entering the service of King Henry VIII, he made clear that he believed the king’s marriage to Catherine of Aragon to be valid and thus not annullable. Initially, Henry claimed to respect More’s views, but over time his resolve to re-marry hardened.