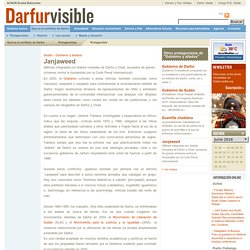 United Nations Photo. “Men With No Mercy” Since 2003 an armed conflict between the government of Sudan and rebel groups has ravaged Sudan’s western region of Darfur. 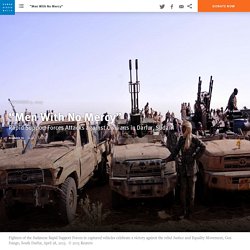 Darfur’s civilian population has suffered enormously throughout the conflict. The United Nations (UN) estimates that over 300,000 people have been killed by violence or conflict-induced disease, starvation, or dehydration. Thousands of villages and countless livelihoods have been destroyed. Sexual violence against women and girls has been widespread. La Jornada en línea.

65 271 1 PB. Ontario Human Rights Commission. As part of a government program, Darlene, a grade 12 graduate, got a job with a local garden nursery. 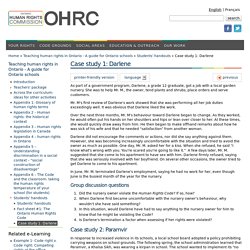 She was to help Mr. M., the owner, tend plants and shrubs, place orders and serve customers. Mr. M's first review of Darlene's work showed that she was performing all her job duties exceedingly well. It was obvious that Darlene liked the work. Over the next three months, Mr. Darlene did not encourage the comments or actions, nor did she say anything against them. In June, Mr. Group discussion questions. 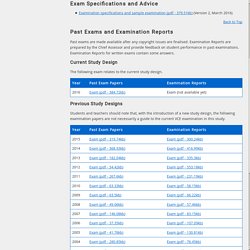 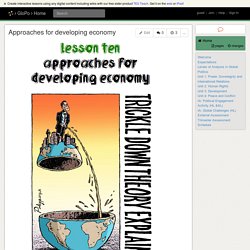 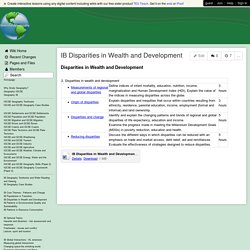 Globalization. Debate abounds over whether globalization is good or bad for the individual, the family, the nation, and the world. 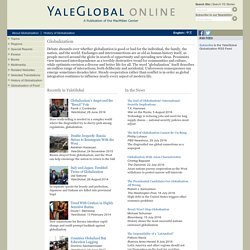 Exchanges and interconnections are as old as human history itself, as people moved around the globe in search of opportunity and spreading new ideas. Pessimists view increased interdependence as a terribly destructive trend for communities and culture, while optimists envision a diverse and better life for all. The word “globalization” itself describes an endless range of interactions, both deliberate and accidental.

Unforeseen consequences can emerge sometimes decades later. Steady cooperation rather than conflict is in order as global integration continues to influence nearly every aspect of modern life. Links and Resources on Globalization. A group that focuses on aspects of the Mexican-US relationship but also provides information on many other issues of globalization. 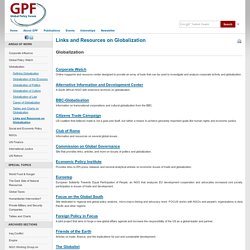 International Centre For Trade and Sustainable Development Site that provides articles and other resources while focusing on issues of development and the environment in the context of globalization. International Gender and Trade Network A system of seven autonomous regional networks that analyzes trade's impact on women, families and communities. Pr6. VN Forced Labor Centers wr. Red Hand Day. Red Hand protests in ColombiaThere are thousands of child soldiers in Colombia in guerrilla and paramilitary groups and criminal gangs. 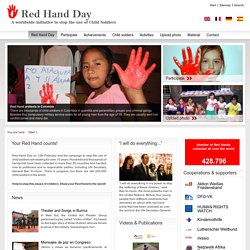 Besides this, compulsory military service exists for all young men from the age of 18. They are usually sent into conflict zones and many die. It's so easyJust put red paint on your hand, press your hand onto a piece of paper, let it dry, add your name, city and message and send it to politicians to put pressure on them to support the campaign and make improvements! Perspectives142. Titled. Following is the text of UN Secretary-General Ban Ki-moon’s address at an event on “Responsible Sovereignty: International Cooperation for a Changed World”, in Berlin, today, 15 July: It is an honour to be with you. 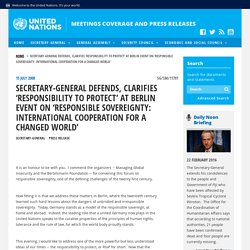 I commend the organizers -- Managing Global Insecurity and the Bertelsmann Foundation -- for convening this forum on responsible sovereignty, one of the defining challenges of the twenty-first century. How fitting it is that we address these matters in Berlin, where the twentieth century learned such hard lessons about the dangers of unbridled and irresponsible sovereignty. Today, Germany stands as a model of the responsible sovereign, at home and abroad. Indeed, the leading role that a united Germany now plays in the United Nations speaks to the curative properties of the principles of human rights, tolerance and the rule of law, for which the world body proudly stands. ICISS Report.pdf. Titled. The United Nations Commodity Trade Statistics Database (UN Comtrade) was established in the early 1960s. For almost fifty years, it has provided a wealth of trade information to policy makers, business community, research institutions and the general public. It stores standardised official annual trade statistics reported by countries and reflecting international merchandise flows detailed by commodity and partner country with coverage reaching up to 99 percent of world merchandise trade.

The United Nations Statistical Commission at its forty-first session held on 23-26 February 2010 recognized the importance of UN Comtrade as the global database and information platform and requested UNSD to enhance its features and metadata. Titled. What's Race Got to Do with It? - TOOLBOX / Engagement Games / Starpower. Copyright 2004.