Flickr (Money In Politics) Cornel West & Chris Hedges - Legalized Bribery. How ‘Citizens United’ is helping Hillary Clinton win the White House. Shining light on Clinton ‘dark money’ A look at specific contributions to the super PACs supporting Clinton shows just how difficult it can be to unravel who is really writing the checks. 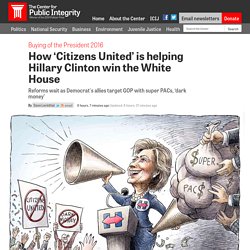 For example, federal records show that on June 29, super PAC Priorities USA Action received $1 million from an outfit called Fair Share Action. Fair Share Action, too, is a super PAC — a liberal one that says it works to “elect public officials who stick up for working families.” The big check followed its earlier $5,000 contribution to Ready for Hillary PAC.

So who funds Fair Share Action? But neither Environment America Inc. nor Fair Share Inc. is required to comprehensively or publicly reveal its donors, because as “social welfare” groups that can’t primarily focus on electoral politics, federal law says they don’t have to. Wendy Wendlandt, acting director for both Fair Share Action and Fair Share Inc., declined to volunteer the names or contribution amounts of Fair Share Inc.’s donors. Super PAC Backer Says Big Money Entitles Donors to Campaign “Oversight” AL HOFFMAN, A FLORIDA real estate developer and ambassador to Portugal during the George W. 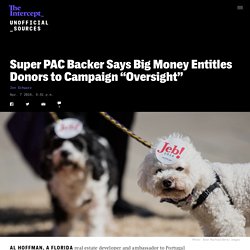 Bush administration, gave over a million dollars in 2015 to Right to Rise, the Super PAC supporting Jeb Bush’s Titanic-like presidential campaign. Rather than acknowledge that he feels silly, however, Hoffman is trying to make himself sound noble.

Follow The Money. Money in Tennesse Politics. Multinational Conflits of Interest (Money in Politics) Not so supreme a court. Political Money in Science. Oligarchy in the United States. Superpacs & Other Lobbying Groups - Super PAC (Political Action Committee) - pacs. Tools (money in politics) The Investment Theory of Politics. US Foriegn Aid. Banks Have Become the Permanent Government of Europe. Photo Credit: Shutterstock.com March 29, 2014 | Like this article? 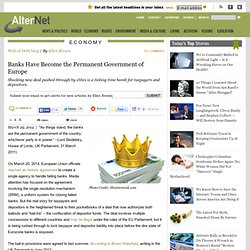 Join our email list: Stay up to date with the latest headlines via email. "As things stand, the banks are the permanent government of the country, whichever party is in power.” On March 20, 2014, European Union officials reached an historic agreement to create a single agency to handle failing banks. Documents released in open records lawsuit show lobbying group pulling legislators' strings. At a meeting last spring of a national group that drafts conservative legislation, Sen. 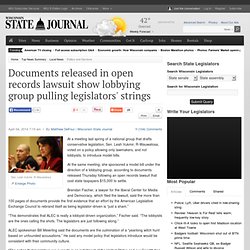 Leah Vukmir, R-Wauwatosa, voted on a policy allowing only lawmakers, and not lobbyists, to introduce model bills. At the same meeting, she sponsored a model bill under the direction of a lobbying group, according to documents released Thursday following an open records lawsuit that cost state taxpayers $15,000 to settle. Brendan Fischer, a lawyer for the liberal Center for Media and Democracy, which filed the lawsuit, said the more than 100 pages of documents provide the first evidence that an effort by the American Legislative Exchange Council to rebrand itself as being legislator-driven is “just a sham.” Gilens and Page 2014-Testing Theories 3-7-14.pdf.

Looks like the Kochs want to piss away millions again, just like they did in 2012. David Nir wrote earlier about the millions of dollars the Kochs have wasted in Michigan this cycle: Remarkably, despite all that heavy ad spending (and Obamacare lies exposed as b.s.) from Americans for Prosperity, [Democratic Senate candidate Gary] Peters' favorables have barely budged, from 21-22 late last year to 26-27 now. 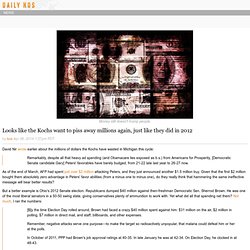 As of the end of March, AFP had spent just over $2 million attacking Peters, and they just announced another $1.5 million buy. Given that the first $2 million bought them absolutely zero advantage in Peters' favor abilities (from a minus one to minus one), do they really think that hammering the same ineffective message will bear better results? Princeton Concludes What Kind of Government America Really Has, and It's Not a Democracy.

The news: A new scientific study from Princeton researchers Martin Gilens and Benjamin I. 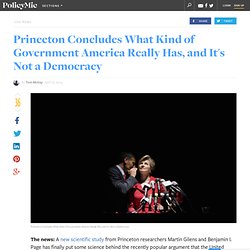 Page has finally put some science behind the recently popular argument that the United States isn't a democracy any more. The Most Elitist, Disgusting Supreme Court Has Rigged the Whole System in Favor of the Rich. Supreme Court Justice Antonin Scalia on "FOX News Sunday" on July 27, 2013. 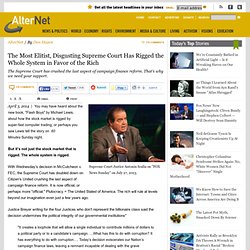 April 3, 2014 | Wendell Potter & Nick Penniman: Nation on the Take. Which Companies Buy Elections? A Scary State-By-State Map. What Shrinking Newsrooms Mean In The Age Of The Koch Brothers And Billionaire Donors. Back during the not-so-distant glory days of New Jersey's Star-Ledger reign as a regional newspaper powerhouse, the Newark, New Jersey newsroom in the 2000's was bursting with 350 journalists who covered the entire state and pocketed Pulitzers for their coverage of local politicians. 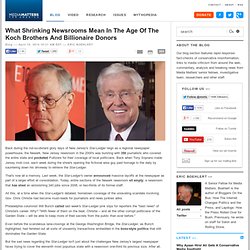