EU criticises Turkey over human rights and democracy. Equal Pay Day: Gender Earnings Gap Marked By Women Effectively Working For Free Until December 31st. From today, women in Britain will work the rest of the year for free. 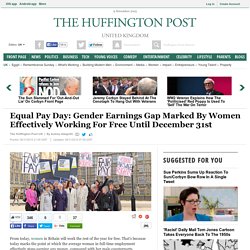 That's because today marks the point at which the average woman in full-time employment effectively stops earning any money, compared with her male counterparts. Industry figures released on November 9 - or 'Equal Pay Day', as campaigners have labelled it - reveal that the gap in earnings between men and women working full-time is now 14.2 per cent, the equivalent of 52 days of work. David Cameron 'deadly serious' about need for EU reform. David Cameron has said he is "deadly serious" about securing EU reforms and said that if his renegotiations failed "we will have to ask ourselves - 'is this organisation for us? 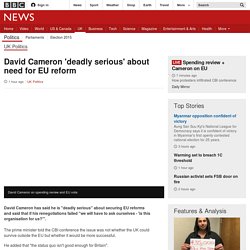 '". The prime minister told the CBI conference the issue was not whether the UK could survive outside the EU but whether it would be more successful. He added that "the status quo isn't good enough for Britain". The PM is to set out his reform proposals in detail on Tuesday. Students urged to back counter-radicalisation programme - BBC News. Image copyright LuckyBusiness The National Union of Students (NUS) is being urged by ministers to support the government's counter-radicalisation programme, Prevent. 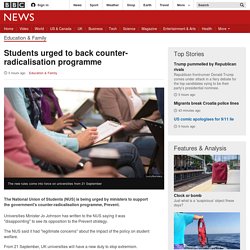 Universities Minister Jo Johnson has written to the NUS saying it was "disappointing" to see its opposition to the Prevent strategy. The NUS said it had "legitimate concerns" about the impact of the policy on student welfare. From 21 September, UK universities will have a new duty to stop extremism. Jeb Bush Calls For Margaret Thatcher To Feature On US $10 Bank Bills. US Republican Presidential-hopeful Jeb Bush has claimed Margaret Thatcher should have her face featured on the $10 note. 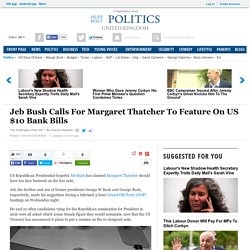 Jeb, the brother and son of former presidents George W Bush and George Bush, respectively, made his suggestion during a televised 3-hour Grand Old Party (GOP) hustings on Wednesday night. He and 10 other candidates vying for the Republican nomination for President in 2016 were all asked which iconic female figure they would nominate, now that the US Treasury has announced it plans to put a woman on the re-designed note. Thatcher was the UK's Prime Minister between 1979 and 1990 Bush suggested Thatcher, saying the former British prime minister had been a "strong leader" who "restored the UK into greatness".

"I would go with Ronald Reagan's partner, Margaret Thatcher," he said yesterday, noting, though, that it was "probably illegal" and unlikely to happen because she was not an American. MI5 boss warns of technology terror risk - BBC News. Advances in technology are allowing terrorists to communicate "out of the reach of authorities" the head of MI5, Andrew Parker has told the BBC. 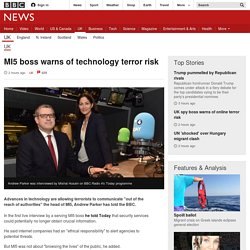 In the first live interview by a serving MI5 boss he told Today that security services could potentially no longer obtain crucial information. He said internet companies had an "ethical responsibility" to alert agencies to potential threats. Schools to offer human rights lessons from US Kennedy project - BBC News. Image copyright Getty Images Human rights lessons are to be offered to schools in England in a project designed by US human rights activist Kerry Kennedy. 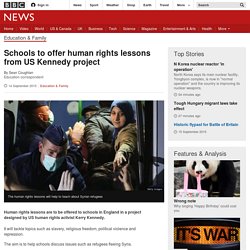 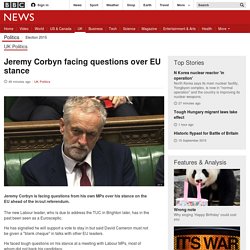 The new Labour leader, who is due to address the TUC in Brighton later, has in the past been seen as a Eurosceptic. Refugee Crisis: 'One In 50 Could Be ISIS Radicals', David Cameron Warned. Islamic State could be sending jihadis out of Syria posing as refugees, a Lebanese government minister has warned. 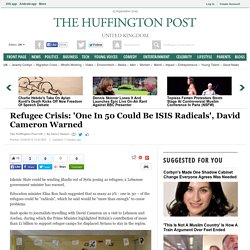 Education minister Elias Bou Saab suggested that as many as 2% - one in 50 – of the refugees could be “radicals”, which he said would be “more than enough” to cause problems. Saab spoke to journalists travelling with David Cameron on a visit to Lebanon and Jordan, during which the Prime Minister highlighted Britain’s contribution of more than £1 billion to support refugee camps for displaced Syrians to stay in the region. Prime Minister David Cameron visits the Sed El Boucrieh School in Beirut with Lebanese Education minister Elias Bou Saab The minister conceded that he had no firm information on terrorist infiltration of refugees, but said his “gut feeling” told him it was happening, the Press Association reports.

New Guidelines on Models' Rights Aim to Fix Industry Wrongs. Dress For Your Body Shape. You are here: Style Makeover Steps > Your Body Shape The Female Horizontal Body Types:Hourglass, Inverted Triangle, Triangle, Rectangle, Diamond, Oval If you like your body shape you are either male or a very unusual female! 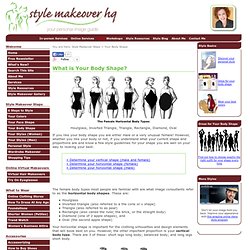 However, whether you like your body or not, if you understand what your current shape and proportions are and know a few style guidelines for your shape you are well on your way to looking your best. The female body types most people are familiar with are what image consultants refer to as the horizontal body shapes. The metrosexual is dead. Long live the 'spornosexual' - Telegraph. Two decades of increasingly out and proud – and highly lucrative – male vanity later, and the metrosexual remains the apple of consumerism’s rapacious eye.

Woman Sues Michigan Police Department For Forced Hijab Removal. By Erica Hellerstein Posted on Share this: "Woman Sues Michigan Police Department For Forced Hijab Removal" Share: Screen shot of Malak Kazan from Fox 2 news segment A 27-year-old Muslim woman is suing the Dearborn Heights Police Department in Michigan after officers allegedly forced her to remove her headscarf while taking a booking photo for a traffic misdemeanor, claiming that their actions violated her right to religious expression. Choice feminism: Time to ‘choose’ another argument. There’s much ado about “choice feminism” lately and some of it surely a bit of healthy autocriticism. If feminism means anything, after all, then it means nothing. “Choice feminism” — the idea that feminism means women can individually choose whatever they wish and consider it an inherently feminist act — is certainly an insidious outgrowth of the commodification of empowerment.

“You’ve Come a Long Way, Baby” has come a long way, branching out into various manifestations of neo-”girl power” and pseudo-feminism promulgated by corporations like Unilever in its many Dove commercials, as well as adverts for makeup and shampoo that seem to subtly sell empowerment as well as a greasy bit of beauty product. 50 Shades Of Angela Merkel. Iranian Women Find Stylish Ways to Abide by the Government's Strict Dress Code. Topshop Gets Called Out For Unrealistic Mannequin Body Standards. By now, it seems as if most retailers have been involved in some sort of controversy.

And while some have been because of tasteless graphics, or hypersexualized advertisements, one thing we continue to see over and over again—and frankly, we're tired of it—is the ridiculous body standards reinforced by the mannequins that model the clothing. Topshop, the popular British brand that boasts collaborations with stars like Gigi Hadid and Cara Delevingne, has come under fire after a shopper noticed that the store's mannequin had extremely thin legs. The mannequin was wearing the retailer's popular "Jamie" jeans, and the shopper, Laura Berry, voiced her concerns that the figure was not an accurate representation of the average female form. "Perhaps it's about time you became responsible for the impression you have on women and young girls and helped them feel good about themselves rather than impose these ridiculous standards," Berry wrote in a post on Topshop's Facebook page.