How road behaviour correlates with trust in government. In the first half of the 20th century, London grew rather a lot. 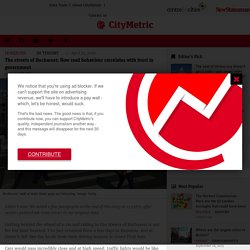 Its official government, however, grew not at all. The result was that, by the 1950s, the city's built up area had achieved a fairly similar form to the one it has today – but the County of London was trapped behind broadly the same boundaries it had held since 1889, and vast swathes of the inner suburbs (Stratford, Acton, Willesden, Tottenham) were left outside. How modern London was broken up before 1965. The pink area in the middle was the 28 metropolitan boroughs included in London County Council. Image: Wikimedia Commons. California Considers a Universal 401(k) retirement plan. California thinks it has a solution to Americans’ woeful preparation for retirement: a near-universal 401(k) plan. 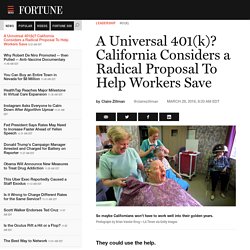 Study Finds 3 Laws Could Reduce Firearm Deaths by 90% Even though over 90 people are killed by guns in the United States every day, gun-control legislation remains a hotly contested and divisive topic. 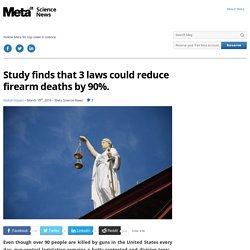 Japan and the whale. Hunting whales is irrelevant to feeding Japan's population, draws global condemnation and is certainly not economic. 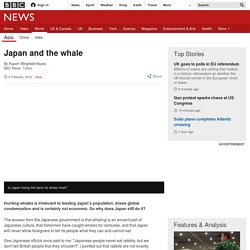 So why does Japan still do it? The answer from the Japanese government is that whaling is an ancient part of Japanese culture, that fishermen have caught whales for centuries, and that Japan will never allow foreigners to tell its people what they can and cannot eat. Denmark's prime minister says Bernie Sanders is wrong to call his country soc... Catalonia's push for independence from Spain - BBC News. Image copyright AFP. 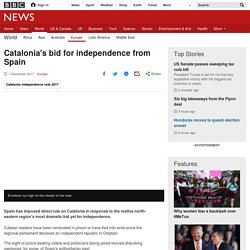 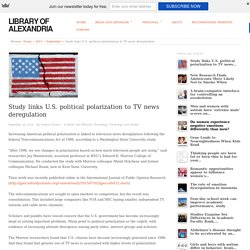 “After 1996, we see changes in polarization based on how much television people are using,” said researcher Jay Hmielowski, assistant professor in WSU’s Edward R. Murrow College of Communication. He conducted the study with Murrow colleague Myiah Hutchens and former colleague Michael Beam, now at Kent State University. Their work was recently published online in the International Journal of Public Opinion Research ( The telecommunications act sought to open markets to competition, but the result was consolidation. Scholars and pundits have voiced concern that the U.S. government has become increasingly inept at solving important problems. The Murrow researchers found that U.S. citizens have become increasingly polarized since 1996. Story source: Press release from Washington State University. Men who explain things. I still don't know why Sallie and I bothered to go to that party in the forest slope above Aspen. 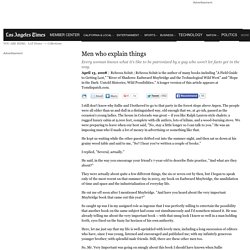 The people were all older than us and dull in a distinguished way, old enough that we, at 40-ish, passed as the occasion's young ladies. The house in Colorado was great -- if you like Ralph Lauren-style chalets: a rugged luxury cabin at 9,000 feet, complete with elk antlers, lots of kilims, and a wood-burning stove. We were preparing to leave when our host said, "No, stay a little longer so I can talk to you. " He was an imposing man who'd made a lot of money in advertising or something like that. The Death of Reddit - How not to build a community. Syrian girl thought the photojournalist was holding a weapon, so she "surrend... 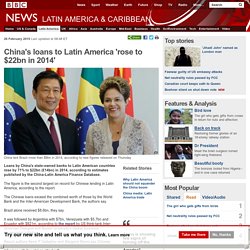 The figure is the second largest on record for Chinese lending in Latin America, according to the report. The Chinese loans exceed the combined worth of those by the World Bank and the Inter-American Development Bank, the authors say. Brazil alone received $8.6bn, they say. It was followed by Argentina with $7bn, Venezuela with $5.7bn and Ecuador with $821m, according to the report by US think-tank Inter-American Dialogue and Boston University's Global Economic Government Initiative. Report authors Kevin P Gallagher and Margaret Myers say Chinese finance is particularly popular with Latin American governments because it "comes with few strings attached". How the LAPD Got Smart and Started Winning the War Against Street Gangs.

The Los Angeles Police Department may have won the fight against street gangs — at least in some critical ways, and at least for the time being. 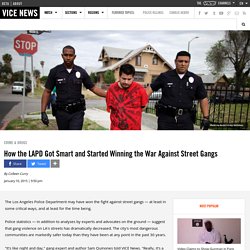 Police statistics — in addition to analyses by experts and advocates on the ground — suggest that gang violence on LA's streets has dramatically decreased. The city's most dangerous communities are markedly safer today than they have been at any point in the past 30 years. "It's like night and day," gang expert and author Sam Quinones told VICE News. "Really, it's a remarkable change. " The story of the city's turnaround — widely credited to a combination of new policing strategies started by former LAPD chief Bill Bratton and the work of community organizations focused on preventing gang recruitment — could serve as a model to cities across the country, police and experts told VICE News.