(1) RT - RT shared a link. RT - In response to a question from Brian Williams concerning a... NextNewsNetwork - JUST IN: Is Obama Moving to National Gun... Left Turn Only - Left Turn Only shared Wisconsin State AFL-CIO's... Pinboard or Pearls Universe ? Anti-Choice Extremism: Cultural Denial and Political Consequences. Members of the Patriot Guard Riders showed up to protect funeral goers from protesters of Dr. 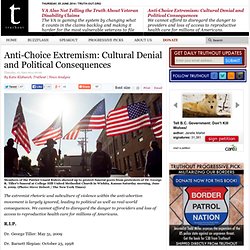 George R. Tiller's funeral at College HIll United Methodist Church in Wichita, Kansas Saturday morning, June 6, 2009. (Photo: Steve Hebert / The New York Times) The extremist rhetoric and subculture of violence within the anti-abortion movement is largely ignored, leading to political as well as real-world consequences. We cannot afford to disregard the danger to providers and loss of access to reproductive health care for millions of Americans. 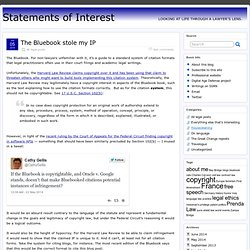 For non-lawyers unfamiliar with it, it’s a guide to a standard system of citation formats that legal practitioners often use in their court filings and academic legal writings. Unfortunately, the Harvard Law Review claims copyright over it and has been using that claim to threaten others who might want to build tools implementing this citation system. Theoretically, the Harvard Law Review may legitimately have a copyright interest in aspects of the Bluebook book, such as the text explaining how to use the citation formats correctly.

But as for the citation system, this should not be copyrightable. See 17 U.S.C. In no case does copyright protection for an original work of authorship extend to any idea, procedure, process, system, method of operation, concept, principle, or discovery, regardless of the form in which it is described, explained, illustrated, or embodied in such work. Inequality Begins at Birth: Child Poverty in America : News & Events. Barclays Fine Leads to New U.K. Scrutiny of Derivatives Conflict. Britain’s markets regulator plans to scrutinize the conflicts of interest banks face when they use derivatives after fining Barclays Plc (BARC) for manipulating the price of gold to avoid a pay-out to a client. 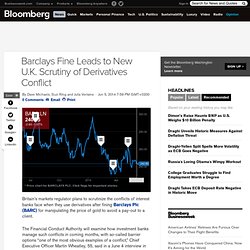 The Financial Conduct Authority will examine how investment banks manage such conflicts in coming months, with so-called barrier options “one of the most obvious examples of a conflict,” Chief Executive Officer Martin Wheatley, 55, said in a June 4 interview in New York. The FCA last month fined Barclays 26 million pounds ($44 million) after finding a former trader had suppressed the London gold fixing on June 28, 2012 to avoid paying out $3.9 million to a client who had taken out a barrier option with the London-based bank. Such contracts are a winner-takes-all bet on whether an asset will reach a certain price or not.

PolicyMic - It's not every day that you get to say Albert Einstein... Timeline Photos - People Against the NDAA. Global Activism is Taking Down the Toxic Food Industry. The foundation of the international food industry, monopolized by large corporations that hold zero regard for your health, is cracking. 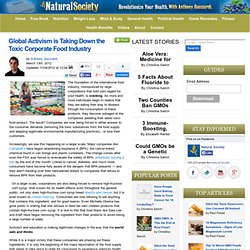 As more and more individuals begin to realize that they are eating their way to disease through the consumption of these products, they become outraged at the companies peddling their latest toxic food product. The result? Companies are now being forced to either answer to the consumer demands (removing the toxic substances from the food supply and adapting legitimate environmental manufacturing practices) , or lose their customers. Increasingly, we see this happening on a larger scale. Major companies like Campbell’s have begun abandoning bisphenol A (BPA), the cancer-linked chemical found in can linings and plastic containers.

On a larger scale, corporations are also being forced to remove high-fructose corn syrup. Military History Online. The drums of conspiracy and the fear of transparency. Dale Myers and Gus Russo are obsessed about conspiracy. 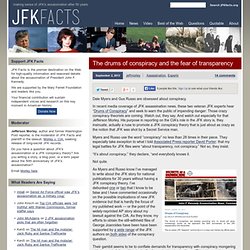 In recent media coverage of JFK assassination news, these two veteran JFK experts hear “Drums of Conspiracy” and seek to warn the public of impending danger: Those crazy conspiracy theorists are coming. Watch out, they say. And watch out especially for that Jefferson Morley. His purpose in reporting on the CIA’s role in the JFK story is, they insinuate, actually a ruse to promote a JFK conspiracy theory that is just about as crazy as the notion that JFK was shot by a Secret Service man. Myers and Russo use the word ”conspiracy” no less than 28 times in their piece. “It’s about conspiracy,” they declare, “and everybody knows it. Not quite. As Myers and Russo know I’ve managed to write about the JFK story for national publications for 30 years without having a JFK conspiracy theory.

Their gambit seems to be to conflate demands for transparency with conspiracy mongering with the goal of discrediting both.