A Day (And A Cheeseburger) With President Trump. What's getting cut in Trump's budget : dataisbeautiful. Pharmaceutical industry gets high on fat profits. Image copyright Thinkstock Imagine an industry that generates higher profit margins than any other and is no stranger to multi-billion dollar fines for malpractice. 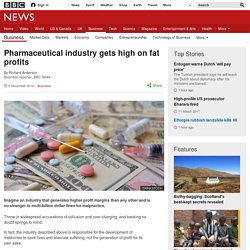 Throw in widespread accusations of collusion and over-charging, and banking no doubt springs to mind. In fact, the industry described above is responsible for the development of medicines to save lives and alleviate suffering, not the generation of profit for its own sake. Pharmaceutical companies have developed the vast majority of medicines known to humankind, but they have profited handsomely from doing so, and not always by legitimate means. Last year, US giant Pfizer, the world's largest drug company by pharmaceutical revenue, made an eye-watering 42% profit margin. What Bernie Sanders means by ‘democratic socialism.’ (You still have your choice of pajamas.) Sen. 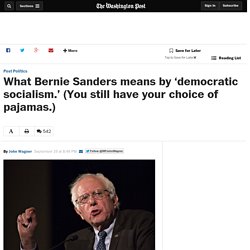 Bernie Sanders (I-vt.) (Photo by Daniel Acker/Bloomberg) GOFFSTOWN, N.H. -- The shorthand that the media uses to describe Sen. Bernie Sanders (I-Vt.) has changed. “It used to be that I was known as ‘the longest-serving independent in the history of the United States Congress,’ which is true,” Sanders said during an appearance Saturday at Saint Anselm’s College here. In response to a student’s question, Sanders, whose campaign for the Democratic nomination has surged in recent weeks, went on to give a lengthy of explanation of what “democratic socialism” is -- and is not. “So what does that mean?” Nestle Continues Stealing World's Water During Drought. Water coalition to hold press conference regarding 'shutdown' of Nestlé Plant The city of Sacramento is in the fourth year of a record drought - yet the Nestlé Corporation continues to bottle city water to sell back to the public at a big profit, local activists charge. 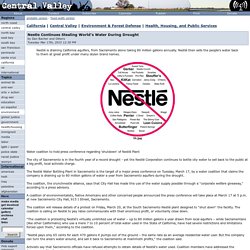 The Nestlé Water Bottling Plant in Sacramento is the target of a major press conference on Tuesday, March 17, by a water coalition that claims the company is draining up to 80 million gallons of water a year from Sacramento aquifers during the drought. The coalition, the crunchnestle alliance, says that City Hall has made this use of the water supply possible through a "corporate welfare giveaway," according to a press advisory. A coalition of environmentalists, Native Americans and other concerned people announced the press conference will take place at March 17 at 5 p.m. at new Sacramento City Hall, 915 I Street, Sacramento. The Delta smelt may already be extinct in the wild! 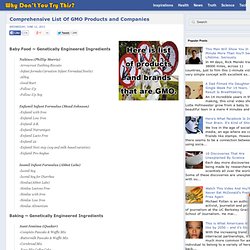 Triumph of the Drill: How Big Oil Clings to Billions in Government Giveaways. There Will Be Subsidies How the oil companies hit a gusher of tax breaks Writing Off Drilling Expenses: A century ago, drilling for oil was risky business. 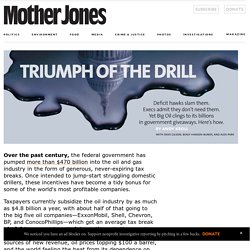 Start-up costs were high, and prospectors couldn't be sure they'd find crude. To encourage the nascent industry, in 1916 Congress approved the expensing of "intangible drilling costs"—pretty much any equipment used or work done—in the first year of a well's life. Today, prospectors rarely hit dry holes, but the century-old tax break remains a gusher.

The Depletion Allowance: When you sunk a well 90 years ago, you didn't know how much it would yield or for how long. Domestic Manufacturing Deduction: In 2004, ostensibly to prevent jobs from being shipped overseas, Congress extended a tax break for stateside manufacturers to cover the oil industry. Cash Flow Why Washington won't touch oil subsidies, Part One "It's a pretty damn good investment," says Sen. Why Socialism? Albert Einstein is the world-famous physicist. 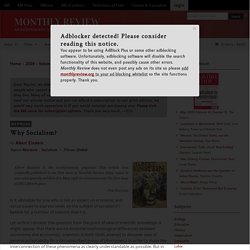 This article was originally published in the first issue of Monthly Review (May 1949). It was subsequently published in May 1998 to commemorate the first issue of MR‘s fiftieth year. —The Editors Is it advisable for one who is not an expert on economic and social issues to express views on the subject of socialism? I believe for a number of reasons that it is. Let us first consider the question from the point of view of scientific knowledge. Everglades To Be Killed This October by Florida's Own Koch Brothers. #154 of My Stupid State Most Floridians don't even know who they are. 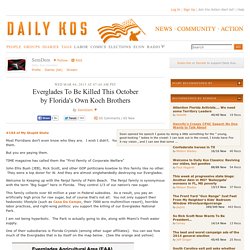 I wish I didn't. You probably haven't heard of them. But you are paying them. TIME magazine has called them the "First Family of Corporate Welfare" John Ellis Bush (JEB), Rick Scott, and other GOP politicians kowtow to this family like no other. Welcome to Keeping up with the Fanjul family of Palm Beach. This family collects over 60 million a year in Federal subsidies. I am not being hyperbolic. One of their subsidiaries is Florida Crystals (among other sugar affiliates). That huge lake is Lake Okeechobee, the 2nd largest freshwater lake in the Continental United States.