More politics-related stuff (other one is full)

On Finland, the United States, and the freedom of information and of the press. The Top 5 Forms of Socialism Denial Rampant In The West. Last week, I argued that denying the disastrous consequences of socialism is the Left’s equivalent of Holocaust denial. 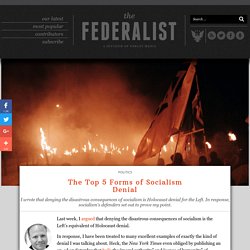 In response, I have been treated to many excellent examples of exactly the kind of denial I was talking about. Why Is the Mainstream Media Incapable of Reporting Honestly on Guns? Delta Paid for Its Own Security Upgrade and Fixed Everything. The security lines at the Atlanta airport had grown progressively worse. 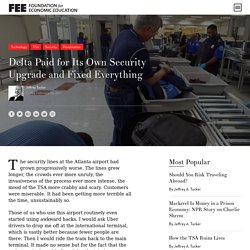 The lines grew longer, the crowds ever more unruly, the invasiveness of the process ever more intense, the mood of the TSA more crabby and scary. Customers were miserable. It had been getting more terrible all the time, unsustainably so. Those of us who use this airport routinely even started using awkward hacks. I would ask Uber drivers to drop me off at the international terminal, which is vastly better because fewer people are there. Romania's Politicians Have Literally Legalized Corruption. In 2016, there were three very worthy candidates for the highly coveted Politician of the Year Award. 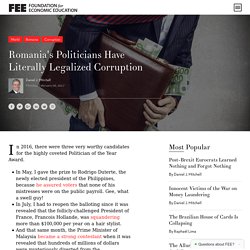 In May, I gave the prize to Rodrigo Duterte, the newly elected president of the Philippines, because he assured voters that none of his mistresses were on the public payroll. Gee, what a swell guy! The Drug War is the New Jim Crow. The Clintons’ War on Drugs: When Black Lives Didn’t Matter. A true paradox lies at the heart of the Clinton legacy. 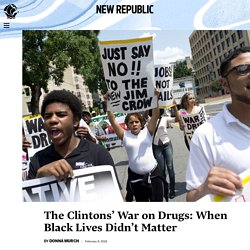 Both Hillary and Bill continue to enjoy enormous popularity among African Americans despite the devastating legacy of a presidency that resulted in the impoverishment and incarceration of hundreds of thousands of poor and working-class black people. Most shockingly, the total numbers of state and federal inmates grew more rapidly under Bill Clinton than under any other president, including the notorious Republican drug warriors Richard Nixon, Ronald Reagan, and George H. W. Bush. This fact alone should at least make one pause before granting unquestioning fealty to Hillary, but of course there are many others, including her entry into electoral politics through the 1964 Goldwater campaign, resolute support for the Violent Crime Control and Law Enforcement Act, race-baiting tactics in the 2008 election, and close ties to lobbyists for the private prison industry.

In American politics we so often live in an eternal present. Timeline: Black America’s surprising 40-year support for the Drug War. The first African American to hold the Attorney General post in the US, Eric Holder, initially opposed efforts to decriminalize marijuana and downscale drug war efforts. 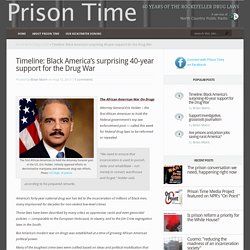 Photo: US Dept. of Justice The African American War On Drugs Attorney General Eric Holder – the first African American to hold the Federal government’s top law enforcement post — called this week for Federal drug laws to be reformed or repealed. “We need to ensure that incarceration is used to punish, deter and rehabilitate – not merely to convict, warehouse and forget,” Holder said, according to his prepared remarks.

America’s forty-year national drug war has led to the incarceration of millions of black men, many imprisoned for decades for non-violent low-level crimes Those laws have been described by many critics as oppressive, racist and even genocidal policies — comparable to the European Holocaust, to slavery, and to the Jim Crow segregation laws in the South. A Report on Urban Policy from DC’s Front Lines. A law-abiding resident has few options to protect herself, if she is luckless enough to live in the Nation’s Capital. 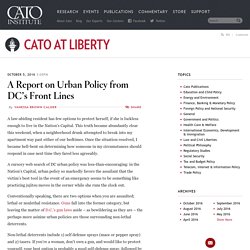 This truth became abundantly clear this weekend, when a neighborhood drunk attempted to break into my apartment way past either of our bedtimes. Once the situation resolved, I became hell-bent on determining how someone in my circumstances should respond in case next time they fared less agreeably. Yes, States Can Nullify Some Federal Laws, Not All. Rumblings from ardent states’ rights advocates grow louder in the wake of perceived federal overreach in such areas as health care, immigration reform, marijuana regulation and gun control. 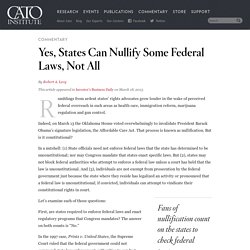 Indeed, on March 13 the Oklahoma House voted overwhelmingly to invalidate President Barack Obama’s signature legislation, the Affordable Care Act. That process is known as nullification. But is it constitutional? In a nutshell: (1) State officials need not enforce federal laws that the state has determined to be unconstitutional; nor may Congress mandate that states enact specific laws.

But (2), states may not block federal authorities who attempt to enforce a federal law unless a court has held that the law is unconstitutional. Yes, States Can Nullify Some Federal Laws, Not All. Lessons on Free Trade From the Great Depression. Read George W. Bush’s Speech at the Dallas Shooting Memorial Service. The Truth About Assault Weapons. Sultan Knish: The Trouble With Facebook. Despite the denials, the stories about Facebook’s bias are real. 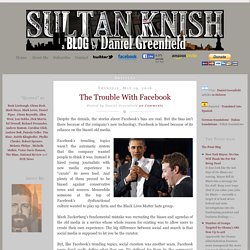 But the bias isn’t there because of the company’s new technology. Facebook is biased because of its reliance on the biased old media. Facebook’s trending topics wasn’t the automatic system that the company wanted people to think it was. Instead it hired young journalists with new media experience to “curate” its news feed. And plenty of them proved to be biased against conservative news and sources. The Danger of the “Black Lives Matter” Movement - Imprimis. Heather Mac DonaldManhattan Institute Heather Mac Donald is the Thomas W. 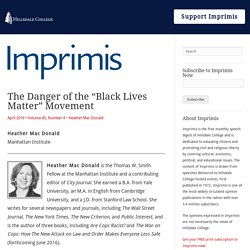 Smith Fellow at the Manhattan Institute and a contributing editor of City Journal. She earned a B.A. from Yale University, an M.A. in English from Cambridge University, and a J.D. from Stanford Law School. She writes for several newspapers and journals, including The Wall Street Journal, The New York Times, The New Criterion, and Public Interest, and is the author of three books, including Are Cops Racist? Worst Deal In History: $1.5 Trillion A Year To Reduce Global Warming By 0.048°C. Even if every nation in the world adheres to its climate change commitments by 2030 the only difference it will make to “global warming” by the end of this century will be to reduce the world’s temperatures by 0.048°C (0.086°F). 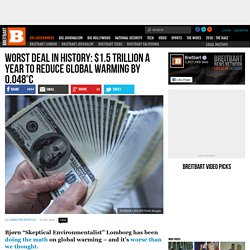 That’s 1/20th of a degree C. Let’s put this into perspective. Earlier this year, Climate Change Business Journal calculated that the annual cost of the global warming industry is $1.5 trillion. You Won't BELIEVE How High Chicago's Murder Rate Is. Chicago, IL continues its trend as one of America's deadliest cities, as the murder rate has skyrocketed this year. According to The New York Times, Chicago's murder rate has increased by 84 percent. The Rise of American Protectionism. The wedge issue of the 2016 primary campaign is the rising hostility to free trade—and, specifically, to the Trans-Pacific Partnership. On the Republican side, establishment candidates like Jeb Bush, Scott Walker, and Marco Rubio have failed or fallen behind, while Donald Trump maintains a commanding lead going into Florida and Ohio thanks, in large part, to his protectionist rhetoric.

Hope in Brazil as Millions March Against Rouseff. History was made this weekend in Brazil as protesters numbering in the millions took to the streets to protest for the removal of President Dilma Rousseff, who has been embroiled in a massive corruption scandal while Brazil’s economy has suffered from a devastating recession. As Retuers reported: The demonstrations were the latest in a wave of anti-government rallies that lost momentum late last year but have regained strength as a sweeping corruption investigation nears Rousseff's inner circle. From the Amazon jungle city of Manaus to the business hub of Sao Paulo and the capital Brasilia, protesters marched in a nationwide call for Rousseff to step down, raising pressure on lawmakers to back ongoing impeachment proceedings against her that just a few weeks ago appeared to be doomed.

Due to the work of Beltrao and Mises Brasil, Ludwig von Mises and Austrian economics have made unprecedented gains within the country. As Mises wrote in Theory and History, Read Justice Ginsburg’s moving tribute to her “best buddy” Justice Scalia. If you've ever believed that people can disagree passionately about politics and still respect and care for each other as friends, the friendship of Justice Antonin Scalia and Justice Ruth Bader Ginsburg was a comfort and an inspiration. He was the Supreme Court's most outspoken conservative; she is its most outspoken liberal.

But their friendship became famous, not just because of its odd-couple unexpectedness but because their mutual respect and affection for each other was obviously genuine. They and their families spent New Year's Eve together every year. Lee Smith on the Failings of U.N. Ambassador Samantha Power. Sociopath Alert: Barack Obama. That thing you’re feeling about Bowie — it isn’t grief. Obama and the Dictators: ‘We Caved’ On a late July day this past summer, a roar filled the sky over Cairo.

It was the sound of Barack Obama’s capitulation to a dictator. Eight new American fighter jets, freshly delivered from Washington, swooped low over the city, F-16s flying in formation. Neo-neocon » Blog Archive » Obama, knave. More evidence emerges that Obama knew what he was doing when he armed proto-ISIS groups in Syria, and did it anyway. Mobility & Globalization: Poverty Solution. The Murder of Eitam and Na’ama Henkin. Last night, Eitam Henkin, a doctoral student at Tel-Aviv University, where he won the prestigious Nathan Rotenstreich scholarship, and his wife Na’ama, an accomplished graphic designer who ran her own studio, were driving back from a class reunion to their home in Neria, a small community of 250 families in Samaria.

Neo-neocon » Blog Archive » More on the Pope and politics. Yesterday I wrote the following about Pope Francis and politics: …I tend to think that we often seem to get the popes that match our times. Ever notice some sort of harmonic resonance between popes and other public figures of the day? ……[T]here’s no way for a pope to retreat from politics, unless he is going to speak on ritual matters only and never venture into a single more general statement. A postmortem on the speakership of John Boehner. John Boehner has resigned. This comes with certain blessings and certain problems. FAIL: Scientist That Predicted Ice Caps Would Melt In 2013... Now Claims 2016? Global Warming: Why We Don't Need To Worry Even If It's Really True. Global Warming: More Evidence Emerges That It's A Con. A Grand Alliance against Terror. Who Is Steven Goddard? Gun Myths and the Roanoke Shootings. Mass Immigration, Not Trump – Conservatism’s Real Threat.

The Truth About Guns in Virginia. I Saw Hamas' Cruel and Selfish Game in Gaza - Opinion - Haaretz. Economic Fallacies: "Zero-Sum Game" - Kruse Kronicle. Peter Schiff: The Fantasy of a 91% Top Income Tax Rate. Problems with Obama's Case for His Iran Deal. The Politics of Delusion by Myron Magnet, City Journal Summer 2015. My Position on the Iran Deal. Why Sweden Isn't Venezuela. Why Women Do Not Belong in the U.S. Infantry. Five Middle East Blunders. Wisconsin 'John Doe' Investigations. Why Is Obama Abandoning 70 Years of U.S. Nonproliferation Policy? Article The Dangerous Unseriousness Of Rand Paul. Five Scandals for Hillary Clinton and Bernie Sanders that Would Sink any Republican.

The Boston Marathon Bombers Were Clear About Their Motives. So, Why Is Masha Gessen Confused? Book claims foreign cash made Bill and Hillary filthy rich. Nationalreview. Free speech is so last century. Today’s students want the ‘right to be comfortable’ Andrew Klavan: Just Say No To Feminism. Wake Up, Europe by George Soros. The Secret Casualties of Iraq’s Abandoned Chemical Weapons. Plants Absorb Much More Carbon Than Previously Thought. Why conservatives need to abandon the label of feminism. Are Republicans the New Heroes on Prison Reform? Who’s to Blame for a World in Flames? Pedophilia: A Disorder, Not a Crime. What Americans Won’t Learn About Health Care. The Christian Element in the Hong Kong Protests. 5 lies that have shaped the Obama presidency. 5 Feminist Myths That Will Not Die. Neo-neocon » Blog Archive » Edna St. Vincent Millay, political changer.