Eight (harsh) Truths That Will Improve Your Life... 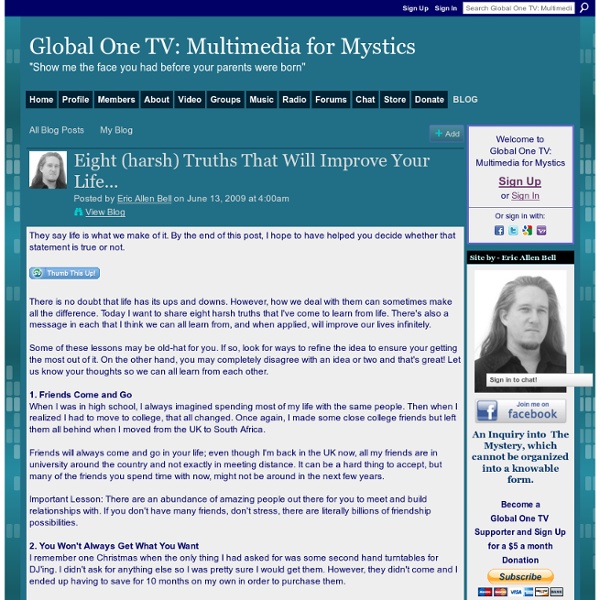 They say life is what we make of it. By the end of this post, I hope to have helped you decide whether that statement is true or not. There is no doubt that life has its ups and downs. However, how we deal with them can sometimes make all the difference. Today I want to share eight harsh truths that I've come to learn from life. There's also a message in each that I think we can all learn from, and when applied, will improve our lives infinitely. Some of these lessons may be old-hat for you. 1. Friends will always come and go in your life; even though I'm back in the UK now, all my friends are in university around the country and not exactly in meeting distance. Important Lesson: There are an abundance of amazing people out there for you to meet and build relationships with. You won't always get what you want in life: people are going to be late, people will let you down, items you want won't always be available. 4. 5. As the saying goes - "Only those who are asleep make no mistakes". 6.

42 Practical Ways To Improve Yourself Are you someone who likes to grow? Do you constantly seek to improve yourself and become better? If you do, then we have something in common. SEE ALSO: How to Better Yourself One Day at a Time After 1.5 years of actively pursuing growth and helping others to grow through my personal development blog, I realize there is never an end to the journey of self improvement. As a passionate advocate of growth, I’m continuously looking for ways to self-improve. Read a book every day. I’d love to hear your thoughts on this article or anything about personal growth. Image © kevindooley Blood Sugar Monitoring Nano Ink Tattoo Biomedical researchers at Draper Laboratories are working on a blood glucose monitoring nano ink tattoo that will allow diabetics to say goodbye to the daily routine of painful needles. This cool tattoo allows you to manage diabetes and look tough at the same time. This new technology would require the apply of a one time small tattoo on the arm. The tattoo contains a glucose detecting ink that changes color based upon the blood glucose levels. The nano ink particles are tiny, squishy spheres about 120 nanometers across. My only question is do you have to get a heart tattoo or can you get a custom tattoo design like a dragon tattoo or a skull tattoo? [Via]

How To Treat Others: 5 Lessons From an Unknown Author Five Lessons About How To Treat People -- Author Unknown 1. First Important Lesson - "Know The Cleaning Lady" During my second month of college, our professor gave us a pop quiz. Surely this was some kind of joke. "Absolutely," said the professor. I've never forgotten that lesson. 2. One night, at 11:30 p.m., an older African American woman was standing on the side of an Alabama highway trying to endure a lashing rainstorm. A young white man stopped to help her, generally unheard of in those conflict-filled 1960s. She seemed to be in a big hurry, but wrote down his address and thanked him. A special note was attached. Sincerely, Mrs. 3. In the days when an ice cream sundae cost much less, a 10 year-old boy entered a hotel coffee shop and sat at a table. The little boy pulled his hand out of his pocket and studied the coins in it. "Well, how much is a plain dish of ice cream?" The little boy again counted his coins. 4. In ancient times, a King had a boulder placed on a roadway. 5.

How to Be Alone I once knew a man who hated to be alone. It panicked him to the point where he sought to fill all of his waking hours with people. On the streets, at the bus stop, in restaurants, if he was unaccompanied he would soon find someone to talk to. Anyway, I digress. I recently found a little gem of a video on YouTube called How to Be Alone by filmaker Andrea Dorfman and poet/singer/songwriter Tanya Davis. I have to say, however, after extolling the virtues of solitude, that I’ve never HAD to be alone much in my life and the few I times I did (like when I changed schools in grade 12 and had no friends for three months) seemed cruel. From the balcony of my old office building, I used to look out at the apartment next door and see a little old lady eating breakfast, lunch and dinner by herself, sometimes nodding off alone at her table. I think the truest thing I have ever read about being alone was written by French writer Colette. Recent Kerry Slavens Articles:

Mom survives 5-year battle with flesh-eating germ - Health - Infectious diseases BALTIMORE — Waking from a fog of anesthesia, Sandy Wilson found she was a patient in one of the hospitals where she worked as a nurse. She remembered having a baby, and being told she had gotten an infection. But nothing could prepare her for what lurked beneath the sheets. Flesh-eating bacteria were eating her alive. "When I looked down at my belly, basically all the skin was gone and I could see my internal organs," she said. "I remember seeing my intestines. In all of medicine, few infections are as feared as this one. It used to be caused almost exclusively by one type of strep bacteria. "In the first 20 years I practiced, I may have seen one case," said Dr. To treat it, doctors cut away dead tissue, but the infection often advances after they think they've gotten it all. Eaten alive Inch by inch, it devoured the 34-year-old Wilson. Over five years, she had countless surgeries, including an unusual organ transplant. "It was like I was rotting from the inside out. Dr.

How To Train Yourself To Be In The Mood You Want Dec 27, 2010 When you have major changes going on in your life, or you’re just frustrated about where you are, it’s easy to get trapped in a cycle of depression, bad moods and frustration. I know, I’ve been there … and when I’m not careful, I still get there more than I want to. But when I’ve had a particularly hard time, I hit these moments where I’m in a foul mood, or I’m just feeling paralyzed, and I’m just stuck. Sometimes I just stew in that and stay there, but sometimes I actually get intelligent and pull my way out of it. I’m going to outline the framework that I’ve been using successfully to really get myself resourceful and motivated (and in a better mood) when I’m feeling stuck. First Up: Using A Framework to Escape From Paralyzing Emotions When we feel bad, it’s hard to “feel good” again. The reason for this is that steps take the emotion out of our situation and give us direction to simply act. A: AGREE With Yourself That You Don’t Want To Be In This Mood Right Now. Dave

Handbook for Life: 52 Tips for Happiness and Productivity | zen habits By Leo Babauta This is something I’ve been wanting to write for some time — a Handbook for Life. Now, is there any handbook that can be a guide to every single person? Of course not. This is just a list of tips that I think will help many people in life — some of them common-sense tips that we often forget about. Consider this guide a reminder. It’ll also become apparent from the links in this handbook that I’ve written about this stuff before. How to use this handbook This handbook is not meant to be a step-by-step guide, nor should you adopt all the tips below. Pick and choose the tips that will be most useful to you. 52 Tips for Happiness and Productivity Try rising early.

Astronomers Use Radio Signals for New Way to Weigh Planets | Universe Today Want to stay on top of all the space news? Follow @universetoday on Twitter The Sun, Earth and Jupiter orbit a common barycentre. credit – D. Champion, MPIfR Finding the mass of other planets is tricky, and usually is done by measuring the orbits of their moons or of spacecraft flying past them. Champion says measuring the masses of planets in this new way could feed into data needed for future space missions. The new method is based on corrections astronomers make to signals from pulsars, small spinning stars that deliver regular ‘blips’ of radio waves. The Earth is traveling around the Sun, and this movement affects exactly when pulsar signals arrive here. “For instance, if the mass of Jupiter and its moons is wrong, we see a pattern of timing errors that repeats over 12 years, the time Jupiter takes to orbit the Sun,” said Dr. Data from a set of four pulsars have been used to weigh Mercury, Venus, Mars, Jupiter and Saturn with their moons and rings.

Emotions Are A Resource, Not A Crutch Ever since Darwin, and perhaps long before him, it has been theorized that our emotions play a crucial role in adapting to our environment. This means that emotions are not just an inconvenient byproduct of consciousness, but a form of higher cognition – an ability for living beings to experience their world in deeper and more complex ways. Humans are a species that thrive on social relations, and our emotions become a gauge on morality and justice. They help facilitate our interactions by giving us clues on how to connect with others in meaningful and productive ways. Emotions however come in many different qualities, degrees, and intensities. Perhaps more important than how researchers conceptualize different emotions is how we experience them. The first key to emotional intelligence is being able to identify these emotions while they occur. Of course even after we are aware of our emotions it doesn’t mean they can’t mislead us to undesirable actions. Sources [2] McNAIR, D.