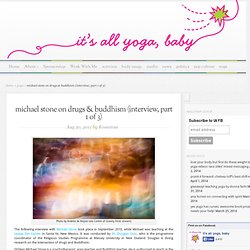 It was conducted by Dr. Douglas Osto, who is the programme coordinator of the Religious Studies Programme at Massey University in New Zealand. Douglas is doing research on the intersection of drugs and Buddhism. Shôken Michael Stone is a psychotherapist, yoga teacher and Buddhist teacher. Suzuki Roshi Dharma Talks. Suzuki-roshi in the Buddha-hall at City Center for a service or lecture Shunryū Suzuki-rōshi Tassajara. 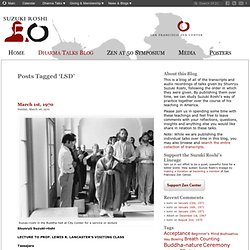 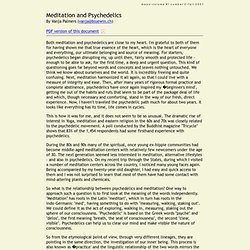 The Psychedelic Experience: LSD and Buddhist Practices – InfoRefuge.com. “Tricycle” magazine described the boom of LSD during the 1960s as blowing the generation gap wide open. 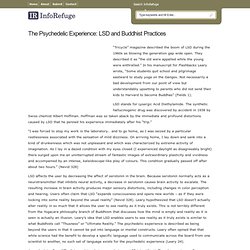 They described it as “the old were appalled while the young were enthralled.” In his manuscript for Flashbacks Leary wrote, “Some students quit school and pilgrimage eastward to study yoga on the Ganges. Not necessarily a bad development from our point of view but understandably upsetting to parents who did not send their kids to Harvard to become Buddhas” (Fields 1). LSD stands for Lysergic Acid Diethylamide. The synthetic hallucinogenic drug was discovered by accident in 1938 by Swiss chemist Albert Hoffman. “I was forced to stop my work in the laboratory… and to go home, as I was seized by a particular restlessness associated with the sensation of mild dizziness. 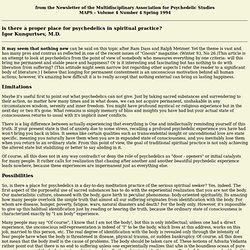 Igor Kungurtsev, M.D. It may seem that nothing new can be said on this topic after Ram Dass and Ralph Metzner. Yet the theme is vast and has many pros and contras as reflected in one of the recent issues of "Gnosis" magazine. (Winter 93, No 26.)This article is an attempt to look at psychedelics from the point of view of somebody who measures everything by one criteria: will this bring me permanent and stable peace and happiness? High History of Buddhism. Tricycle: The Buddhist Review Fall 1996. 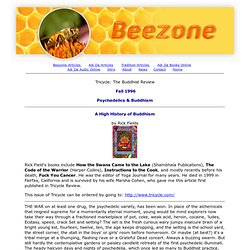 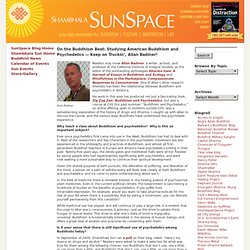 Drugs and Dharma in the 21st Century. In June, please join us at CIIS online in a course entitled, "Buddhism and Psychedelics. 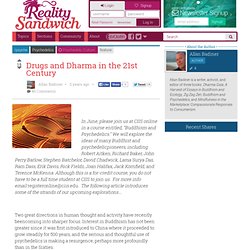 " We will explore the ideas of many Buddhist and psychedelicpioneers, including Robert Aitken, Richard Baker, John Perry Barlow, Stephen Batchelor, David Chadwick, Lama Surya Das, Ram Dass, Erik Davis, Rick Fields, Joan Halifax, Jack Kornfield, and Terence McKenna. Although this is a for-credit course, you do not have to be a full time student at CIIS to join us. For more info email registeronline@ciis.edu. The following article introduces some of the strands of our upcoming explorations... Are psychedelics useful in the practice of Buddhism? Terence McKenna - Meditation and Psychedelics.avi. ZIG ZAG ZEN. Library : The Erowid Review » Zig Zag Zen: Buddhism and Psychedelics. Psychoactivism. In the early '70s at a meeting of students at the Western world's first Buddhist monastery, Tassajara Zen Mountain Center, the agenda had been covered and there we all were sitting around the dining room, enjoying the energy of being together talking, and not wanting to go back to our cabins and to bed. 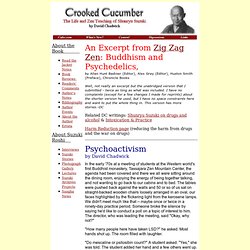 The tables were pushed back against the walls and 50 or so of us sat on straight-backed wooden chairs loosely arranged in an oval, our faces highlighted by the flickering light from the kerosene lamps. We didn't meet much like that -- maybe once or twice in a ninety-day practice period. Someone broke the silence by saying he'd like to conduct a poll on a topic of interest to him.

The Paisley Gate, by Erik Davis.