Artificial photosynthesis breakthrough could turn CO2 into plastics on the cheap. Pilot plant demonstrates low-cost conversion of CO2 into fuel. Tweaked titanium turns C02 into solar fuel. An ability to convert carbon dioxide into energy using only the power of the sun, as plants do through photosynthesis, would be a monumental breakthrough in green energy research. 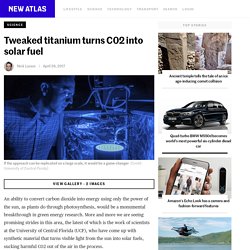 More and more we are seeing promising strides in this area, the latest of which is the work of scientists at the University of Central Florida (UCF), who have come up with synthetic material that turns visible light from the sun into solar fuels, sucking harmful C02 out of the air in the process. The prospect of artificial photosynthesis is a hugely exciting one, and it has inspired scientists to pursue this potential environmental panacea from all angles. We have seen a number of artificial leaves that seek to recreate the energy-harvesting abilities of the real thing, along with more outside-the-box approaches such as hybrid energy systems and photoelectrochemical cells inspired by moth eyes. But still the goal remains out of reach. Solar-powered molecule converts CO2 into carbon-neutral fuel source.

The humble leaf, which collects sunlight and uses that energy to turn carbon dioxide into fuel for the plant, has inspired scientists to create various systems that could turn the greenhouse gas into fuels, using bacteria, engineered microorganisms, chemical reactors or a catalyst of copper and carbon. 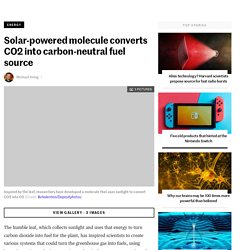 Now, researchers at Indiana University (IU) have developed a molecule that uses sunlight to convert the problematic carbon dioxide into carbon monoxide, which can then be stored as a fuel source. While it's not a widely-used fuel by itself, carbon monoxide has other industrial tricks up its sleeve, and can be used to create other fuels. Crystals of CO2 drawn from the air. When we hear about carbon capture technology, it typically takes the form of sponge-like materials that are used to trap excess carbon dioxide at the places it is released, such as industrial smoke stacks. 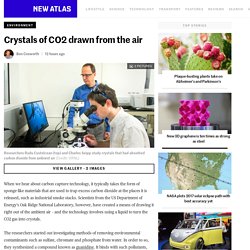 Scientists from the US Department of Energy's Oak Ridge National Laboratory, however, have created a means of drawing it right out of the ambient air – and the technology involves using a liquid to turn the CO2 gas into crystals. The researchers started out investigating methods of removing environmental contaminants such as sulfate, chromate and phosphate from water. In order to so, they synthesized a compound known as guanidine. It binds with such pollutants, forming insoluble crystals that can subsequently be removed from the water. However, they also discovered that when an aqueous solution of guanidine was left open to the air, it drew CO2 from that air and converted it into prism-like carbonate crystals. Reversing the combustion process to convert CO2 into ethanol. The danger of the ever-increasing levels of carbon dioxide (CO2) in Earth's atmosphere has become one of the most pressing issues of our age. 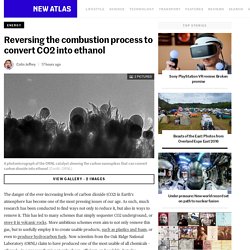 As such, much research has been conducted to find ways not only to reduce it, but also in ways to remove it. This has led to many schemes that simply sequester CO2 underground, or store it in volcanic rocks. More ambitious schemes even aim to not only remove this gas, but to usefully employ it to create usable products, such as plastics and foam, or even to produce hydrocarbon fuels. Now scientists from the Oak Ridge National Laboratory (ORNL) claim to have produced one of the most usable of all chemicals – ethanol – in a process that is not only cheap, efficient, and scalable, but also conducted at room temperature. Liquid hydrocarbon fuel created from CO2 and water in breakthrough one-step process. As scientists look for ways to help remove excess carbon dioxide from the atmosphere, a number of experiments have focused on employing this gas to create usable fuels. 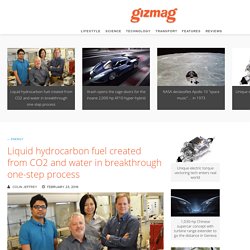 Both hydrogen and methanol have resulted from such experiments, but the processes often involve a range of intricate steps and a variety of methods. Hybrid artificial photosynthesis technique produces hydrogen and methane. Not content with using hybrid artificial photosynthesis to turn CO2 emissions into plastics and biofuel, researchers at the Lawrence Berkeley National Laboratory (Berkeley Lab) now claim to have produced an enhanced system that uses water and solar energy to generate hydrogen, which is in turn used to produce methane, the main element of natural gas, from carbon dioxide. 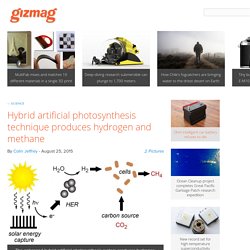 Generating such gases from a renewable resource may one day help bolster, or even replace, fossil fuel resources extracted from dwindling sub-surface deposits. Simply put, the process of photosynthesis turns light energy into chemical energy. Sucking CO2 out of the atmosphere to create carbon nanofibers. Carbon nanofibers hold tremendous potential. 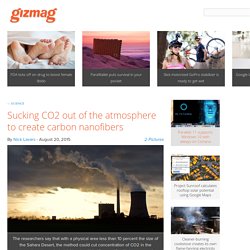 They may one day be put to use in tougher bulletproof vests, artificial muscles or rebuilding damaged hearts, just to name a few possibilities. But could the greatest gift these little wonders offer humanity be not what they bring into the world but what they take out of it? Scientists have developed a technique that could pull the mounting carbon dioxide in our atmosphere and transform it into carbon nanofibers, resulting in raw materials for use in anything from sports gear to commercial airliners.

Audi just created diesel fuel from air and water. Audi is making a new fuel for internal combustion engines that has the potential to make a big dent when it comes to climate change – that's because the synthetic diesel is made from just water and carbon dioxide. 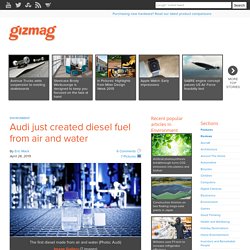 View all The company's pilot plant, which is operated by German startup Sunfire in Dresden, produced its first batches of the "e-diesel" this month. German Federal Minister of Education and Research Johanna Wanka put a few liters of the fuel in her work car, an Audi A8, to commemorate the accomplishment. The base fuel is referred to as "blue crude," and begins by taking electricity from renewable sources like wind, solar or hydropower and using it to produce hydrogen from water via reversible electrolysis. The hydrogen is then mixed with CO2 that has been converted into CO in two chemical processes and the resulting reactions produce a liquid made from long-chain hydrocarbons – this is blue crude, which is then refined to create the end product, the synthetic e-diesel. 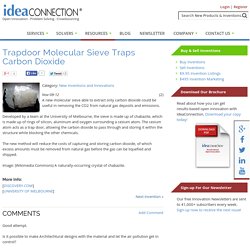 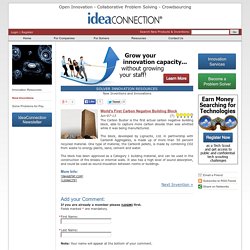 The block, developed by Lignacite, Ltd. in partnership with Carbon8 Aggregates, is made up of more than 50 percent recycled material. One type of material, the Carbon8 pellets, is made by combining CO2 from waste to energy plants, sand, cement and water. The block has been approved as a Category 1 building material, and can be used in the construction of fire breaks or internal walls. Creating Electricity from Carbon Dioxide. Creating Electricity from Carbon Dioxide (16)Jul-25-13 A team of researchers has found a way to create electricity from carbon dioxide while also preventing the gas from entering the atmosphere. The technique, developed by the team from Wetsus, involves a system of membrane and water.

Scrubbing CO2 with Bird Lungs. Scrubbing CO2 with Bird Lungs (6)Sep-10-13 A new CO2 scrubbing filter inspired by bird lungs could be applied to both power plants and automobiles. Created by Aaron Esser-Kahn and team of the University of California, the scrubber is based on the tiny tubes inside the lungs of birds, called parabronchii. The tubes, with their large surface area, are very efficient at filtering oxygen from the air—a necessary adaptation since birds fly often fly at altitudes where there is very little oxygen. Using the lungs as a model, the research team designed filters made of different-sized tubes, with larger tubes for waste-emissions and smaller ones filled with a liquid that will absorb CO2. Algae Lamp Absorbs CO2 as it Glows. Algae Lamp Absorbs CO2 as it Glows (12)Oct-10-13 A new, sustainable lamp design uses algae to illuminate a room while consuming carbon dioxide, potentially scrubbing as much as a ton carbon from the air in one year.

Created by French biochemist Pierre Calleja and his team at Fermentalg, the tube-shaped lamps are filled with algae, which can grow well inside the structure and use photosynthesis to emit a green glow. The lamps can also store the energy created during photosynthesis for later use, such as at night or in low-light settings. According to the developers, a single light could absorb about a ton of carbon from the air in one year—equal to the amount that can be removed by 150 to 200 trees. More Info: Add Comment Comments very good Posted by eid slime on October 11, 2013 Great idea. Add your Comment: Creating Fuel from Seawater. Creating Fuel from Seawater (2)Apr-09-14 A newly developed method of creating fuel from seawater could allow Navy ships and planes to refuel at sea, without the need for fuel-bearing tankers.

The process involves a newly developed method of extracting carbon dioxide and hydrogen gas from seawater simultaneously, and then using a catalytic converter to turn the gasses into a fuel via a gas-to-liquids process. The research team is now investigating ways to produce the fuel in industrial quantities. According to Vice Admiral Philip Collom, the alternative fuel is a game-changing technology, and can be used in the same engines already installed in today's ships and planes. Image: Jacob Estes More Info: Add Comment Comments Very clever! This seems like an extremely improbable event. CO2 Sponge Could Ease Transition to Hydrogen Fuels. CO2 Sponge Could Ease Transition to Hydrogen Fuels (3)Aug-14-14 A new polymer able to absorb CO2 could help reduce carbon emissions while also making hydrogen power options more feasible. Converting Water into Fuel. New way to capture and seperate carbon dioxide from flue-gas.