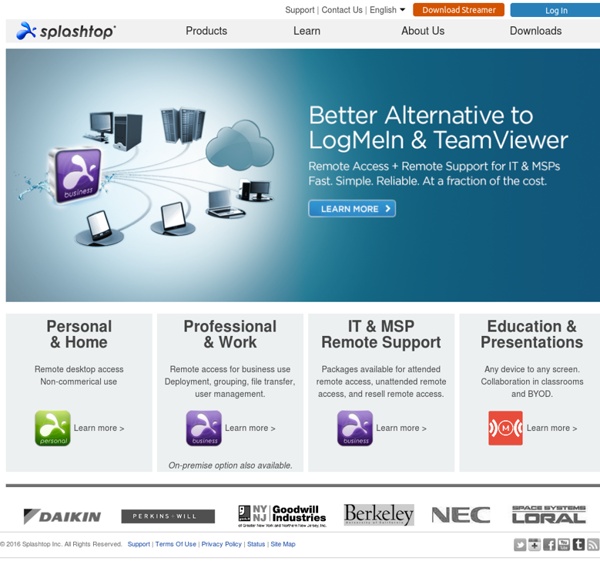 The history of supercomputers - Slideshow Have you ever wondered why a supercomputer is called a supercomputer? Is it the number of processors or the amount of RAM? Must a supercomputer occupy a certain amount of space, or consume a specific amount of power? The first supercomputer, the Control Data Corporation (CDC) 6600, only had a single CPU. Released in 1964, the CDC 6600 was actually fairly small — about the size of four filing cabinets. 39 Sites For Using iPads in the Classroom Pages - Menu This Blog Linked From Here

Teaching With and About Technology Jim Wilson/The New York TimesStudents have always faced distractions and time-wasters. But computers and cellphones, and the constant stream of stimuli they offer, pose a profound new challenge to focusing and learning.Go to related article » Updated | Feb. 2013

When computers were sexy: Hilarious vintage ads from the early days of the PC By Daily Mail Reporter Published: 05:19 GMT, 1 April 2012 | Updated: 06:31 GMT, 1 April 2012 Companies such as Apple have made their name by marketing their products not just as technological tools but as glamorous and fun toys. What is the Gyre - Gyre Clean Up Project Gyre Facts • A Gyre is a naturally occurring vortex of wind and currents that rotate in a clockwise direction in the northern hemisphere and counter-clockwise in the southern hemisphere. These create a whirlpool effect, whose vortex moves more slowly at the center and that is where marine plastic debris collects.

Must-have Tools for Developers on Windows: Part 2 We Recommend These Resources Every technologist has his favourite list of developer tools, applications and OS which they believe are indispensible and without them they would not be able to develop anything. With time and changing focus, this list keeps changing. Want to Build a New App? There's an App for That, Too Competition in Apple’s App Store is so tough that even strong concepts must be planned to perfection before any development should start. So enter App Cooker: A hot new iPad app that makes sure other apps have the right ingredients in place before any development begins. App Cooker ($19.99) from Sophia-Antipolis, France-based Hot Apps Factory helps aspiring designers organize, plan and get app projects ready for production. 30-year-old Xavier Veyrat — the designer of App Cooker — spoke to Mashable about the development of the platform and the steps that go into creating a masterpiece app recipe. Have you always been into design?

Recycling Symbols on Plastics - What Do Recycling Codes on Plastics Mean Sometimes it seems like modern America is one colossal plastic palace. The versatile material is in our cars, toys, packaging, clothing, home goods, food utensils, medical devices and so much more. It is also littering our streets, clogging our waterways and choking marine life. Simple Is Beautiful If you’ve read some of my other articles, you know that I believe that the best code is no code at all. But what if you actually have to write some code? What then? This article deals with that question and shows the importance of simplicity. As I write this there are still a few cardboard boxes strewn across our home as we finish unpacking everything. My wife and I just finished a surprisingly painless cross-country move to sunny San Diego.

Marketplace of Ideas The Garrison Institute's Initiative on Contemplation and Education, in collaboration with the Kirlin Charitable Foundation, recently convened the leadership forum Mindful Parenting: Conceptualization and Measurement. This event brought together researchers, clinicians and others interested in and working with family intervention programs. The aim of the meeting was to address measurement issues around the topics of mindful parenting and reflective functioning in parenting, in order to develop effective measurement systems for use in research. During the three days of the meetings, the group spent the majority of their time together in group discussion, sharing one another's work involved, raising pertinent issues to be addressed during future clinical trials and research, and considering the questions, "What is mindful parenting? And what indicators of mindful parenting are evident in parenting behavior?"

Writing Effective Documentation For WordPress End Users Advertisement Today I get to write about something close to my heart: documentation. The emails I love the most start with, “I’ve got this new product. Please, document it!” I get a lot of pleasure from learning about someone’s code and making it as clear as possible for users. I love taking a great product and making sure that people get it.