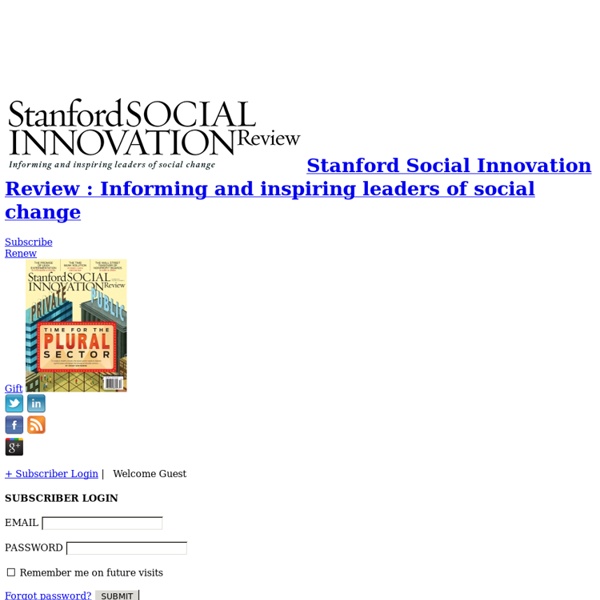 Design Thinking for social innovation, the “third way” to empower the Third World The issue of the Stanford Social Innovation Review was on a corner of my desk for a while, but I finally managed to find the time to read this article which makes the cover-story of Stanford’s journal : Design Thinking for Social Innovation, by Tim Brown and Jocelyn Wyatt. Both are executives at IDEO, a global Design design firm which has worked with notorious companies like Kaiser Permanente or Shimano (see this previous blog post). In this article, the authors highlight the social scope of Design Thinking, explaining in what way it can help very poor people to improve their lives. Intermission: Watch Kiva Loans Travel the World - Business We've written a lot about Kiva, the pioneering nonprofit that makes it easy for individuals to give small loans to entrepreneurs in developing countries. And despite numerous debates over the overall effectiveness of microlending, there's no doubt that it makes a difference in many individual lives. Thanks to this captivating animated map produced by Kiva's staff (via FlowingData), we can actually see what that difference-making looks like. The map represents every one of the 620,000-plus Kiva loans with a colored dot that flies from the lender's location to the borrower's, then back to the lender as the loan is repaid. The activity starts small, with seven loans moving from the United States to East Africa in April 2005.

The personal blog of Futurist Thomas Frey » Blog Archive » The Rise of the Cause-Architect The Rise of the Cause-Architect In 1862, Abraham Lincoln signed into law the famous Emancipation Proclamation, a piece of legislation that gave freedom to all of the slaves. But true freedom was still a century away for those who lived in the black vs. white world leading up to the Civil Rights movement, an effort that began in earnest in the 1950s. The movement for freeing the slaves was a social cause that tore the country apart, resulting in a civil war and a century’s worth of social scarring that needed to heal before the effort could begin again. In 1954 the stage was set with a Supreme Court ruling that made segregation illegal.

The Global Innovation Machine: How P&G, GE, Google, IBM, Sony, 3M, Toyota Run Their Global Innovation Management » The Innovation Machine Which are the most innovative companies in the world? The Innovation Survey by Boston Consulting Group attempts to provide an answer. Ten companies are named the leading innovators: Apple, Google, Toyota, GE, Microsoft, Procter & Gamble, 3M, Walt Disney, IBM and Sony. What can we learn from these innovation leaders in respect of their global innovation management? Procter & Gamble has a real global presence. It exploits the advantages of its global presence to the fullest extent.

Design management Design management is the business side of design. Design managers need to speak the language of the business and the language of design. Traditionally, design management was seen as limited to the management of design projects, but over time, it evolved to include other aspects of an organisation at the functional and strategic level. A more recent debate concerns the integration of design thinking into strategic management as a cross-disciplinary and human-centred approach to management. This paradigm also focuses on a collaborative and iterative style of work and an abductive mode of inference, compared to practices associated with the more traditional management paradigm.[2] Over recent years, design has become a strategic asset in brand equity, differentiation, and product quality for many companies.

Waking Up Full of Awesome There was a time when you were five years old, and you woke up full of awesome. You knew you were awesome. You loved yourself. How to Approach Open Innovation: The 15inno Open Innovation Roadmap As we can define open innovation in many ways, there are also many different approaches to open innovation. How do you get started? OVO Innovation has developed a topology that builds on two defining attributes. It is a good inspirational starter.

INNOVATION ON THE EDGES One of the things that we haven't done very well is we've been looking at science and technology as trying to make things more efficient, more effective on a local scale, without looking at the system around it. We were looking at objects rather than the system, or looking at the nodes rather than the network. When we talk about big data, when we talk about networks, we understand this. I'm an Internet guy, and I divide the world into my life before the Internet and after the Internet.

Consumer Innovation as New Economic Pattern When he was finished, Mr. Reetz, now 29 and working at Disney Research’s laboratories, put his 79-step how-to guide on a Web site. Since the post went up nearly two years ago, about 1,000 people have joined Mr. Reetz’s forum, and about 50 have built their own scanners from castoff furniture, aircraft aluminum, whiskey boxes and plastic foam. Do-it-yourselfers like Mr. Why are you starting something? Alex Bainbridge, writing for Tnooz, in Why travel startups always seem to suffer from the same problems wonders why so many entrepreneurs fail in such similar ways. Bainbridge argues that the root cause of their failure goes to starting companies for the wrong reasons. He posits that there are five reasons people start something: InnovationDisruptionEnjoymentProfitThe friggin sucks — fix it The last reason is the only valid reason for starting a company, the rest are frivolous.