CIL's by State, Territory, Country, International. State Independent Living Council. Home Idaho SILC Vision The Idaho State Independent Living Council aspires to promote a philosophy of independent living, including a philosophy of consumer control, peer-support, self-help, self-determination, equal access, and individual and system advocacy in order to maximize opportunities for individuals with disabilities, and the integration and full inclusion of individuals with disabilities into the mainstream of society. 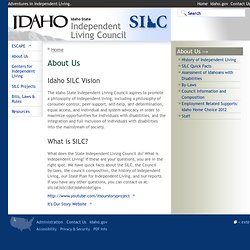 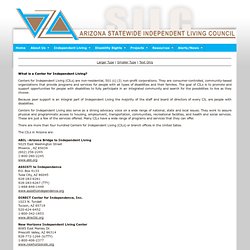 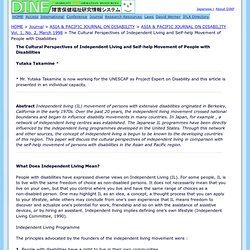 Yutaka Takamine is now working for the UNESCAP as Project Expert on Disability and this article is presented in an individual capacity. Abstract Independent living (IL) movement of persons with extensive disabilities originated in Berkeley, California in the early 1970s. Over the past 20 years, the independent living movement crossed national boundaries and began to influence disability movements in many countries. Independent Living Institute. Missouri Statewide Independent Living Council. Kansas Association of Centers for Independant Living. Centers for Independent Living. Program Office: Rehabilitation Services Administration CFDA Number: 84.132AProgram Type: Discretionary/Competitive Grants Also Known As: CILs This program provides support for the planning, conduct, administration, and evaluation of centers for independent living that comply with the standards and assurances in Sec. 725 of the Rehabilitation Act , consistent with state plans for establishing statewide networks of centers. 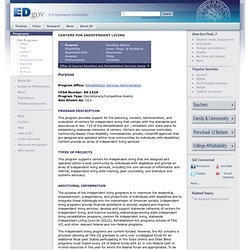 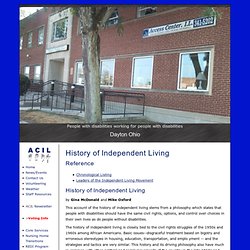 The history of independent living is closely tied to the civil rights struggles of the 1950s and 1960s among African Americans. Basic issues--disgraceful treatment based on bigotry and erroneous stereotypes in housing, education, transportation, and emplo yment -- and the strategies and tactics are very similar. The first social movement was deinstitutionalization, an attempt to move people, primarily those with developmental disabilities, out of institutions and back into their home communities. The next movement to influence disability rights was the civil rights movement. Demedicalization was a movement that began to look at more holistic approaches to health care. References. Youth Taking Charge of Their Own Transition: The Role of CILs presented by Margaretha Vreeburg Izzo Ph.D., on April 20, 2011. 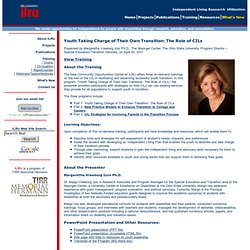 In this program, "Youth Taking Charge of Their Own Transition: The Role of CILs," the presenter provides participants with strategies on how CILs can use existing services they provide for all populations to support youth in transition. It's Our Story.