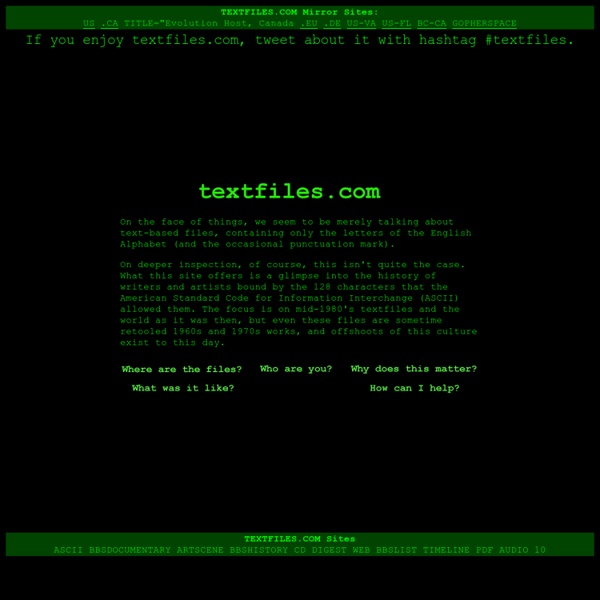 On the face of things, we seem to be merely talking about text-based files, containing only the letters of the English Alphabet (and the occasional punctuation mark). On deeper inspection, of course, this isn't quite the case. What this site offers is a glimpse into the history of writers and artists bound by the 128 characters that the American Standard Code for Information Interchange (ASCII) allowed them. The focus is on mid-1980's textfiles and the world as it was then, but even these files are sometime retooled 1960s and 1970s works, and offshoots of this culture exist to this day.

Free ebooks On August 26 2020, the Project Gutenberg website underwent some major changes. These changes had been previewed since early 2020, and visitors to the old site were invited to try the new site, including giving input via a brief survey. The old site is no longer available. If you found yourself on this page unexpectedly, it is because an old page was redirected here. Please use the navigation menus at the top of the page to find what you were looking for. All of the functionality, and most of the content, from the old site is still here - but in a different location.

iPad Simulator Please How would you rate us? CrapAwesome If you are having issues on "slide to login", double click the slider button Please show your support for our hosting fee by clicking on some ads. Mel's Hole 15 years ago, a strange man named Mel Waters called in to the Art Bell radio program, claiming he had discovered a mysterious and infinite hole on his property near Ellensburg, Washington. Quickly dubbed Mel's Hole, the strange legend of the never-ending pit and its paranormal characteristics spiraled farther and farther. When skeptics looked more closely, they discovered that no man named Mel Waters ever lived near Ellensburg. To this day the hole's existence and the man's true identity remain unverified. When Waters first called in to the program he claimed to have found a hole that by his calculations, was greater than 80,000 feet.

How do I love thee? Let me Instagram it In 2013, Lang Leav self-published a small debut poetry collection, Love & Misadventure, online. Two years later, she was meeting her fans on a book tour in the Philippines. “It was insane,” she says. High Strangeness Kansas - Jeff Templin is a amateur photographer. He says he's seen it all until now. While taking pictures of wildlife back in February, something caught his eye. He said it looked like an unusual contrail. "Right over the city, clear as a bell," said Templin. "Anyone that was looking up would have seen it.

eclectic excerpts delivered to your email every day from editor Richard Vague Today's encore selection -- from Quantum: Einstein, Bohr, and the Great Debate about the Nature of Reality by Manjit Kumar. Albert Einstein (1879-1955), the physicist who developed the theory of relativity, was born and spent his earliest years in Germany: " 'The people of Ulm are mathematicians' was the unusual medieval motto of the city on the banks of the Danube in the south-western corner of Germany where Albert Einstein was born. It was an apt birthplace on 14 March 1879 for the man who would become the epitome of scientific genius. The back of his head was so large and distorted, his mother feared her newborn son was deformed.