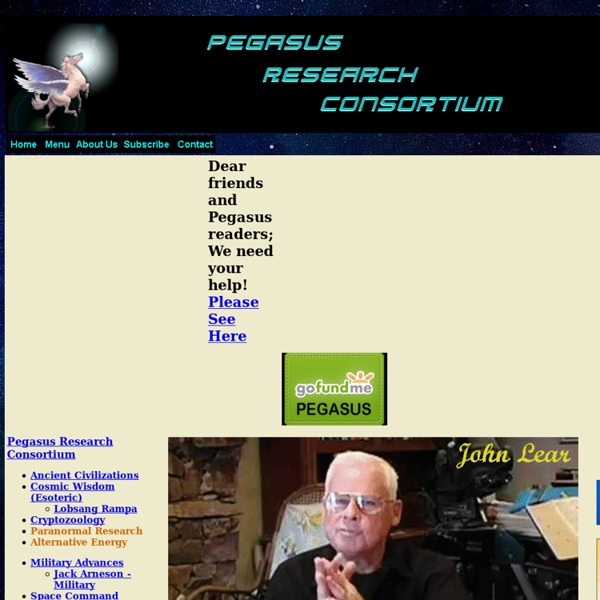 High Strangeness Kansas - Jeff Templin is a amateur photographer. He says he's seen it all until now. While taking pictures of wildlife back in February, something caught his eye. He said it looked like an unusual contrail. "Right over the city, clear as a bell," said Templin. Templin says the aircraft made several; severe 180 degree turns in the sky in the shape of an "S", even more unusual. "Absolutely silent, no sound," he said. So he snapped a few photos and took it home. "When I put it on my computer and processed them, I was surprised to see this triangular shape that is not like anything you typically see," he said. Templin says he's a big fan of air planes, so there was no doubt what he saw wasn't....we'll you know. "It was one of ours or at least man made for sure, so unidentified yes, but alien, no," he said. We reached out to several aviation experts, including McConnell.

UFOContact.com | Hub of the ET Contact Movement Mel's Hole 15 years ago, a strange man named Mel Waters called in to the Art Bell radio program, claiming he had discovered a mysterious and infinite hole on his property near Ellensburg, Washington. Quickly dubbed Mel's Hole, the strange legend of the never-ending pit and its paranormal characteristics spiraled farther and farther. When skeptics looked more closely, they discovered that no man named Mel Waters ever lived near Ellensburg. When Waters first called in to the program he claimed to have found a hole that by his calculations, was greater than 80,000 feet. As the story became more elaborate, Mel's Hole captivated listeners, many of whom were eager to verify the hole's existence. Red Elk appeared out of nowhere in 2008, claiming he was well-aquainted with the hole and that it had many bizarre properties. Today, the weird tale of Mel's Hole is roundly considered the work of mentally unstable attention seekers, or even a ploy for better radio ratings.

International Center for Abduction Research Earthfiles.com Headline News maar WHALE The 37th Parallel a UFO Highway? Opemmindstv explains, “Ex-Deputy Sherriff Chuck Zukoswki has spent 25 years investigating mysterious phenomena across America. From his extensive research he’s spotted an alarming pattern – a growing list of eye-witness UFO reports along a 3,000 mile stretch through the heart of America. This stretch of UFO sightings corresponds with the 37th degree parallel, and Chuck has noticed that a number of military bases, including the famous Area 51, exist on the same parallel.

Download Atomic Alarm Clock - Computer alarm clock and customize tray clock UFO SIGHTINGS DAILY ExE ASCII | Astrobaby's random thoughts A quick post here. I have already written a Teensy loader for this, and thought somebody might enjoy it without the device. So I decided to fill in a gap while all this craziness about BadBios is around… Magical text here (Will only work in DOS/Win9x/Win2k/XP) so fire up your virtual machines … and enjoy some Descent …. Copy and paste the above text and save with .COM extension & run.. Like this: Like Loading...