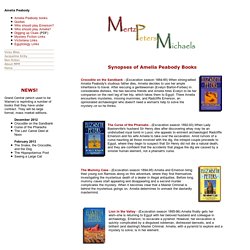 After rescuing a gentlewoman (Evelyn Barton-Forbes) in considerable distress, the two become friends and Amelia hires Evelyn to be her companion on the next leg of her trip, which takes them to Egypt. There Amelia encounters mysteries, missing mummies, and Radcliffe Emerson, an opinionated archaeologist who doesn't need a woman's help to solve the mystery--or so he thinks. The Curse of the Pharoahs - (Excavation season 1892-93) When Lady Baskerville's husband Sir Henry dies after discovering whay may be an undisturbed royal tomb in Luxor, she appeals to eminent archaeologist Radcliffe Emerson and his wife Amelia to take over the excavation. The Deeds of the Disturber - (Excavation season Summer 1896) This time Amelia doesn't need to leave England to find murder and mayhem.

Ellery Queen. In Search of the Classic Mystery Novel. This is a summary page linking to hopefully what will be a complete set of reviews of the Ellery Queen novels. 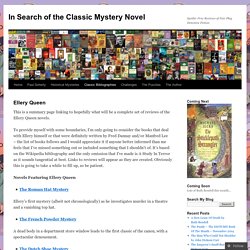 To provide myself with some boundaries, I’m only going to consider the books that deal with Ellery himself or that were definitely written by Fred Dannay and/or Manfred Lee – the list of books follows and I would appreciate it if anyone better informed than me feels that I’ve missed something out or included something that I shouldn’t of. It’s based on the Wikipedia bibliography and the only omission that I’ve made is A Study In Terror as it sounds tangential at best. Links to reviews will appear as they are created. Obviously this is going to take a while to fill up, so be patient. Novels Featuring Ellery Queen The Roman Hat Mystery Ellery’s first mystery (albeit not chronologically) as he investigates murder in a theatre and a vanishing top hat. The French Powder Mystery The Dutch Shoe Mystery. Ellery Queen Bibliography. Ellery Queen Works. 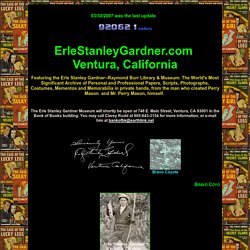 Perry Mason, himself. The Erle Stanley Gardner Museum will shortly be open at 748 E. Main Street, Ventura, CA 93001 in the Bank of Books building. Ventura, California was the birthplace of the most successful fictional lawyer in literary history. EMAIL John Anthony Miller We are down to our last few stacks of books. Click here to order ESG's Ventura: Birthplace of Perry Mason from Phantom Bookshop Hey, just who is this guy, anyway? Keith Burns says: 'Donate now, or be forever square.' We are almost out of "Sharks Never Sleep" so order yours below! We Dedicate This Web Site to our Bus, and The Erle Stanley Gardner Mobile Museum, 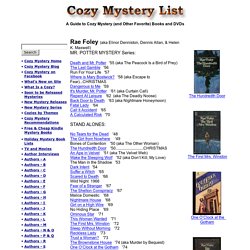 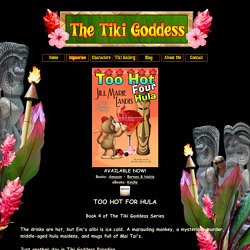 A marauding monkey, a mysterious murder, middle-aged hula maidens, and mugs full of Mai Tai's. Just another day in Tiki Goddess Paradise . . . Crime-solving sleuth Em Johnson and her Uncle Louie, owner of the famous Tiki Goddess Bar on Kauai, head for the Cocktail Shake Off Competition in Honolulu. What is supposed to be a fun trip to a mixologist contest turns weird when Louie's legendary "Booze Bible" is stolen, and Em's ex-husband winds up dead--with Em the number-one suspect.