Make It Stick — Peter C. Brown, Henry L. Roediger III, Mark A. McDaniel. To most of us, learning something “the hard way” implies wasted time and effort. 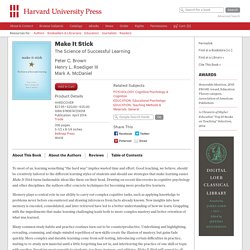 Good teaching, we believe, should be creatively tailored to the different learning styles of students and should use strategies that make learning easier. Make It Stick turns fashionable ideas like these on their head. Drawing on recent discoveries in cognitive psychology and other disciplines, the authors offer concrete techniques for becoming more productive learners. Memory plays a central role in our ability to carry out complex cognitive tasks, such as applying knowledge to problems never before encountered and drawing inferences from facts already known. 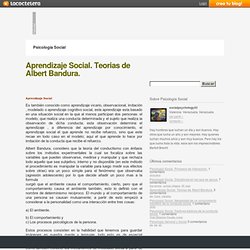 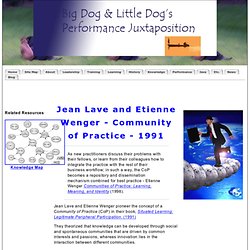 Jean Lave and Etienne Wenger pioneer the concept of a Community of Practice (CoP) in their book, Situated Learning: Legitimate Peripheral Participation. (1991) They theorized that knowledge can be developed through social and spontaneous communities that are driven by common interests and passions, whereas innovation lies in the interaction between different communities. A community of practice defines itself along three dimensions: What it is about: A joint enterprise as understood and continually renegotiated by its members. How it functions: A mutual engagement that bind members together into a social entity. Lave and Wenger Further Reading. David A. Kolb on experiential learning. Contents: introduction · david a. kolb · david kolb on experiential learning · david kolb on learning styles · issues · developments – jarvis on learning · a guide to reading · links · how to cite this piece As Stephen Brookfield (1983: 16) has commented, writers in the field of experiential learning have tended to use the term in two contrasting senses.

On the one hand the term is used to describe the sort of learning undertaken by students who are given a chance to acquire and apply knowledge, skills and feelings in an immediate and relevant setting. 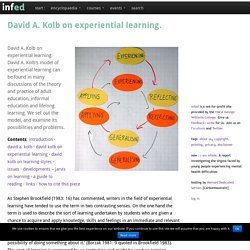 Experiential learning thus involves a, ‘direct encounter with the phenomena being studied rather than merely thinking about the encounter, or only considering the possibility of doing something about it.’ (Borzak 1981: 9 quoted in Brookfield 1983). The second type of experiential learning is ‘education that occurs as a direct participation in the events of life’ (Houle 1980: 221). 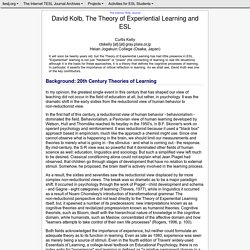 "Experiential" learning is not just "fieldwork" or "praxis" (the connecting of learning to real life situations) although it is the basis for these approaches, it is a theory that defines the cognitive processes of learning. In particular, it asserts the importance of critical reflection in learning. As we shall see, David Kolb was one of the key contributors. Background: 20th Century Theories of Learning In my opinion, the greatest single event in this century that has shaped our view of teaching did not occur in the field of education at all, but rather, in psychology. In the first half of this century, a reductionist view of human behavior - behaviorialism - dominated the field.