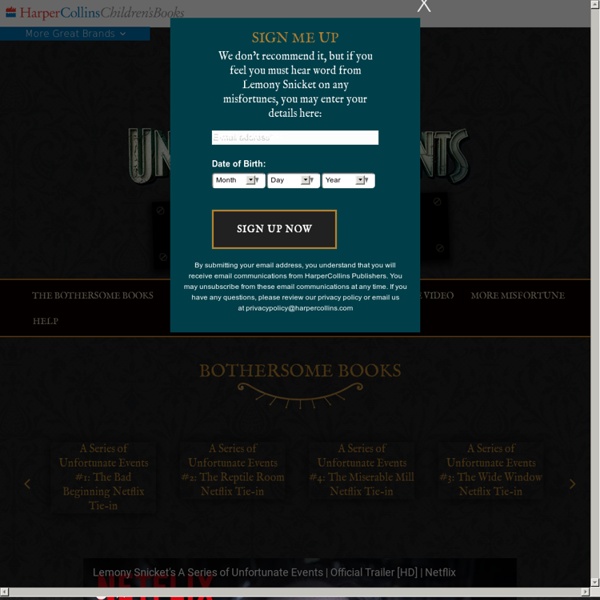 We’ve ignored Lemony Snicket’s cautious advice and are implementing our misguided plan to drop five thousand copies of THE BAD BEGINNING across the USA, blanketing this unlucky country with the first book in the saddest series about even sadder orphans. On Friday, July 13th, books will rain from the sky and unless you have an abnormally sturdy umbrella, you should scream and run away . . . at once! if you enjoy such unpleasantries and prepare yourself for the dire day ahead!

Terry Pratchett Larry Finlay, MD at Transworld Publishers: “I was deeply saddened to learn that Sir Terry Pratchett has died. The world has lost one of its brightest, sharpest minds. In over 70 books, Terry enriched the planet like few before him. As all who read him know, Discworld was his vehicle to satirize this world: he did so brilliantly, with great skill, enormous humour and constant invention.

Julie Kagawa Julie Kagawa, the New York Times bestselling author of the Iron Fey and Blood of Eden series was born in Sacramento, California. But nothing exciting really happened to her there. So, at the age of nine she and her family moved to Hawaii, which she soon discovered was inhabited by large carnivorous insects, colonies of house geckos, and frequent hurricanes.

The Golden Door - Deltora Quest The quest continues... Explore the world of Deltora! The walled city of Weld is under attack from ferocious flying creatures that raid in the night, bringing death and destruction. Brandon Mull Attention Apprentice Caretakers! You may have read about centaurs and satyrs, fairies and fog giants. But have you actually seen them? Now you can. Learn more about The Caretaker’s Guide to Fablehaven. Illustrated Books The Library Dragon Written by Carmen Agra Deedy Illustrated by Michael P. White When Sunrise Elementary School advertised for a thick-skinned librarian with a burning love of books, Miss Lotta Scales knew she was perfect for the job. Who could guard books better than a REAL dragon? "She kept a fiery eye out to make sure no one removed any books from the shelves.... The very thought of sticky little fingerstouching and clutching, pawing and clawing, smearing and tearing her precious books just made her hot under the collar."

Author & Illustrator This was posted 2 days ago. It has 344 notes. some tests that Joe Schmidt and I did a few months back. Not for anything specific but they were really fun. Jacqueline Wilson By entering this competition, you agree to accept and be bound by these terms and conditions. This competition is open to anyone aged 13 or over who is a resident of the UK or the Republic of Ireland, except for employees of The Random House Group Limited (the promoter), its subsidiary companies, their families and any other company connected with the competition. The promoter cannot accept entries from entrants aged 12 or under and parents or guardians must enter on their behalf. The closing date for the competition is midnight GMT 5th June 2014 (closing date). Entries received after the closing date will not be considered. Responsibility will not be accepted for lost or damaged entries, whether due to system error or otherwise.

Jason Fry I’m the author of The Jupiter Pirates space-fantasy saga for young adults, published by HarperCollins. The series begins with The Jupiter Pirates: Hunt for the Hydra, then continues with Curse of the Iris. The third novel, The Rise of Earth, is on the way … with more to come. The Jupiter Pirates is part high-seas adventure and part space-age epic — a saga about a solar system on the brink of war and one family caught in the middle of it. Drahos Zak Drahos Zak arrived in Australia from the Czech Republic in 1980 after completing a PhD in Illustration and Graphic Design at Charles University, Prague. In Australia Drahos has worked as an Illustrator for various newspapers and magazines, but it is his illustrations for children’s books that have gained him international recognition.

Frances Hardinge After she had won the 2015 Costa Book of the Year Award for The Lie Tree, an interviewer remarked to Frances Hardinge that not only was it the first children’s book to win the prestigious award since Philip Pullman’s The Amber Spyglass in 2001 but both books showed ‘a willingness to tackle complex moral issues and make them accessible to children’. Hardinge replied that ‘first and foremost, I tell stories’, however, she continued, ‘I tend to assume that young readers can understand quite a lot, so… some of my stories have included things that are actually quite dark’. She admitted also, ‘my books tend to be a bit of an odd mix’ and ‘I can’t quite control the impulse to fiddle and make things more odd’. In The Lie Tree, these dark things include the death by presumed suicide of its teenage heroine Faith’s father, the Reverend Erasmus Sunderly.

Mem Fox Picture me flat on the floor in a star shape: that’s where I am. I’ve been working for many months with my website designers (massive applause for Enee Solutions) to update the site and make it as friendly and fascinating as possible. I hope you’ll love it. How Shaun Tan transformed children’s literature The king said, “What punishment should someone receive who drags an innocent victim out of bed and throws her into the river to drown?” Sample the FT’s top stories for a week You select the topic, we deliver the news.

Author & Ilustrator Half the earth's surface is covered by water more than a mile deep, but most of this watery world is a mystery to us. In fact, more people have stood on the surface of the moon than have visited the deepest spot in the ocean. Come along as we travel down, down, down, from the surface to the bottom of the sea. Along the way you can see jellyfish that flash like a neon sign, creatures with teeth so big, they can't close their mouths, and even a squid as long as a bus, which battles to the death with a sperm whale, the largest predator on earth. 40 pages Houghton Mifflin Harcourt 2008 About The Author Barbara Park was best-known as the creator and author of the New York Times bestselling Junie B. Jones series, the stories of an outrageously funny kindergartener who has kept kids (and their grownups) laughing—and reading—for over two decades. Published by Random House Books for Young Readers, the series has sold over 60 million copies in North America alone, has been translated into multiple languages and is a beloved and time-honored staple in elementary school classrooms around the world. The series was consistently a #1 New York Times bestseller, spending over 180 weeks on the list, and Barbara and her books were profiled in such national outlets as Time, Newsweek, USA Today, The New York Times, and Today.