Taking Notes By Hand May Be Better Than Digitally, Researchers Say 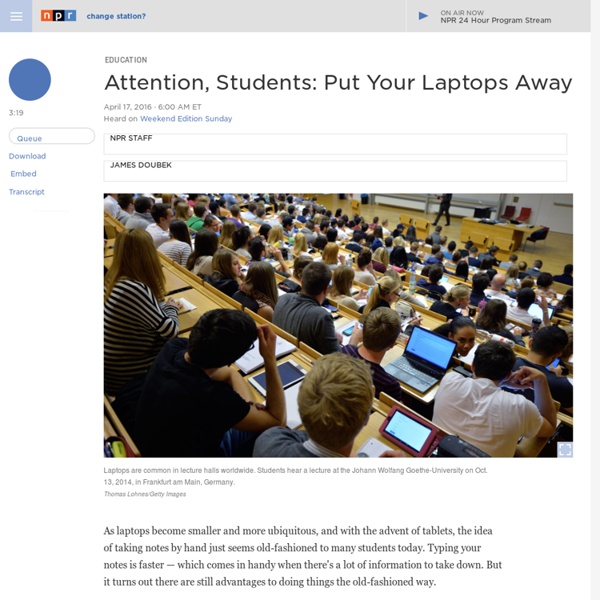 Laptops are common in lecture halls worldwide. Students hear a lecture at the Johann Wolfang Goethe-University on Oct. 13, 2014, in Frankfurt am Main, Germany. Thomas Lohnes/Getty Images hide caption toggle caption Thomas Lohnes/Getty Images Laptops are common in lecture halls worldwide. As laptops become smaller and more ubiquitous, and with the advent of tablets, the idea of taking notes by hand just seems old-fashioned to many students today. For one thing, research shows that laptops and tablets have a tendency to be distracting — it's so easy to click over to Facebook in that dull lecture. In the study published in Psychological Science, Pam A. "When people type their notes, they have this tendency to try to take verbatim notes and write down as much of the lecture as they can," Mueller tells NPR's Rachel Martin. Mueller and Oppenheimer cited that note-taking can be categorized two ways: generative and nongenerative. But the students taking notes by hand still performed better.

Fomo, stress and sleeplessness: are smartphones bad for students? As with all technology, mobile phones can have their pros and cons, depending on how they are used. At their best, they can be useful tools for staying in touch, finding out new information and co-ordinating social activities. At worst, they can negatively affect concentration, communication and sleep, or increase fear of missing out, procrastination and stress. Will changing your Facebook profile picture do anything for marriage equality? As SCOTUS debates the constitutionality of Proposition 8 and DOMA this week, Facebook users all over the nation have become part of a burgeoning social media trend. Supporters of marriage equality have been changing their profile pictures to the icon on the left, a version of the Human Rights Campaign logo designed specifically to indicate support for same-sex marriage rights. Although many people have said that it's been personally meaningful to sign onto Facebook and see a screen full of red avatars, many have criticized the trend for being a silly way of "showing support" without actually accomplishing anything significant. However, although the SCOTUS justices might not be checking Facebook to tally up the red avatars before rendering a decision, a demonstration of solidarity like this one really could end up making an impact. We don't really care so much about what we should do.

Replication studies: Bad copy For many psychologists, the clearest sign that their field was in trouble came, ironically, from a study about premonition. Daryl Bem, a social psychologist at Cornell University in Ithaca, New York, showed student volunteers 48 words and then abruptly asked them to write down as many as they could remember. Next came a practice session: students were given a random subset of the test words and were asked to type them out. Bem found that some students were more likely to remember words in the test if they had later practised them. Effect preceded cause. Bem published his findings in the Journal of Personality and Social Psychology (JPSP) along with eight other experiments1 providing evidence for what he refers to as “psi”, or psychic effects.

edtechmagazine As many education tools go digital, some people have feared that libraries may go the way of the dinosaur. However, the skills that students need to thrive in a modern world continue to adapt, and they need places where they can learn such skills. Libraries have the opportunity to become havens of future-ready skills lessons to meet that need. Libraries Ready to Code, a program from the American Library Association and Google, aims to do just that by making sure “libraries have the resources, capacity, and inspiration to embrace activities that promote computational thinking and computer science among our nation’s youth.” With the initiative now in its third phase, School Library Journal reports that ALA and Google will select up to 50 libraries to receive resources and support to develop coding programs, and participating libraries will assist with creating a toolkit for all libraries to use. SIGN UP: Get more news from the EdTech newsletter in your inbox every two weeks!

2nd Grade Students Cover Their Teacher’s Dress In Drawings, And Her Story Takes Over The Internet Sometimes arming a bunch of 8-year-olds with paint and markers doesn’t have to result in a disaster. In fact, it can turn into a beautiful work of art! This is exactly what happened to Haley Curfman, a 2nd-grade teacher in Blackwell, Oklahoma. Haley bought a beautiful white dress, set it up in her classroom and encouraged her students to draw on it. The only rule she had – children were not allowed to cross out anything. The result was so amazing it went viral. What Kind of Thinker Believes in God? A bat and a ball cost $1.10 in total. The bat costs $1.00 more than the ball. How much does the ball cost? Your answer to this question will help me guess whether you believe in God. That statement may seem as counterintuitive as the correct price of the ball--$0.05--but with both, it all makes sense once you hear the explanation. For many, the intuitive answer is $0.10, and they must override their first instinct if they hope to answer correctly.

Why psychology isn't science - latimes Psychologist Timothy D. Wilson, a professor at the University of Virginia, expressed resentment in his Times Op-Ed article on Thursday over the fact that most scientists don't consider his field a real science. He casts scientists as condescending bullies: "Once, during a meeting at my university, a biologist mentioned that he was the only faculty member present from a science department. 5 Digital Literacy Skills All Modern Learners Should Have [Infographic] Having good digital literacy skills just makes sense in a digital world. The messages we create and consume, and the data we generate and absorb, require digital literacy skills to some degree. So if you’re new to them, start with checking out this infographic from Time to Know. It’s called Essential Digital Literacy Skills for the 21st Century Worker. This great graphic cites Professor Yoram Eshet, a leader in digital literacy research from the Open University of Israel.