I’m Returning to Single-Tasking. By Leo Babauta I have a confession to make: despite writing books on the subject, along with numerous posts, I haven’t been single-tasking lately. 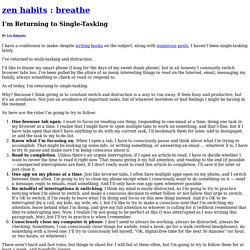 I’ve returned to multi-tasking and distraction. I’d like to blame my smart phone (I long for the days of my sweet dumb phone), but in all honesty I constantly switch browser tabs too. I’ve been pulled by the allure of so many interesting things to read on the Internet, email, messaging my family, always something to check or read or respond to. As of today, I’m returning to single-tasking. Why? So here are the rules I’m going to try to follow: One browser tab open. These aren’t hard and fast rules, but things to shoot for. I’m not doing this to be more productive, more focused, more disciplined, more perfect. The Myth of Multitasking: Why Fewer Priorities Leads to Better Work. The word priority didn’t always mean what it does today. 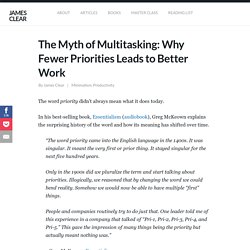 In his best-selling book, Essentialism (audiobook), Greg McKeown explains the surprising history of the word and how its meaning has shifted over time. The word priority came into the English language in the 1400s. It was singular. It meant the very first or prior thing. It stayed singular for the next five hundred years. The Myth of Multitasking Yes, we are capable of doing two things at the same time. What is impossible, however, is concentrating on two tasks at once. This wouldn’t be a big deal if the human brain could transition seamlessly from one job to the next, but it can’t. Switching cost is the disruption in performance that we experience when we switch our attention from one task to another. In other words, because of email alone we typically waste one out of every six minutes. While we’re on the subject, the word multitasking first appeared in 1965 IBM report talking about the capabilities of its latest computer. [1]

Constant Task Switching. By Leo Babauta I know I’m losing focus when I’m constantly jumping around from task to task. 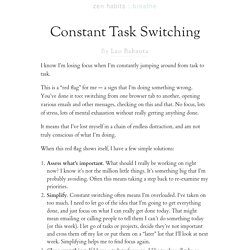 This is a “red flag” for me — a sign that I’m doing something wrong. You’ve done it too: switching from one browser tab to another, opening various emails and other messages, checking on this and that. No focus, lots of stress, lots of mental exhaustion without really getting anything done. It means that I’ve lost myself in a chain of endless distraction, and am not truly conscious of what I’m doing. When this red flag shows itself, I have a few simple solutions: Assess what’s important. The practice of simplifying, clearing things away and staying with what I’m doing is incredibly useful, and something I haven’t mastered yet. In my experience, it’s a process of letting go, and accepting. This is What Heavy Multitasking Could Be Doing To Your Brain. Multitasking may affect crucial areas of the brain’s emotional and cognitive centres. 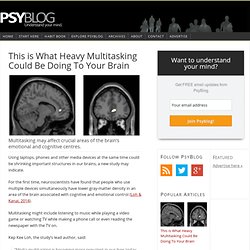 Using laptops, phones and other media devices at the same time could be shrinking important structures in our brains, a new study may indicate. For the first time, neuroscientists have found that people who use multiple devices simultaneously have lower gray-matter density in an area of the brain associated with cognitive and emotional control (Loh & Kanai, 2014). Multitasking might include listening to music while playing a video game or watching TV while making a phone call or even reading the newspaper with the TV on. Kep Kee Loh, the study’s lead author, said: “Media multitasking is becoming more prevalent in our lives today and there is increasing concern about its impacts on our cognition and social-emotional well-being.Our study was the first to reveal links between media multitasking and brain structure.” The researchers found that this association had nothing to do with personality.

Tasks Management. Embrace Single-Tasking to Boost Your Team's Productivity. You think you can multitask? 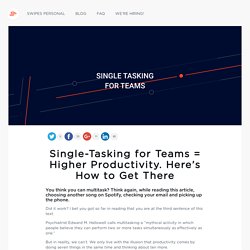 Think again, while reading this article, choosing another song on Spotify, checking your email and picking up the phone. Did it work? I bet you got so far in reading that you are at the third sentence of this text. Psychiatrist Edward M. Hallowell calls multitasking a “mythical activity in which people believe they can perform two or more tasks simultaneously as effectively as one.” But in reality, we can’t. By the way, this is how our brain looks on multitasking. This persistent illusion we owe to computer engineering. If we weren’t so busy multitasking, we would have had the time to read the research that shows multitasking takes twice as much time to complete the same tasks, and with much more errors. That’s why reinventing how teams work starts with establishing single-tasking for yourself and your team members. Let’s look at the second piece in our series on how to make teamwork work and demystify productivity. I’m Returning to Single-Tasking.