Growing Up Digital, Wired for Distraction 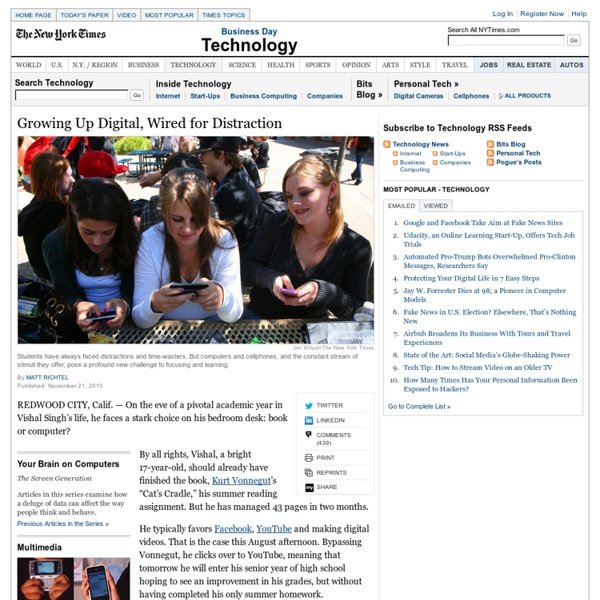 By all rights, Vishal, a bright 17-year-old, should already have finished the book, ’s “Cat’s Cradle,” his summer reading assignment. But he has managed 43 pages in two months. He typically favors , and making digital videos. That is the case this August afternoon. Bypassing Vonnegut, he clicks over to YouTube, meaning that tomorrow he will enter his senior year of high school hoping to see an improvement in his grades, but without having completed his only summer homework. On YouTube, “you can get a whole story in six minutes,” he explains. Students have always faced distractions and time-wasters. Researchers say the lure of these technologies, while it affects adults too, is particularly powerful for young people. “Their brains are rewarded not for staying on task but for jumping to the next thing,” said Michael Rich, an associate professor at Harvard Medical School and executive director of the Center on Media and Child Health in Boston. But he also plays video games 10 hours a week. Related:  Multitasking

The new marshmallow test: Resisting the temptations of the web By Annie Murphy Paul This story also appeared at: Living rooms, dens, kitchens, even bedrooms: Investigators followed students into the spaces where homework gets done. Pens poised over their “study observation forms,” the observers watched intently as the students—in middle school, high school, and college, 263 in all—opened their books and turned on their computers. For a quarter of an hour, the investigators from the lab of Larry Rosen, a psychology professor at California State University-Dominguez Hills, marked down once a minute what the students were doing as they studied. Photo by Erin Scott Although the students had been told at the outset that they should “study something important, including homework, an upcoming examination or project, or reading a book for a course,” it wasn’t long before their attention drifted: Students’ “on-task behavior” started declining around the two-minute mark as they began responding to arriving texts or checking their Facebook feeds.

Kids' Self-Control Is Crucial for Their Future Success Self-control—the ability to regulate our attention, emotions and behaviors—emerges in childhood and grows throughout life, but the skill varies widely among individuals. Past studies have reported that self-control is partially inherited and partially learned and that those with less self-control are more likely to be unemployed, en­gage in unhealthy behaviors such as overeating, and live a shorter life. A recent study in the Proceedings of the National Academy of Sciences USA tying childhood self-control to health and well-being in adulthood suggests that everyone, not just those most lacking the skill, would benefit from a self-control boost. Psychologist Terrie E. Moffitt of Duke University and her team focused on the self-control of a group of 1,037 children born in 1972 and 1973 in Dunedin, New Zealand. In addition to surveying and ruling out intelligence and socioeconomic status as possible explanations, the team explored whether differences in upbringing could play a role.

Freedom, digital distraction and control Annie Murphy Paul has an excellent article in Slate and this publication this week about the issue of digital distraction while learning. A recently published study by psychologist Larry Rosen found that in a short 15-minute period of observation, teenagers spent only 65 percent of their time studying. Their attention drifted after an average of 2 minutes from reading and writing their assignments to activities like Facebook, texting and instant messaging–and all this was while they knew they were being watched. Digital distraction or multitasking is a modern scourge, not just for young people. The question is what to do about it. Control by authority means putting the teacher and school in charge of students’ access to technology: banning cellphones in school, instituting “screens down” policies, and enlisting teachers to police students’ behavior from moment to moment. Control through technology means designing tools to nudge students in the direction of desired use.

How Does Multitasking Change the Way Kids Learn? Using tech tools that students are familiar with and already enjoy using is attractive to educators, but getting students focused on the project at hand might be more difficult because of it. Living rooms, dens, kitchens, even bedrooms: Investigators followed students into the spaces where homework gets done. Pens poised over their “study observation forms,” the observers watched intently as the students—in middle school, high school, and college, 263 in all—opened their books and turned on their computers. For a quarter of an hour, the investigators from the lab of Larry Rosen, a psychology professor at California State University-Dominguez Hills, marked down once a minute what the students were doing as they studied. A checklist on the form included: reading a book, writing on paper, typing on the computer—and also using email, looking at Facebook, engaging in instant messaging, texting, talking on the phone, watching television, listening to music, surfing the web. Related

Millennials will benefit and suffer due to their hyperconnected lives Overview of responses In a survey about the future of the internet, technology experts and stakeholders were fairly evenly split as to whether the younger generation’s always-on connection to people and information will turn out to be a net positive or a net negative by 2020. They said many of the young people growing up hyperconnected to each other and the mobile Web and counting on the internet as their external brain will be nimble, quick-acting multitaskers who will do well in key respects. At the same time, these experts predicted that the impact of networked living on today’s young will drive them to thirst for instant gratification, settle for quick choices, and lack patience. A number of the survey respondents argued that it is vital to reform education and emphasize digital literacy. These findings come from an opt-in, online survey of a diverse but non-random sample of 1,021 technology stakeholders and critics. Here is a sampling of their predictions and arguments:

With Tech Tools, How Should Teachers Tackle Multitasking In Class? Important research compiled on the effects of students multitasking while learning shows that they are losing depth of learning, getting mentally fatigued, and are weakening their ability to transfer what they have learned to other subjects and situations. Educators as well as students have noticed how schoolwork suffers when attention is split between homework and a buzzing smartphone. Many students, like Alex Sifuentes, who admit to multitasking while studying, know the consequences well. Parents also see a big difference in their kids’ studying habits. “Devices that once were just an entertainment tool are also becoming our educational and work tools.” But for many, the solution isn’t simply to do away with the gadgets — mostly because they’re the same tools that actually help do the work, and it can be confusing for young adults to distinguish the difference between work and everything else. “Look, it’s not going away. “Look, it’s not going away. How will students stay focused?

Educational Technology and Mobile Learning: Terrific Mini Guide to Help Students Think Critically December 26, 2014 Questioning is the key to critical thinking and through questions students get to explore the deep layers of meanings that would otherwise go unnoticed. Of course not all questions have this analytical ability. For instance, closed questions tend to limit the thinking choices available for students. The same with questions that promote factual recalling. Questions that emphasize the mechanical on the analytical are out of the list. In today's post, I am sharing with you this mini guide created by Foundation of Critical Thinking which you can use with your students to help them better comprehend and apply critical thinking in their learning. I learned about this great resource from a post shared by Education to Save The World. Image credit: Foundation of Critical Thinking