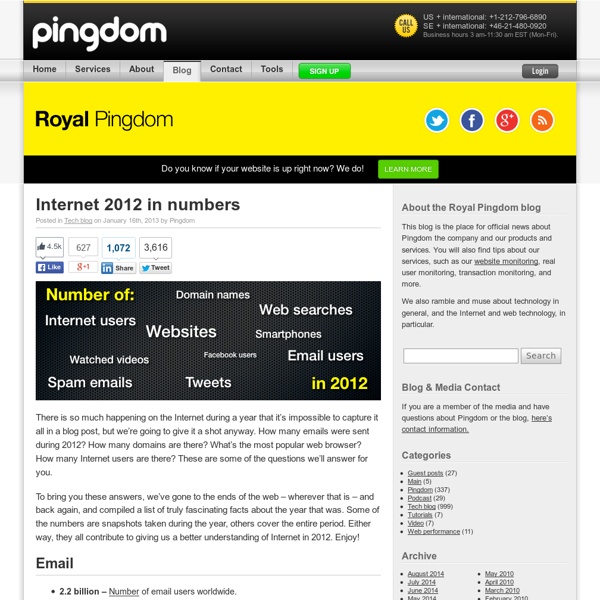 Facebook’s $1.6 billion quarter in charts: how and where it makes money - Quartz Facebook made $64 million (corrected; an earlier version of this story cited the operating profit, $523 million) on $1.585 billion in revenue in the fourth quarter of 2012, a result investors found somewhat disappointing. Take a closer look at how and where Facebook is making its money, courtesy of slides (pdf) the company released along with its earnings statement. InPho Data Blog » Network of all thinkers (pt.1) Posted on November 9, 2012 by junotk 9 Comments Similarity relations among philosophers mentioned in the SEP, as modeled by the BEAGLE Context model. The Stanford Encyclopedia of Philosophy (SEP) and the Internet Encyclopedia of Philosophy (IEP) contain tons of descriptions about a large number of thinkers. It is thus of interest to see how these thinkers are related/categorized by a semantic model of the text.

Am I addicted to the internet? Maybe, but so what? Every so often, a new study comes out that says people are “addicted” to the internet, or to digital tools, or social media — describing their anguish when cut off from these services in the same way that smokers or alcoholics react when prevented from smoking or drinking. The latest is research from a UK survey company that asked 1,000 respondents to go without internet access for 24 hours, and found that more than half of those surveyed were “upset.” But is this really that surprising? Surely by now it’s become obvious that internet access and all it brings with it is a core function of modern life, like the telephone or the automobile.

The Word "Hacker" April 2004 To the popular press, "hacker" means someone who breaks into computers. Among programmers it means a good programmer. But the two meanings are connected. To programmers, "hacker" connotes mastery in the most literal sense: someone who can make a computer do what he wants—whether the computer wants to or not. To add to the confusion, the noun "hack" also has two senses. Statistical Truisms in the Age of Big Data - Statistics Views Does Big Data make Statistics obsolete? Of course not! But, many are now suggesting it (1). We address here some of the causes and consequences of this way of thinking. Specifically, we examine some of the basic tenets of elementary statistics that are easy to forget and/or to cast aside when analyzing large comprehensive “full-population” datasets. The core methodology of knowledge discovery and value generation from data is data science, which includes a family of disciplines, one of the most important of which is statistics.

Mapping creates jobs and drives global economic growth Twenty years ago, we used paper maps and printed guides to help us navigate the world. Today, the most advanced digital mapping technologies—satellite imagery, GPS devices, location data and of course Google Maps—are much more accessible. This sea change in mapping technology is improving our lives and helping businesses realize untold efficiencies. The transformation of the maps we use everyday is driven by a growing industry that creates jobs and economic growth globally. 30/10/10 We see a lot of metrics on web and mobile apps. Our portfolio companies share their metrics with us, which we keep confidential and do not share with anyone outside of our firm. And companies that are seeking investment from USV also share their metrics with us. We also keep these metrics confidential and do not share them outside of our firm. One thing that never ceases to amaze me is how similar some of the metrics are from service to service and company to company. I like to call these the web/mobile laws of physics.

Is Big Data the Next Billion-Dollar Technology Industry? It is not news that our capacity to gather and store immense amounts of data has grown by leaps and bounds. A few years ago, it was unthinkable for a free email account to offer more than 10 or 20 megabytes of storage. Today, one stores thousands of times that amount. But that's barely scratching the surface compared to the truly massive data collection projects now under way. The Large Synoptic Survey Telescope is slated to come online in 2016. The Web Isn’t a Democracy, It’s a Meritocracy By Nathaniel Mott On March 28, 2012 I wouldn’t have this job if it weren’t for the Web. Not only would PandoDaily fail to exist, but a kid like me living out in the middle of nowhere would never have had a shot at getting in touch with the right people to make something like this happen.

Four Lessons From Evernote’s First Week On The Mac App Store Editor’s note: The following guest post is written by Phil Libin, CEO of Evernote, which is currently the No. 5 app in the Mac App Store. It also didn’t hurt that the app has been prominently featured by Apple. We just finished our first week on the Mac App Store and it might have been the most important week in Evernote’s history. Here’s how it went and what we learned: 1. Meritocracy is sweet Improved Response to Disasters and Outbreaks by Tracking Population Movements with Mobile Phone Network Data: A Post-Earthquake Geospatial Study in Haiti Abstract Background Population movements following disasters can cause important increases in morbidity and mortality. Without knowledge of the locations of affected people, relief assistance is compromised. No rapid and accurate method exists to track population movements after disasters.

Hacker Culture: The Key To Future Prosperity? Editor’s Note: This guest post was written by Dan Abelon, Founder of SpeedDate. Dan blogs about global startup issues at WorldStartups.org. One of the most exciting trends of the early 21st century has been the explosion of hacker culture around the world.