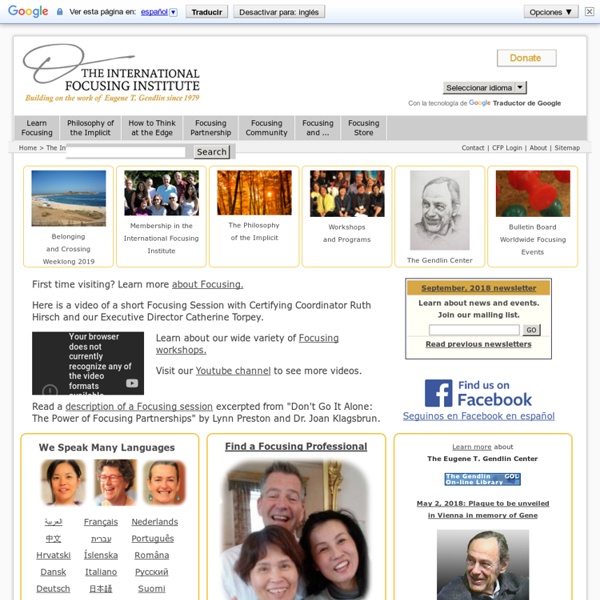 Focusing shows how to pause the on-going situation and create a space for new possibilities for carrying forward. This practice, developed from the Philosophy of the Implicit, shows how to apply open attention to something which is directly experienced but is not in words. Your body knows more about situations than you are explicitly aware of. For example, your body picks up more about another person than you consciously know. With a little training, you can get a bodily feel for the 'more' that is happening in any situation. From that bodily feel come small steps that lead toward resolution.

Related:  Personal Development • How To Focus Your Attention • Focusing and Mindfulness

30 Questions to Ask Yourself Before You Die. {Via studioflowerpower on etsy} “Rather than money, than fame, than love…give me truth.” ~ Thoreau I woke up this morning and my life clock marked 30. My first sleep-deprived idea was to pack a small suitcase, get on the first train, move to another country, change my name, change my hair color (or get plastic surgery if needed), and start from scratch. When I don’t know how to deal with life, I hide sometimes. And others, I fight it.

Focus: Single-Tasking and Productivity, by Leo Babauta ‘Concentrate all your thoughts upon the work at hand. The sun’s rays do not burn until brought to a focus.’ ~Alexander Graham Bell Many of us grew up in the age of multi-tasking, where you couldn’t call yourself productive if you weren’t a good multi-tasker. Getting Started with Todoist Projects help you organize your tasks into separate lists. Your Todoist comes with a list of standard projects to get you started, but you can create, delete, re-name, re-arrange, and color-code your projects any way you like. Creating new projects Most users find it helpful to separate their tasks into broad projects like and . Then they create new Todoist projects for bigger, long-term things they’re working on.

Connecting the Dots Dec 6 2014 Connecting the Dots visual note by Nicki Hambleton using Adobe Ideas on iPad As a young child I loved Dot to Dots, joining the seemingly random patterns to reveal a recognisable image. The ONE Thing: How to Get Things Done Using The Focusing Question Source: PicJumbo. On June 23, 1885, Andrew Carnegie stood before a room of wide-eyed students at Curry Commercial College and addressed the audience. “‘Don’t put all your eggs in one basket’ is all wrong” he said. [1]

How Doing Nothing Can Help You Truly Live - Sharon Salzberg This article was originally published on The Huffington Post, May 4, 2010 When the retreat center I co-founded, the Insight Meditation Society, first opened, someone created a mock brochure describing a retreat there, with sayings like, “Come to IMS and have all the tea you could ever drink.” It also featured a wonderful made up motto for us: “It is better to do nothing than to waste your time.”

The Psychology of Flow What is it like to be fully alive, right now, engaged with what you are doing? That’s the psychology of flow. When the happiness and creativity expert Mihaly Csikszentmihalyi was studying how painters work, he noticed an odd thing. When their painting was going well they didn’t care about getting tired, hungry or uncomfortable, they just carried on. But when the painting was finished, they rapidly lost interest in it.

Super-Focus: 10 Natural Steps to Nurture Your Attention How to deal with interruptions, structure your environment, enter a flow state and much more… “Pay attention. It’s all about paying attention. Attention is vitality. Zanshin: Learning the Art of Attention and Focus From a Legendary Samurai Archer In the 1920s, a German man named Eugen Herrigel moved to Japan and began training in Kyudo, the Japanese martial art of archery. Herrigel was taught by a legendary Kyudo master named Awa Kenzo. Kenzo was convinced that beginners should master the fundamentals of archery before attempting to shoot at a real target and he took this method to the extreme. For the first four years, Herrigel was only allowed to shoot at a roll of straw just seven feet away.

Jeff Weiner On How To Focus And Get The Right Things Done Source: PicJumbo. If you want to be successful in life and work, you have to learn how to lead. But before you can lead others, you have to lead by example. You have to learn how to lead yourself. Warren Buffett's "2 List" Strategy: How to Maximize Your Focus and Master Your Priorities With well over 50 billion dollars to his name, Warren Buffett is consistently ranked among the wealthiest people in the world. Out of all the investors in the 20th century, Buffett was the most successful. Given his success, it stands to reason that Buffett has an excellent understanding of how to spend his time each day. From a monetary perspective, you could say that he manages his time better than anyone else.

Related:
Related:  Personal Development   -  How To Focus Your Attention   -  Focusing and Mindfulness   -  Focus EV   -  Attention   -  Oscar Pistorius trial grabs the world's attention   -  Attention and Intention   -  Attention   -  Focus   -  Focus   -  Focus Apps   -  Management Methods | Management Models | Management Theories   -  Monk Mind: How to Increase Your Focus : zenhabits   -  The Psychology of Flow (in under 300 words) — PsyBlog   -  Why Focus Makes Us Smarter--and 8 Ways to Sharpen Yours | Big Think   -  What the Internet is Doing to Our Brains [Epipheo.TV] - YouTube   -  How to Stay Focused When You Get Bored Working Toward Your Goals   -  Train Your Brain for Monk-Like Focus   -  How to Focus A Wandering Mind, by Wendy Hasenkamp   -  Stop Wasting Time on Things that Don't Have a Purpose in Your Life   -  Simon Sinek: How great leaders inspire action   -  Warren Buffett's "2 List" Strategy: How to Maximize Your Focus and Master Your Priorities   -  Time Blocking -- The Secret Weapon For Better Focus   -  The Secret to Productivity: Focus | Personal Branding Blog - Stand Out In Your Career   -  To Stay Focused, Manage Your Emotions - HBR   -  Taking Notes By Hand May Be Better Than Digitally, Researchers Say   -  The Pomodoro Technique® - proudly developed by Francesco Cirillo | Cirillo Company