The Psychology of Flow 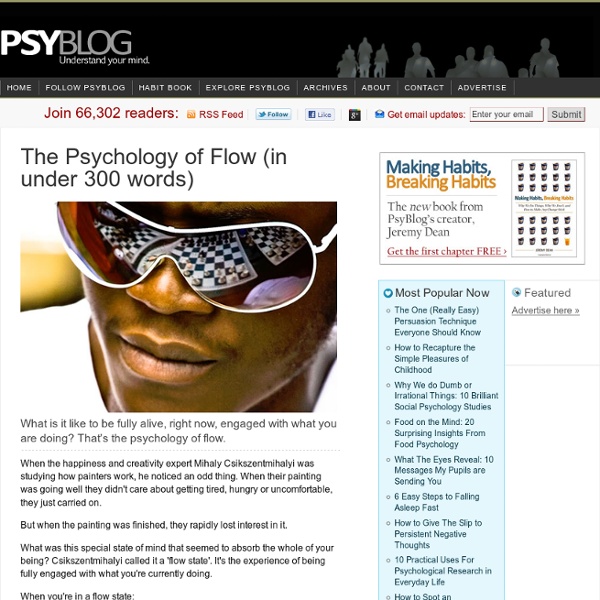 What is it like to be fully alive, right now, engaged with what you are doing? That’s the psychology of flow. When the happiness and creativity expert Mihaly Csikszentmihalyi was studying how painters work, he noticed an odd thing. When their painting was going well they didn’t care about getting tired, hungry or uncomfortable, they just carried on. But when the painting was finished, they rapidly lost interest in it. What was this special state of mind that seemed to absorb the whole of your being? When you’re in a flow state: an hour can pass in the blink of an eye,you feel what you are doing is important,you’re not self-conscious,action and awareness merges,you feel in full control,and the experience is intrinsically rewarding. To create a flow experience, you need: The experience of flow has been studied amongst surgeons, writers, artists, scientists, athletes and people just socialising and playing games. It’s not always easy to achieve but being in a state of flow is a beautiful thing.

Related:  How To Focus Your Attention

Super-Focus: 10 Natural Steps to Nurture Your Attention How to deal with interruptions, structure your environment, enter a flow state and much more… “Pay attention. It’s all about paying attention. Attention is vitality. It connects you with others. Zanshin: Learning the Art of Attention and Focus From a Legendary Samurai Archer In the 1920s, a German man named Eugen Herrigel moved to Japan and began training in Kyudo, the Japanese martial art of archery. Herrigel was taught by a legendary Kyudo master named Awa Kenzo. Kenzo was convinced that beginners should master the fundamentals of archery before attempting to shoot at a real target and he took this method to the extreme. For the first four years, Herrigel was only allowed to shoot at a roll of straw just seven feet away. When he was finally allowed to shoot at targets on the far end of the practice hall, Herrigel’s performance was dismal.

Jeff Weiner On How To Focus And Get The Right Things Done Source: PicJumbo. If you want to be successful in life and work, you have to learn how to lead. But before you can lead others, you have to lead by example. You have to learn how to lead yourself. Jeff Weiner, founder of LinkedIn, has a powerful mechanism for leadership: he has FOCUS (a.k.a. Warren Buffett's "2 List" Strategy: How to Maximize Your Focus and Master Your Priorities With well over 50 billion dollars to his name, Warren Buffett is consistently ranked among the wealthiest people in the world. Out of all the investors in the 20th century, Buffett was the most successful. Given his success, it stands to reason that Buffett has an excellent understanding of how to spend his time each day. From a monetary perspective, you could say that he manages his time better than anyone else. And that’s why the story below, which was shared directly from Buffett’s employee to my good friend Scott Dinsmore, caught my attention.

How to Stay Focused When You Get Bored Working Toward Your Goals We all have goals and dreams, but it can be difficult to stick with them. Each week, I hear from people who say things like, “I start with good intentions, but I can’t seem to maintain my consistency for a long period of time.” Or, they will say, “I struggle with mental endurance. I get started but I can’t seem to follow through and stay focused for very long.”

The ONE Thing: How to Get Things Done Using The Focusing Question Source: PicJumbo. On June 23, 1885, Andrew Carnegie stood before a room of wide-eyed students at Curry Commercial College and addressed the audience. “‘Don’t put all your eggs in one basket’ is all wrong” he said. [1] Carnegie, then 49 years old, was at his peak of success: his company, the Carnegie Steel Company, was the largest and most profitable company in the world. Focus: Single-Tasking and Productivity, by Leo Babauta ‘Concentrate all your thoughts upon the work at hand. The sun’s rays do not burn until brought to a focus.’ ~Alexander Graham Bell Many of us grew up in the age of multi-tasking, where you couldn’t call yourself productive if you weren’t a good multi-tasker. We learned to always have several balls in the air at once — while writing something on the computer, we had a phone call going, we were writing something on a notepad or paper form, we were reviewing documents, sometimes even holding a meeting at the same time.

To Stay Focused, Manage Your Emotions A leader’s most precious resource is not their time. It’s their focused attention. Time merely passes, while focused attention makes things happen. When we’re able to gather and direct our attention toward a particular task or interaction, we can have a significant impact in a minimal amount of time. Time Targets: What's the Focus of Your Life? The level of fulfillment that you experience in life is directly related to “where” you spend your time. Most people are stressed because they’re addicted to urgency—the phone rings or a text comes in and you feel urgently compelled to answer it, even though the conversation you’re in with your child is truly much more important. A life of fulfillment is one in which we put urgency in its place and remember that the ultimate target is to spend our lives doing what is most important to us. In which of these zones do you spend most of your time?

Related:
Related:  How To Focus Your Attention   -  Focus EV   -  Attention   -  Oscar Pistorius trial grabs the world's attention   -  Week 4 - Work Force Focus   -  Attention and Intention   -  Attention   -  Focus   -  Focus   -  Focus Apps   -  The International Focusing Institute   -  Management Methods | Management Models | Management Theories   -  Monk Mind: How to Increase Your Focus : zenhabits   -  qmp_2012.pdf   -  Why Focus Makes Us Smarter--and 8 Ways to Sharpen Yours | Big Think   -  National Geographic Found   -  What the Internet is Doing to Our Brains [Epipheo.TV] - YouTube   -  A Soft Murmur   -  How to Stay Focused When You Get Bored Working Toward Your Goals   -  Mihaly Csikszentmihalyi: Flow, the secret to happiness | TED Talk   -  Train Your Brain for Monk-Like Focus   -  How to Focus A Wandering Mind, by Wendy Hasenkamp   -  Stop Wasting Time on Things that Don't Have a Purpose in Your Life   -  Simon Sinek: How great leaders inspire action   -  Warren Buffett's "2 List" Strategy: How to Maximize Your Focus and Master Your Priorities   -  Time Blocking -- The Secret Weapon For Better Focus   -  The Secret to Productivity: Focus | Personal Branding Blog - Stand Out In Your Career   -  To Stay Focused, Manage Your Emotions - HBR   -  Taking Notes By Hand May Be Better Than Digitally, Researchers Say   -  The Pomodoro Technique® - proudly developed by Francesco Cirillo | Cirillo Company