How Does Multitasking Change the Way Kids Learn? 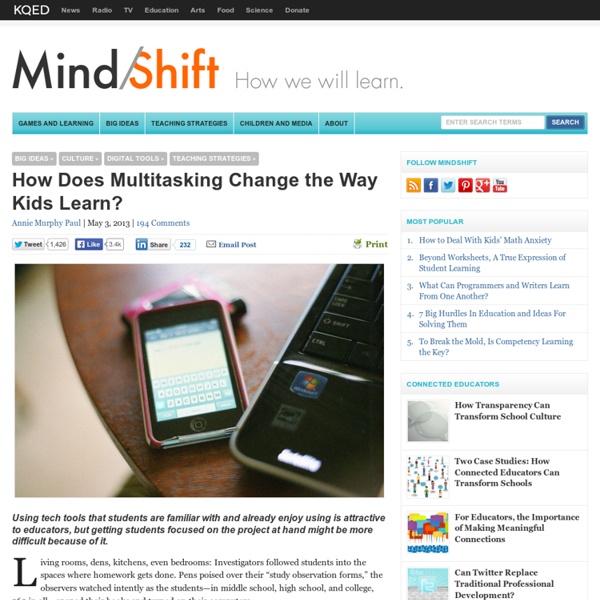 Using tech tools that students are familiar with and already enjoy using is attractive to educators, but getting students focused on the project at hand might be more difficult because of it. Living rooms, dens, kitchens, even bedrooms: Investigators followed students into the spaces where homework gets done. Pens poised over their “study observation forms,” the observers watched intently as the students—in middle school, high school, and college, 263 in all—opened their books and turned on their computers. For a quarter of an hour, the investigators from the lab of Larry Rosen, a psychology professor at California State University-Dominguez Hills, marked down once a minute what the students were doing as they studied. “We were amazed at how frequently they multitasked, even though they knew someone was watching,” Rosen says. “I don’t care if a kid wants to tweet while she’s watching American Idol, or have music on while he plays a video game. The media multitasking habit starts early. Related:  Multitasking • "nouvelles" TIC • Integrat.ably

With Tech Tools, How Should Teachers Tackle Multitasking In Class? Important research compiled on the effects of students multitasking while learning shows that they are losing depth of learning, getting mentally fatigued, and are weakening their ability to transfer what they have learned to other subjects and situations. Educators as well as students have noticed how schoolwork suffers when attention is split between homework and a buzzing smartphone. Many students, like Alex Sifuentes, who admit to multitasking while studying, know the consequences well. “When I was grounded for a couple of months and didn’t have my phone, I got done extra early with homework,” Sifuentes wrote in response to Annie Murphy Paul’s article, “How Does Multitasking Change the Way Kids Learn?” Parents also see a big difference in their kids’ studying habits. “Devices that once were just an entertainment tool are also becoming our educational and work tools.” “Look, it’s not going away. “Look, it’s not going away. How will students stay focused? Related

Why Learning and Multitasking Don’t Mix Living rooms, dens, kitchens, even bedrooms: Investigators followed students into the spaces where homework gets done. Pens poised over their “study observation forms,” the observers watched intently as the students—in middle school, high school, and college, 263 in all—opened their books and turned on their computers. For a quarter of an hour, the investigators from the lab of Larry Rosen, a psychology professor at California State University–Dominguez Hills, marked down once a minute what the students were doing as they studied. Although the students had been told at the outset that they should “study something important, including homework, an upcoming examination or project, or reading a book for a course,” it wasn’t long before their attention drifted: Students’ “on-task behavior” started declining around the two-minute mark as they began responding to arriving texts or checking their Facebook feeds. Concern about young people’s use of technology is nothing new, of course.

Fact, Opinion, False Claim, or Untested Claim Click here for a translation into Serbian by Branca Fiagic. Fact Opinion False claim Untested claim A thorny issue in critical reading involves the ambiguous terms fact and opinion Let's begin with opinion. There is no need to argue against opinions when they are recognized as self-reports rather than as claims about the real world. Most people only count statements proven by observation as facts. We need an enlarged view of fact as any statement about the real world that can be shown to be true, i.e., that is supported by converging evidence. Kinds of facts, with false factual claims, and untested claims Empirical facts Empirical facts are verified by observation, e.g., The Pacific is the largest ocean. Historical facts, though not available for observation today, are also empirically verifiable through the convergent observations of the past as recorded in primary sources. Untested claims In some cases, there is some evidence to support an empirical claim, but that evidence is not convergent.

Photo editing 101: Master the layer mask Remember the last time you gave your walls a fresh coat of paint? You probably used a roll of blue or beige masking tape to cover the baseboards and windows so you wouldn’t get paint on them. Masking tape’s digital equivalent—called a layer mask—is a timesaving feature in Adobe Photoshop, Photoshop Elements (version 9+), and the affordable yet powerful Pixelmator. Masking basics Layer masks make for a far more flexible editing experience because you’re hiding pixels instead of erasing them. You can perform all manner of non-destructive techniques with layer masks. iStockphoto/Andrew Rich #16815876 Note: You may not realize it, but many apps use automatic masking in their effects tools to change part of a photo instead of the whole thing. Add a layer mask The resulting mask looks like a white rectangle in your Layers panel and serves as a miniature representation of your document. A helpful tip: When you're working inside a layer mask, black paint conceals, white reveals. As simple as that

Understand uncertainty: probabilities Probabilities and statistics: they are everywhere, but they are hard to understand and can be counter-intuitive. So what's the best way of communicating them to an audience that doesn't have the time, desire, or background to get stuck into the numbers? Ian Short explores modern visualisation techniques and finds that the right picture really can be worth a thousand words. Visualising probabilities: an example What is the probability that a woman who tests positive for breast cancer actually has breast cancer? Figure 1: A tree diagram describing the outcomes of a mammography test. A tree diagram, such as figure 1, can help answer this question. Why visualise probabilities? Visualisations like the graph in figure 1 can enliven information, grab people's attention, inspire, and influence. The complex set of probabilities in the mammography test question is explained simply and attractively in figure 1, which guides you through the logic necessary to dissect the problem. What not to do

Classroom Laptop Users Distract Others As Well As Themselves Thursday, April 25, 2013 It won’t surprise anyone to learn that having a laptop computer open in a lecture class is an invitation to distraction for the user. But what about the students sitting nearby? A new study by a group of researchers at McMaster and York universities, both in Canada, finds evidence that laptop use in college classrooms distracts not just laptop owners, but their classmates as well. The researchers begin their article, published last month in the journal Computers & Education, by reviewing what we know about learning while our attention is divided: “Research suggests that we have limited resources available to attend to, process, encode, and store information for later retrieval. When we eventually retrieve information that was processed without interruptions, as a primary task, we are likely to experience minimal errors. These findings “are especially significant when considered in the context of student learning,” the authors note: The authors conclude: