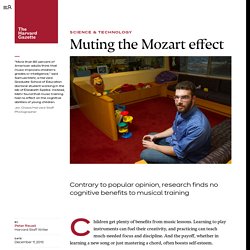 Learning to play instruments can fuel their creativity, and practicing can teach much-needed focus and discipline. And the payoff, whether in learning a new song or just mastering a chord, often boosts self-esteem. But Harvard researchers now say that one oft-cited benefit — that studying music improves intelligence — is a myth. Though it has been embraced by everyone from advocates for arts education to parents hoping to encourage their kids to stick with piano lessons, a pair of studies conducted by Samuel Mehr, a Harvard Graduate School of Education (HGSE) doctoral student working in the lab of Elizabeth Spelke, the Marshall L.

Hjärnforskare varnar Skolan digitaliseras i blindo SvD. Taking Notes: Is The Pen Still Mightier Than the Keyboard? Den uppkopplade barnhjärnan. Hjärnforskare om push-notiser: Saboterar vår arbetsförmåga – tar 25 minuter att återfå fokus. For better learning in college lectures, lay down the laptop and pick up a pen. What's the Best Music to Listen to While Working? - The Atlantic. Like most modern “knowledge” workers, I spend my days in an open office. 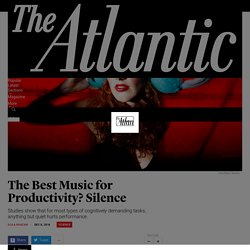 That means I also spend my days amid ringing phones, the inquisitive tones of co-workers conducting interviews, and—because we work in a somewhat old, infamous building—the pounding and drilling of seemingly endless renovations. Even so, the #content must still be wrung from my distracted brain. And so, I join the characters of trend pieces everywhere in wearing headphones almost all day, every day. 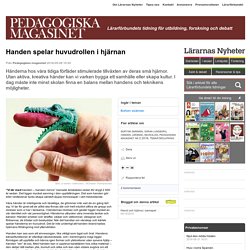 ©Christer Themptander. Taking Notes By Hand May Be Better Than Digitally, Researchers Say. Laptops are common in lecture halls worldwide.

Students hear a lecture at the Johann Wolfang Goethe-University on Oct. 13, 2014, in Frankfurt am Main, Germany. Thomas Lohnes/Getty Images hide caption toggle caption Thomas Lohnes/Getty Images Laptops are common in lecture halls worldwide. As laptops become smaller and more ubiquitous, and with the advent of tablets, the idea of taking notes by hand just seems old-fashioned to many students today.

Fomo, stress and sleeplessness: are smartphones bad for students? As with all technology, mobile phones can have their pros and cons, depending on how they are used. 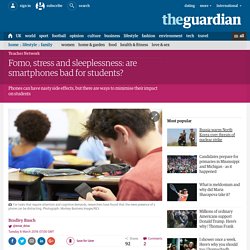 At their best, they can be useful tools for staying in touch, finding out new information and co-ordinating social activities. At worst, they can negatively affect concentration, communication and sleep, or increase fear of missing out, procrastination and stress. These potential negative consequences are especially important to consider for teenagers. Multitasking: The Brain Seeks Novelty  This is my first blog post for the Huffington Post, so let me start by introducing myself. 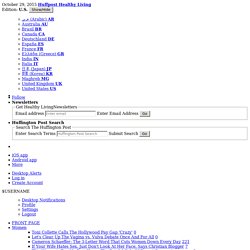 I'm a neuroscientist at the University of Texas at Austin, where I use brain imaging to study how the human mind achieves its amazing feats and why it sometimes fails. In this blog I plan to focus on how neuroscience and psychology can provide us with clues about how to live better, focusing on topics related to multitasking and information overload. Want to learn faster? Stop multitasking and start daydreaming. Information is being created and disseminated faster than any of us can absorb it. 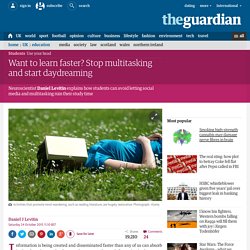 Google estimates that humans have created more information in the past five years than in all of human history - 300 exabytes of information (300,000,000,000,000,000,000) to be precise. If all that information were written on 3x5 index cards, your personal share of it would wrap around the earth twice. The pile of cards would reach to the moon three times. Multitasking Is Killing Your Brain. Our brains weren't built to multitask. 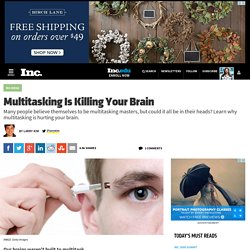 Our brains are designed to focus on one thing at a time, and bombarding them with information only slows them down. MIT neuroscientist Earl Miller notes that our brains are "not wired to multitask well... when people think they're multitasking, they're actually just switching from one task to another very rapidly. And every time they do, there's a cognitive cost. " This constant task-switching encourages bad brain habits.

Laptop multitasking hinders classroom learning for both users and nearby peers. <div class="msgBox" style="margin-top:10px;"><span class="errMsg"><div>JavaScript is disabled on your browser. 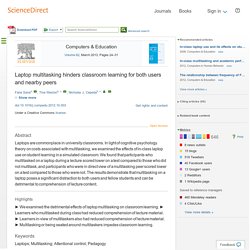 Please enable JavaScript to use all the features on this page. This page uses JavaScript to progressively load the article content as a user scrolls. Click the View full text link to bypass dynamically loaded article content. <a rel="nofollow" href=" full text</a></div></span></div><br /> Stanford News Video: Media multitaskers pay mental price, Stanford study shows. ItsComplicated.pdf. Age of Distraction: Why It’s Crucial for Students to Learn to Focus. Digital classroom tools like computers, tablets and smartphones offer exciting opportunities to deepen learning through creativity, collaboration and connection, but those very devices can also be distracting to students. 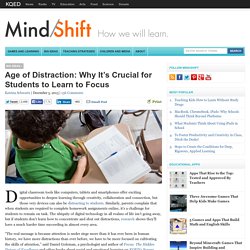 Tackling the Digital Divide: Low-Income Students Weigh In. The article For Low Income Kids, Access to Devices Could Be the Equalizer raised the possibility that mobile technology in classrooms could help narrow the digital divide between the nation’s low-income and more affluent students. The article, which included suggestions for educators about how to access devices and what do with them, struck a chord with readers. Many were outraged that some students are missing out on valuable learning resources because of their families’ socio-economic status, while others worried that bringing mobile devices into the classroom – any classroom – invites chaos.

“The internet is the modern day encyclopedia,” wrote commenter Patrick Hopkins, who grew up in a single-parent low-income household, and now teaches in an upper-middle class school district. “Teachers must have an abundant amount of trust in their students that they are staying on task when using their own devices in the classroom.”

Classroom Laptop Users Distract Others As Well As Themselves. Thursday, April 25, 2013 It won’t surprise anyone to learn that having a laptop computer open in a lecture class is an invitation to distraction for the user. Millennials will benefit and suffer due to their hyperconnected lives. Overview of responses In a survey about the future of the internet, technology experts and stakeholders were fairly evenly split as to whether the younger generation’s always-on connection to people and information will turn out to be a net positive or a net negative by 2020. Nyheter - Arkiv Notis - Nyheter - Arkiv Lunds universitet. ”Ständig uppkoppling farligt för barns hjärnor”

Några följder av IT-användning. Divided attention and memory: evidence of substantial interference ... How Does Multitasking Change the Way Kids Learn? Using tech tools that students are familiar with and already enjoy using is attractive to educators, but getting students focused on the project at hand might be more difficult because of it. With Tech Tools, How Should Teachers Tackle Multitasking In Class? Important research compiled on the effects of students multitasking while learning shows that they are losing depth of learning, getting mentally fatigued, and are weakening their ability to transfer what they have learned to other subjects and situations.

Educators as well as students have noticed how schoolwork suffers when attention is split between homework and a buzzing smartphone. Many students, like Alex Sifuentes, who admit to multitasking while studying, know the consequences well. “When I was grounded for a couple of months and didn’t have my phone, I got done extra early with homework,” Sifuentes wrote in response to Annie Murphy Paul’s article, “How Does Multitasking Change the Way Kids Learn?”

Parents also see a big difference in their kids’ studying habits. Kids' Self-Control Is Crucial for Their Future Success. Self-control—the ability to regulate our attention, emotions and behaviors—emerges in childhood and grows throughout life, but the skill varies widely among individuals. Past studies have reported that self-control is partially inherited and partially learned and that those with less self-control are more likely to be unemployed, en­gage in unhealthy behaviors such as overeating, and live a shorter life. A recent study in the Proceedings of the National Academy of Sciences USA tying childhood self-control to health and well-being in adulthood suggests that everyone, not just those most lacking the skill, would benefit from a self-control boost. Age of Distraction: Why It’s Crucial for Students to Learn to Focus.

Freedom, digital distraction and control. Annie Murphy Paul has an excellent article in Slate and this publication this week about the issue of digital distraction while learning. A recently published study by psychologist Larry Rosen found that in a short 15-minute period of observation, teenagers spent only 65 percent of their time studying. Their attention drifted after an average of 2 minutes from reading and writing their assignments to activities like Facebook, texting and instant messaging–and all this was while they knew they were being watched.

The new marshmallow test: Resisting the temptations of the web. Growing Up Digital, Wired for Distraction.