Scholars Turn Their Attention to Attention 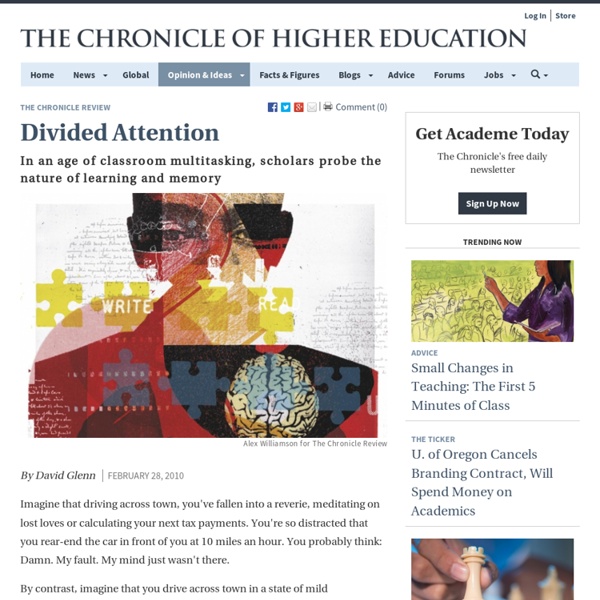 Imagine that driving across town, you've fallen into a reverie, meditating on lost loves or calculating your next tax payments. You're so distracted that you rear-end the car in front of you at 10 miles an hour. You probably think: Damn. My fault. My mind just wasn't there. By contrast, imagine that you drive across town in a state of mild exhilaration, multitasking on your way to a sales meeting. That illusion of competence is one of the things that worry scholars who study attention, cognition, and the classroom. "Heavy multitaskers are often extremely confident in their abilities," says Clifford I. Indeed, last summer Nass and two colleagues published a study that found that self-described multitaskers performed much worse on cognitive and memory tasks that involved distraction than did people who said they preferred to focus on single tasks. Experiments like that one have added fuel to the perpetual debate about whether laptops should be allowed in classrooms. Wait a minute.

What’s Lost as Handwriting Fades Does handwriting matter? Not very much, according to many educators. The Common Core standards, which have been adopted in most states, call for teaching legible writing, but only in kindergarten and first grade. But psychologists and neuroscientists say it is far too soon to declare handwriting a relic of the past. Children not only learn to read more quickly when they first learn to write by hand, but they also remain better able to generate ideas and retain information. “When we write, a unique neural circuit is automatically activated,” said Stanislas Dehaene, a psychologist at the Collège de France in Paris. “And it seems that this circuit is contributing in unique ways we didn’t realize,” he continued. A 2012 study led by Karin James, a psychologist at Indiana University, lent support to that view. The researchers found that the initial duplication process mattered a great deal. By contrast, children who typed or traced the letter or shape showed no such effect. Dr. Dr.

The Tragic Triumph Of The MBAs “We’ve seen Mubarak fall,” said Salesforce’s Marc Benioff of the corporate need to focus on social networks at the recent Dreamforce conference. “We’ve seen Khadafy fall. When will the first CEO fall for the same reason?” What a fantastic comparison! Benioff isn’t a bad guy, it was just a dumb thing to say — but it’s stuck in my mind, because Salesforce, cloud-computing’s poster child, is the future, and his seems to be the voice of the zeitgeist. And it seems that whatever survives the ongoing Mountain View bloodbath will be thoroughly monetized. Is this the right thing for Google to do? Nope. I suspect this is pretty common among CEOs and MBAs — but most techies don’t agree at all. Image credit: Paul G, Flickr.

Step 1: What is a PLN? Welcome to our professional learning series on building a PLN. This series guides you step by step through the process of setting up your own PLN. The aim of this first step is to: Explain what is a PLN.Help you understand why educators create their own PLN. The following information on PLN was co-written by Michael Graffin, a relief/substitute teacher and blogger from Western Australia. You can check out Michael’s original “What the heck is a PLN” post here. What is a PLN? The word “PLN” stands for “Personal Learning Network”, and it has its origins in connectivism theory (Siemens, G. & Downes, S., 2005). Why you should begin your own PLN —Ashley Azzopardi (@ashleyazzopardi) Let’s take this a little further… The Personal: Having a PLN is about making connections and building personal relationships with teachers, school administrators, university professors, and experts around the world. The Learning: Having a PLN is about sharing ideas and resources, collaboration, and learning. Your Task

SCHOPENHAUER'S 38 STRATAGEMS, OR 38 WAYS TO WIN AN ARGUMENT Arthur Schopenhauer (1788-1860), was a brilliant German philosopher. These 38 Stratagems are excerpts from "The Art of Controversy", first translated into English and published in 1896. Carry your opponent's proposition beyond its natural limits; exaggerate it. The more general your opponent's statement becomes, the more objections you can find against it. (abstracted from the book:Numerical Lists You Never Knew or Once Knew and Probably Forget, by: John Boswell and Dan Starer) The Power of the Doodle: Improve Your Focus and Memory Long dismissed as a waste of time, doodling is getting new respect. Recent research in neuroscience, psychology and design shows that doodling can help people stay focused, grasp new concepts and retain information. A blank page also can serve as an extended playing field for the brain, allowing people to revise and improve on creative thoughts and ideas. Doodles are spontaneous marks that can take many forms, from abstract patterns or designs to images of objects, landscapes, people or faces. "It's a thinking tool," says Sunni Brown, an Austin, Texas, author of a new book, "The Doodle Revolution." Doodling in meetings and lectures helps ease tension for Samantha Wilson, a high-school teacher and graduate student from Southborough, Mass. "It looks like I'm spacing out when I'm doodling, but I'm actually making my thoughts come together, solidifying my own ideas," Ms. Jesse Prinz draws people's heads to help himself pay attention during lectures and speeches at conferences he attends.

Groundbreaking Research Methods and Skills for the Human Sciences and Humanities Palo Alto, CA (PRWEB) August 26, 2011 A new book by professors of Transpersonal Psychology at the Institute of Transpersonal Psychology offers research methods and skills from the field of transpersonal psychology. "Transforming Self and Others Through Research", released this month by SUNY Press, offers transformative approaches to those conducting research across the human sciences and the humanities. As co-author Dr. Rosemarie Anderson explains, “These research approaches can be transformative for researchers, participants, as well as the audience of a project.” In hundreds of empirical studies conducted since the release of their first book, Transpersonal Research Methods for the Social Sciences, in 1998, these methods have been tested and integrated with qualitative, quantitative and mixed-method research designs. Anderson and Braud invite scholars to bring multiple ways of knowing and personal resources to their scholarship. About the Institute of Transpersonal Psychology

Text expander for Windows - Breevy Why type slower... when you can type faster? Breevy is a text expander for Windows that helps you type faster and more accurately by allowing you to abbreviate long words and phrases -- saving you time and money. Simply define an abbreviation for a longer piece of text, like eml for JohnDoe@email.com. Then, in the future, instead of typing that longer piece of text, type the abbreviation you associated with that text in any application, and Breevy will automatically replace it for you, instantly. Is it easy to use? Yes! Think of a word or phrase that you often type or find cumbersome to type or remember -- your address, an e-mail signature, a complex word, etc. Breevy is extremely fast, easy to use, can replace your typed abbreviations in any application, is unobtrusive, has lots of cool features (including Dropbox sync support), can import and sync with your TextExpander snippets, and will start increasing your productivity within the first five minutes you use it. Perfect for... you.

handwriting tips You’ve decided you want to improve your handwriting and you’re probably hoping a fountain pen will do the trick -- maybe a friend told you it would. Maybe you’re just adventurous and you want to try your hand at calligraphy (or you might, once your handwriting improves). Good for you! A fountain pen may make your writing look a bit better, but if your writing looks as if frenzied chickens got loose on the page, chances are this won’t be enough. Most likely, you’ll need to retrain your arm and hand. After coaching handwriting and teaching calligraphy over the years, I’ve learned to see the characteristics of those who’ll be able to pick up the necessary motions quickly from those who’ll have to work a bit harder. Crampy, uneven letters are often the result of drawing the letters with the fingers rather than using the whole arm to write. People who inevitably have trouble with handwriting and calligraphy write with their fingers. It will take time to re-train muscles and learn new habits.

Be lucky - it's an easy skill to learn Take the case of chance opportunities. Lucky people consistently encounter such opportunities, whereas unlucky people do not. I carried out a simple experiment to discover whether this was due to differences in their ability to spot such opportunities. I gave both lucky and unlucky people a newspaper, and asked them to look through it and tell me how many photographs were inside. On average, the unlucky people took about two minutes to count the photographs, whereas the lucky people took just seconds. For fun, I placed a second large message halfway through the newspaper: "Stop counting. Personality tests revealed that unlucky people are generally much more tense than lucky people, and research has shown that anxiety disrupts people's ability to notice the unexpected. The experiment was then repeated with a second group of people, who were offered a large financial reward for accurately watching the centre dot, creating more anxiety.

Human rights: Homophobia feels like a disease Dear Editor, Why is it that when a man with courage of his convictions like John Cummins speaks his mind, he is really lambasted in the press and on the radio? If a person dares speak up and says that homosexuality is unnatural and an abuse of the natural use of sex, he is subject to all kinds of abuse. Is the truth not allowed any more, or are we all supposed to be politically correct and bow to public pressure? The term homophobic makes us to feel that we are suffering from a disease. I am not proposing that gays be abused, either physically or verbally, but dont try to tell us that its just an alternate lifestyle. Even electricity needs a male and a female plug to connect the circuit. David J. © Langley Advance