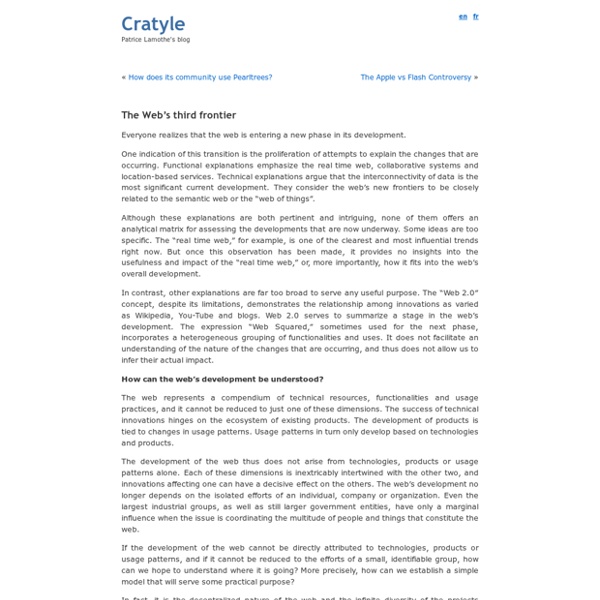 Everyone realizes that the web is entering a new phase in its development. One indication of this transition is the proliferation of attempts to explain the changes that are occurring. Functional explanations emphasize the real time web, collaborative systems and location-based services. Technical explanations argue that the interconnectivity of data is the most significant current development. They consider the web’s new frontiers to be closely related to the semantic web or the “web of things”. Although these explanations are both pertinent and intriguing, none of them offers an analytical matrix for assessing the developments that are now underway. In contrast, other explanations are far too broad to serve any useful purpose. How can the web’s development be understood? The web represents a compendium of technical resources, functionalities and usage practices, and it cannot be reduced to just one of these dimensions. The founding principles The two initial phases of growth

Education Technology - theory and practice: Pearltrees for teachers Year 2012 last post is a guest post from Finnish teacher Tommi Viljakainen. He is a teacher in Elimäki lower and upper secondary school. He teaches English, French and P.E. He is also interested in social media, iPad and the future of education. You can find Tommi also in Twitter under name @tommiviljaA (Finnish) teacher's dive into social media - "I discovered pearls in Pearltrees!"Tips for teachersThis time I thought I could write about Pearltrees from a teacher's perspective.

Pearltrees Raises $6.7M For Its “Collaborative Interest Graph” Pearltrees, a company offering a novel interface for sharing and finding content, has raised 5 million euros ($6.7 million US) in new funding. The basic unit of the Pearltrees service is the pearl, which is basically a bookmark. Users can assemble these pearls into trees based around a topic. blog Yesterday, Yahoo announced their intention to shut down Delicious. It is a sad piece of news. Delicious has been a great source of inspiration to us and a major contribution to the possibility of a humanly organized web.

» Biography / noahstape.com From Noah’s Tape unspools the inevitable, intimate product of a journey across physical and emotional borders. Alternately tender, corrosive and raw, Noah’s Tape spans and spills from one musical auteur’s odyssey across continents, culture and meaning. Fluently trilingual and of French-Thai descent, Jessica Chalisa Nay has been distilling affliction and bliss through the language of beats, boards and strings since age 16. Nay’s experimentation and continental drift from France and the US to the Far East culminated in the launch of a live act in 2011. Since then Noah’s Tape has earned critical regard and captured audiences at music festivals, concerts and clubs in and around the international hub of Bangkok, Thailand. Obsessively focused on the minutiae of composition, production and stage craft, Nay sees Noah’s Tape as exemplifying the technology-driven democratization of music, where Independence and self-ownership cultivate authentic, lucid expression.

7 Secrets of the Super Organized A few years ago, my life was a mess. So was my house, my desk, my mind. Then I learned, one by one, a few habits that got me completely organized. Am I perfect? Pearltrees: Slick Social Bookmarking and Curation Tool Now on iPad WHAT: A web-based and iPad application to organize and curate your social life online. Users collect, or bookmark, web pages, tweets, Google+ posts and more, and arrange them in pearls or pearltrees. A pearl holds anything interesting you find on the web with a URL. A pearltree is a collection of webpages that functions like a folder. On the iPad, you simply organize your pearls by touching and dragging. blog With Pearltrees you were already organizing what you like on the web? Now it gets even faster, but also customizable and more practical! So, what’s new ?

The Best Industries for Starting a Business - Best Small Businesses - Start a Business While a sure thing is rarity in entrepreneurship, there are certainly smart bets and calculated moves. In Inc. magazine’s annual look at the best industries for starting a business the goal was to seek out and highlight the industries that are primed for new opportunity. From green construction to baby products and translation services, these industries may not be the hippest or edgiest around, but they are consistent and making solid gains. In effect, they're the industries that keep on giving. And in these days of economic fits and starts, that’s a quality that can't be oversold. As companies continue to mechanize their operations, they're investing big time in heavy-duty machinery.

Rumsey Historical Map Collection The David Rumsey Map Collection was started over 25 years ago and contains more than 150,000 maps. The collection focuses on rare 18th and 19th century maps of North and South America, although it also has maps of the World, Asia, Africa, Europe, and Oceania. The collection includes atlases, wall maps, globes, school geographies, pocket maps, books of exploration, maritime charts, and a variety of cartographic materials including pocket, wall, children's, and manuscript maps. Items range in date from about 1700 to 1950s. Digitization of the collection began in 1996 and there are now over 55,000 items online, with new additions added regularly. Pearltrees makes Web curation a joy with its 'magical' new iPad app Not many tech CEOs would have the guts to describe their products as “magical” and as delivering “pure happiness”, but that’s exactly how Pearltrees‘ Patrice Lamothe describes the startup’s iPad app released today. You know what? He may just be right. Pearltrees is a service that takes a visual approach to Web curation. Launched late last year with its browser-based version, it allows you to create networks of ‘pearls’ on screen. Each pearl is a link to a piece of content and you can connect them together in whatever way you choose into a ‘pearltree’.

Content Curation for Teachers  Have you ever felt that there is simply too much interesting, educational content on the web? Fortunately, there are also some great, free products that help learners curate all of the many things they can read, watch, hear etc. on the web. The beauty of taking control of your content by saving and organizing links is that you can quickly find, revisit or share content with others. By curating the web, one can essentially build up a library of data in the cloud for free. I know personally as a history teacher, I spend a lot of time surfing the web when I prepare lessons. Falles City hall falla for 2014. The Falles (Valencian: [ˈfaʎes] ( ), sing. Falla), or Fallas (Spanish: [ˈfaʎas]),[1] is a traditional celebration held in commemoration of Saint Joseph in the city of Valencia, in Spain. The term Falles refers to both the celebration and the monuments created during the celebration. A number of towns in the Valencian Community have similar celebrations inspired by the original one in Valencia.

What an Effective Teacher's Classroom Looks Like Another school year is approaching and many novice teachers are preparing to enter their own classrooms for the first time. To help them on their way, MiddleWeb is publishing a series of brief articles offering good advice and food for thought. What We See in Effective and Ineffective Classrooms by Annette Breaux and Todd Whitaker

Pearltrees Brings Your Interest Graph' to the iPad One of the more buzzword-y buzzwords in Silicon Valley right now is the "interest graph," which is supposed to connect people and the topics that they're interested in. Lots of startups promise to tap into the interest graph, but Pearltrees CEO Patrice Lamothe says a new app from his startup is "maybe the first time you actually see an interest graph." The new feature, which Lamothe variously describes as "visual discovery" (his pitch to the tech press) and "related interests" (what it's actually called in the app), is included in the just-launched iPad application from the previously Web-only company.