Music.columbia.edu/cmc/courses/g6610/fall2012/week4/Gendy3.pdf. Www.gustavodiazjerez.com/Gustavo_Diaz_Jerez_DMA_Thesis_MSM.pdf. Introduction to Randomness, Chance, and Stochastic Composition « EarSketch. When musicians use computers to make music, they often do so because they want complete and precise control over the music they create. 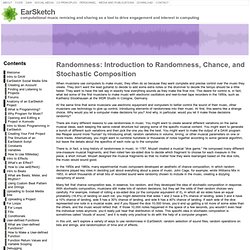 They don’t want the lead guitarist to decide to add some extra notes or the drummer to decide the tempo should be a little faster. They want to have the last say in exactly how everything sounds as they make the final mix. This desire for control is, in fact, what led some of the first musicians to make music with electronic oscillators and reel-to-reel tape recorders in the 1950s, such as Karlheinz Stockhausen at the WDR Studio in Cologne, Germany. At the same time that some musicians use electronic equipment and computers to better control the sound of their music, other musicians use technology to give up control, introducing elements of randomness into their music. At first, this seems like a strange choice. Stochastic Music  (aka Stochastism, Stochasticism) - Music Genres. Stochastic music is method of composition in 20th century classical music developed by Iannis Xenakis and described in his book Formalized Music. 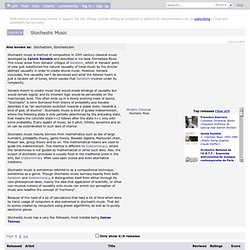 This music arose from Xenakis' critique of Serialism, which in Xenakis' point of view just substituted the natural causality of tonal music by the stricter abstract causality in order to create atonal music. However, Xenakis concludes, this causality can't be perceived and what the listener hears is just a random set of tones, which causes that Serialism crushes under its complexity. Xenakis meant to create music that would evade bindings of causality but would remain logical, and its inherent logic would be perceivable on the macroscopic level. This often ends up in a slowly evolving mass of sound. "Stochastic" is term borrowed from theory of probability and Xenakis describes it as "an asymptotic evolution towards a stable state, towards a kind of goal, of stochos". Stochastic music has a very few followers, most notable being James Tenney. 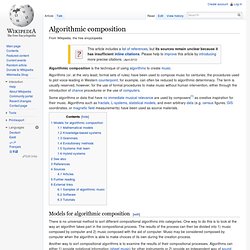 Algorithms (or, at the very least, formal sets of rules) have been used to compose music for centuries; the procedures used to plot voice-leading in Western counterpoint, for example, can often be reduced to algorithmic determinacy. The term is usually reserved, however, for the use of formal procedures to make music without human intervention, either through the introduction of chance procedures or the use of computers. Some algorithms or data that have no immediate musical relevance are used by composers[1] as creative inspiration for their music. 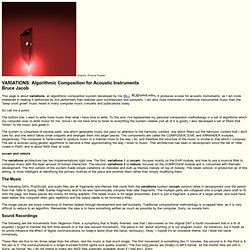 It produces scores for acoustic instruments, as I am more interested in hearing it performed by live performers than realized upon synthesizers and samplers. I am also more interested in traditional instrumental music than the "beep snort growl" music heard in many computer music concerts and publications today. So call me a purist. The bottom line: I want to write more music than what I have time to write.

The system is comprised of several parts: one which generates music but pays no attention to the harmonic content, one which filters out the harmonic content that I don't care for, and one which takes small snippets and arranges them into larger pieces. The History of Algorithmic Composition. Dmitri Tymoczko, Composer and Music Theorist. Systems. “Composers are now able, as never before, to satisfy the dictates of that inner ear of the imagination. 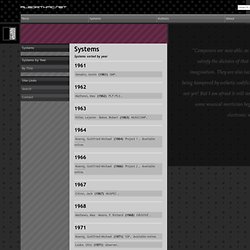 They are also lucky so far in not being hampered by esthetic codification -- at least not yet! But I am afraid it will not be long before some musical mortician begins embalming electronic music in rules.” “... the use of numerical machines no longer stands in need of justification. It is not a mystery. If there is a mystery, it is in the mental structures of music and not in the computers, which are only tools, extensions of the hand and the slide rule.” “With the development of electronic and computer music, multidemnsionality of sound representation turned out to be both natural and useful. “The computing machine is a marvelous invention and seems almost superhuman. “The danger is great of letting oneself be trapped by the tools and of becoming stuck in the sands of technology that has come like an intruder into the relatively calm waters of the thought in instrumental music.” Procedural music generation techniques.