Getting started with stage video. Stage video may not be available when your SWF file is instantiated, but it may become available at some time later. 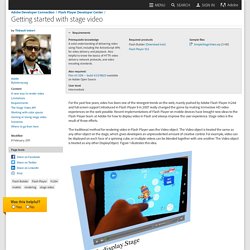 You may ask, why? As I explained before, the wmode value you will choose when integrating your SWF file will determine the stage video consistency across browsers. In some scenarios, you may not have the ability to set wmode="direct"—for integration reasons in the HTML page, for instance. Also, in full-screen mode, as Flash Player does not run in the browser context, stage video will always be available regardless of the wmode value. But note that when leaving full-screen mode, stage video may then become unavailable again, placing your SWF file back in the browser context, impacted by the wmode parameter. How can I get low level access to netstream usi... Ok, I finally got access to the direct netstream object - someone from Akamai gave me the answer. 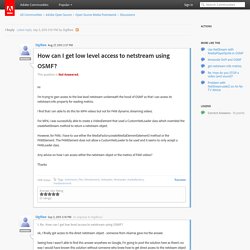 Seeing how I wasn't able to find this answer anywhere on Google, I'm going to post the solution here as there's no way I would have known this solution without someone who knew how to get direct access to the netsteam object in OSMF. Quick Tip: OSMF VideoPlayer Screenshot at Jozef Chúťka's blog. Understanding GPU Rendering in Adobe AIR for Mobile. By properly leveraging GPU rendering, you can effectively increase the performance of your Flash games and AIR applications, achieving higher frame rates than you would using CPU render mode. 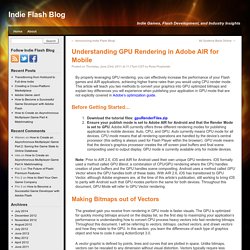 This article will teach you two methods to convert your graphics into GPU optimized bitmaps and explain key differences you will experience when publishing your application in GPU mode that are not explicitly covered in Adobe’s optimization guide. Before Getting Started… Download the tutorial files: gpuRenderFiles.zipEnsure your publish mode is set to Adobe AIR for Android and that the Render Mode is set to GPU.

Adobe AIR currently offers three different rendering modes for publishing applications to mobile devices: Auto, CPU, and GPU. Auto currently means CPU mode for all devices. Making Bitmaps out of Vectors The greatest gain you receive from rendering in GPU mode is faster visuals. A vector graphic is defined by points, lines and curves that are plotted in space. ExternalInterface in Chrome. Smoothing with OSMF: Harder Than You’d Think. There’s one deployment scenario for using smoothing in OSMF that’s really easy. 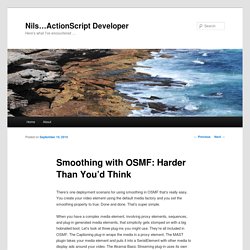 You create your video element using the default media factory and you set the smoothing property to true. Done and done. That’s super simple. When you have a complex media element, involving proxy elements, sequences, and plug-in generated media elements, that simplicity gets stomped on with a big hobnailed boot. How can I grab a frame from the NetStream? As far as I know, there is no way to get a screen grab directly from a NetStream . 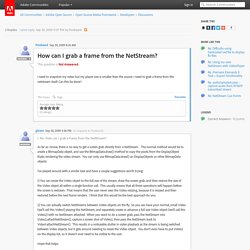 The normal method would be to create a BitmapData object, and use the BitmapData.draw() method to copy the pixels from the DisplayObject thatis rendering the video stream. You can only use BitmapData.draw() on DisplayObjects or other BitmapData objects. I've played around with a similar task and have a couple suggestions worth trying: 1) You can resize the Video object to the full size of the stream, draw the screen grab, and then restore the size of the Video object all within a single function call. This usually means that all three operations will happen before the screen is redrawn. 2) You can actually switch NetStreams between Video objects on the fly. Hope that helps. Pause Streaming Video.

AS3 Optimization. Introduction: An AS3 module I was working on was eating up memory, and a FLVPlayback video was having some trouble playing occasionally, so I decided to track what was happening and systemically improve performance. 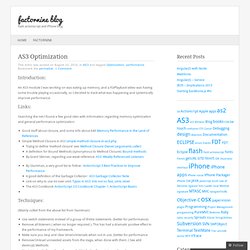 Links: Searching the net I found a few good sites with information regarding memory optimization and general performance optimization: Trace from the browser, using standard trace() Added Vista infoUpdated the path to flashlog.txt for LinuxSplit Step 4 into two stepsAdded optional OSX step for creating aliases Added Linux infoChanged mm.cfg file location for Windows 2000Made corrections to Step 4 As of Flash Player version 9,0,28,0, the default location of flashlog.txt has changed and cannot be modified Changed the property order in mm.cfg The original order would sometimes change the name of the flashlog on mac.Changed MaxWarnings from 100 to 0 This allows an unlimited number of error messages to be written to the flashlog.Changed which tail software I recommend for Windows I have settled on the tail that is included with Windows Server 2003 Resource Kit Tools. 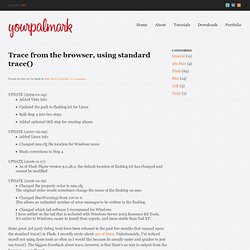 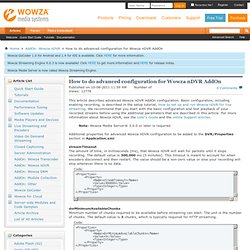 Basic configuration, including enabling recording, is described in the setup tutorial, How to set up and run Wowza nDVR for live streaming. We recommend that you start with the basic configuration and test playback of your recorded streams before using the additional parameters that are described in this article. How to fix OSMF 2.0 to work correctly with non-zero starttimes. Published on 01-10-2013 01:32 PM Number of Views: 2647. 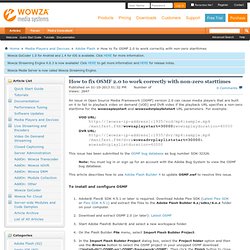