Generator.x: Software and generative strategies in art and design 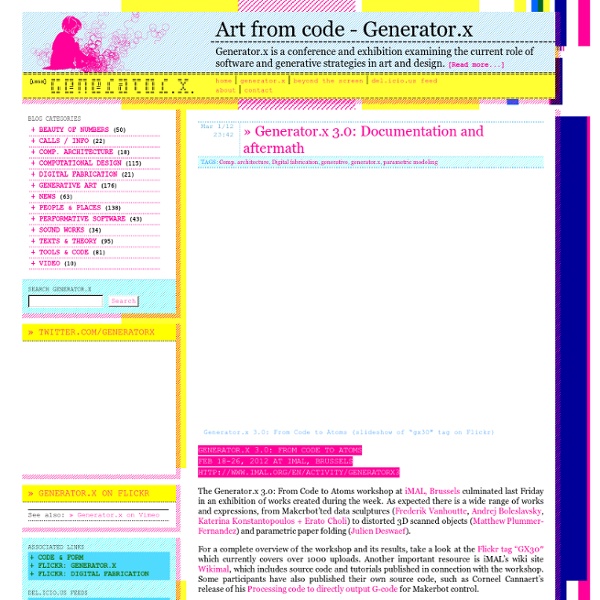 Generative Machines by Michael Chang (@mflux) / #threejs #javascript #webgl A few months ago Michael Chang at Google Creative Labs was asked to make some visuals for Google IO, building on from the procedural circuit-board diagrams he did in the past. After spending few weeks experimenting in both Three.js and Processing, he gravitated towards one concept – the idea of a procedural exploding view diagram of “Generative Machines”. It wasn’t enough that I simply had rivets and slots coming together, I also wanted to make an overall structure that looked as if, when assembled, became a machine that forms a whole that was more than the sum of its parts.This got me thinking about creating procedural shapes that I can cut up. My first exploration into this was creating a one dimensional exploding axis, where elements can fly forward or back, and adding a radial dimension where elements could be chopped up and exploded outwards. The result is a collection of self-assembling machines which live on a skeleton. Generative Machines via Cedric Kiefer

Andrew Vande Moere Homepage Generator.X blog » Sound works The early-to-mid 1990’s were an interesting time. “Multimedia” was a hot buzzword, and people were wondering if CD-ROM and Internet was here to stay. Macromedia Director ruled the world of interactive graphics, and World Wide Web and HTML was finally transforming the Internet into a visual environment. Early experiments using the web for art purposes quickly became iconic: Jodi hacked HTML, Form Art was briefly defined as a genre, Net.art considered ironic approaches to art production via this new channel and artists like Stanza explored Director as a tool for generative graphics. During this (golden) period, Vienna was a hotbed of experimentation. Among this loosely affiliated group were artists like Farmers Manual, Tina Frank, Monoscope, Pure, Lia and Dextro. Early pioneers of generative Director programming, Lia and Dextro quickly became influential both inside and outside the Director community. The original Turux.org is now offline for good, having been replaced by a placeholder.

CONT3XT.NET marianne: Context Free software Generative art made by Leonel Cunha with Context Free :www.contextfreeart.org Context Free is a program that generates images from written instructions called a grammar. The program follows the instructions in a few seconds to create images that can contain millions of shapes. Chris Coyne created a small language for design grammars called CFDG. These grammars are sets of non-deterministic rules to produce images. Stuff & Things Paris MFA’s Samurais Somerville does fountains A construction worker’s hat The entire city of shanghai in GIANT model form, updated monthly. Escalators are so amazing The ceiling. InfraBodies - memes from the intersection of art, technology, and experience design Context Free Art Emergence In philosophy, systems theory, science, and art, emergence is a process whereby larger entities, patterns, and regularities arise through interactions among smaller or simpler entities that themselves do not exhibit such properties. Emergence is central in theories of integrative levels and of complex systems. For instance, the phenomenon life as studied in biology is commonly perceived as an emergent property of interacting molecules as studied in chemistry, whose phenomena reflect interactions among elementary particles, modeled in particle physics, that at such higher mass—via substantial conglomeration—exhibit motion as modeled in gravitational physics. Neurobiological phenomena are often presumed to suffice as the underlying basis of psychological phenomena, whereby economic phenomena are in turn presumed to principally emerge. In philosophy, emergence typically refers to emergentism. In philosophy[edit] Main article: Emergentism Definitions[edit] Strong and weak emergence[edit]

Vague Terrain | Digital Art / Culture / Technology Tools Processing Processing is an open source programming language and environment for people who want to create images, animations, and interactions. Initially developed to serve as a software sketchbook and to teach fundamentals of computer programming within a visual context, Processing also has evolved into a tool for generating finished professional work. Today, there are tens of thousands of students, artists, designers, researchers, and hobbyists who use Processing for learning, prototyping, and production. OpenFrameworks Openframeworks is a c++ library designed to assist the creative process by providing a simple and intuitive framework for experimentation. Cinder Cinder provides a powerful, intuitive toolbox for programming graphics, audio, video, networking, image processing and computational geometry. vvvv vvvv is a graphical programming environment for easy prototyping and development. MaxMSP/Jitter