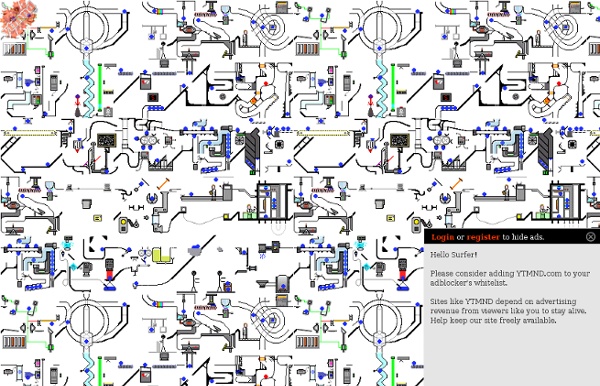 100 Websites You Should Know and Use In the spring of 2007, Julius Wiedemann, editor in charge at Taschen GmbH, gave a legendary TED University talk: an ultra-fast-moving ride through the “100 websites you should know and use.” Six years later, it remains one of the most viewed TED blog posts ever. Time for an update? We think so. Below, the 2013 edition of the 100 websites to put on your radar and in your browser.

Rotational illusion Rotating illusion "Rotating snakes" Circular snakes appear to rotate 'spontaneously'. Copyright A.Kitaoka 2003 (September 2, 2003) Explanation (PDF file) Robot vs Badger – Finding the weird and interesting so you don't have to! Do not stand at my grave and weep Do Not Stand at My Grave and Weep is a poem written in 1932 by Mary Elizabeth Frye. Although the origin of the poem was disputed until later in her life, Mary Frye's authorship was confirmed in 1998 after research by Abigail Van Buren, a newspaper columnist.[1] Full text[edit] Do not stand at my grave and weep, I am not there; I do not sleep. I am a thousand winds that blow, This doesnt exist Donate Login Remember Me 47 Mind-Blowing Psychology-Proven Facts You Should Know About Yourself I’ve decided to start a series called 100 Things You Should Know about People. As in: 100 things you should know if you are going to design an effective and persuasive website, web application or software application. Or maybe just 100 things that everyone should know about humans! The order that I’ll present these 100 things is going to be pretty random. So the fact that this first one is first doesn’t mean that’s it’s the most important.. just that it came to mind first.

8 Things to Stop Doing Right Now The main purpose of this site is to help you be who you want to be and live the life you want to live. I think everyone deserves that at the bare minimum, and I believe that everyone can achieve it. Therefore, a lot of the messages that I share here are positive, inspiring and action orientated. With this post I want to change direction, and not cover the things you should be doing, but the things you shouldn't be doing. I'm not even going to be half-hearted about it and say you should 'probably' stop doing these things or 'you can if you want'. No; you really should stop, right now.

Inspiring Movies » Life-Changing Arts Before you look at the selected movies, please understand that this is by no means 'the ultimate list of inspiring movies'. Creating such a list is impossible. What inspires one person, might leave another stone cold, what is life-changing to one, might be no more than amusing to someone else. The below selection of movies is meant to grow and expand with time, while aknowledging exceptional movies at all times - at least those we thought or felt were exceptional, either because of their profound message, the "think differently" factor, or perhaps just as an illustration of an exceptional approach to life. Click on any movie to find out more about it and see movie clips, where available. If you think there is a movie that should be added, by all means, let us know which, and why.

60 Inconvenient Personal Development Truths I know you want to be the best you can be. We all do. But sometimes we look for success in the wrong places or we try to achieve it in the wrong ways. Here are 60 inconvenient truths about personal development to help you stay on track. The acquisition of knowledge doesn’t mean you’re growing.