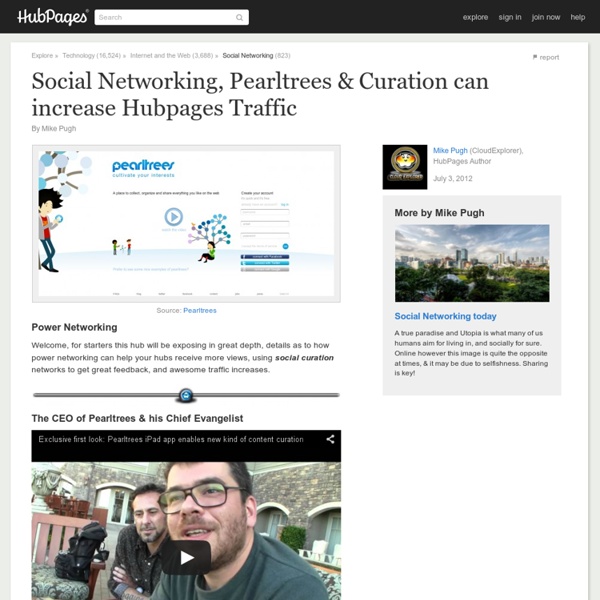 How do the Numbers Add up Statistically here, using Pearltrees I've increased my traffic levels here, using Pearltrees significantly, in the short 5 months I've been a writer for hubpages. This form of social sharing is definitely going to change how you view the web, entirely, and this sharing actually will make hubpages much more popular, once more people catch on to the sharing on Pearltrees as well. I shared my hubs 100+ times on Pearltrees the first week, & I track the stats on both Google Analytics for Hubpages traffic, as well as on Hubpages for pearl stats. Sharing Amongst the social community of Pearltrees Pearltrees is amazing when it comes to sharing hubs, web locations, or any other content that has a URL (web address). There's a Bookmarklet that helps users to pearl as they browse web locations, and its done super fast, since the plugin tool gets embedded into your web browser, shown in the image below.

Why Social Beats Search That's a controversial post headline and I don't mean that social will always beat search, but there's a rising chorus out there about "content farms" and search optimized content creation that is worth touching on. Arrington started it when he posted about "the end of hand crafted content". Richard MacManus penned a similar post the same day called "Content Farms: Why Media, Blogs, and Google should be worried". When a web service like Google controls a huge amount of web traffic (>50% for many sites), it's going to get spammed up. What's worse, and what Mike and Richard are talking about, is the act of search engine driven content creation. I left this comment at the end of a very long comment thread on Arrington's post: social tools will allow us to decide what is crap and what is not. our social graphs will help us. search engines won’t. it’s a lot harder to spam yourself into a social graph. The Internet is a massive content creation machine.

Sweden: File-Sharing Recognized As A Religion The Church of Kopimism, whose principal tenent is the right to file-share, has been formally recognized as a religious organization in Sweden. The Swedish government agency Kammarkollegiet registered the Church of Kopimism as a religious organization in late December, just before Christmas, the group said in a Wednesday statement. Members of the church applied three times in their more than year-long quest to have the religion formally recognized in Sweden. Sweden is now the first and only country to recognize Kopimism as a religion, the group said. "For the Church of Kopimism, information is holy and copying is a sacrament," it said in a statement. Philosophy student Isak Gerson, spiritual leader and founder of the Church of Kopimism, said being recognized by Sweden is a big step towards removing the stigma around copying. "Hopefully, this is one step towards the day when we can live out our faith without fear of persecution," Gerson said in a statement.

Pearltrees On The Internet map The map of the Internet Like any other map, The Internet map is a scheme displaying objects’ relative position; but unlike real maps (e.g. the map of the Earth) or virtual maps (e.g. the map of Mordor), the objects shown on it are not aligned on a surface. Mathematically speaking, The Internet map is a bi-dimensional presentation of links between websites on the Internet. Every site is a circle on the map, and its size is determined by website traffic, the larger the amount of traffic, the bigger the circle. Users’ switching between websites forms links, and the stronger the link, the closer the websites tend to arrange themselves to each other. Charges and springs To draw an analogy from classical physics, one may say that websites are electrically charged bodies, while links between them are springs. Also, an analogy can be drawn from quantum physics. Anyway, the real algorithm of plotting The Internet map is quite far from the analogies given above. Semantic web The Internet Phenomenon

‘Friends’ can share your Facebook profile with the government, court rules A federal judge has ruled that investigators can go through your Facebook profile if one of your friends gives them permission to do so. The decision, which is part of a New York City racketeering trial, comes as courts struggle to define privacy and civil liberties in the age of social media. In an order issued on Friday, US District Judge William Pauley III ruled that accused gangster Melvin Colon can’t rely on the Fourth Amendment to suppress Facebook evidence that led to his indictment. Colon had argued that federal investigators violated his privacy by tapping into his profile through an informant who was one of this Facebook friends. The informant’s Facebook friendship served to open an online window onto Colon’s alleged gangster life, revealing messages he posted about violent acts and threats to rival gang members. Judge Pauley III’s ruling is significant because it is the latest in a series of cases that defines how and when police can search social media.

Survey Reveals Social Media Demographics A massive survey of internet users reveals trends in social media usage across numerous platforms, ages, races, genders, population density and more. Which social media sites should you be focusing on for YOUR target market? The Pew Research Center has released the results of a comprehensive social media survey, conducted over several years to evaluate which demographics were using social media, and on which platforms. Which social networking sites emerged on top? Of the online adults surveyed at the end of 2012: 67% use Facebook 20% use LinkedIn 16% use Twitter 15% use Pinterest 13% use Instagram 6% use Tumblr A decent amount of Americans appear to be using social media, but which demographics use social media in greater numbers? It appears that women use social media 9% more than men do, at a whopping rate of 71%. When it comes to age, social media usage has regularly been divided on a sliding scale, with consistently less social networking activity as age increases.