Pearltrees Brings Your Interest Graph' to the iPad 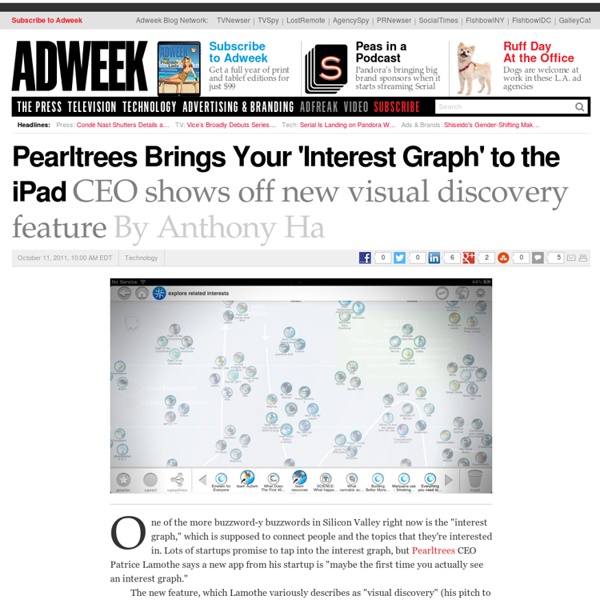 One of the more buzzword-y buzzwords in Silicon Valley right now is the "interest graph," which is supposed to connect people and the topics that they're interested in. Lots of startups promise to tap into the interest graph, but Pearltrees CEO Patrice Lamothe says a new app from his startup is "maybe the first time you actually see an interest graph." The new feature, which Lamothe variously describes as "visual discovery" (his pitch to the tech press) and "related interests" (what it's actually called in the app), is included in the just-launched iPad application from the previously Web-only company. Related interests have also been added to the Pearltrees website, but Lamothe is clearly more excited by the iPad version—he warned that the Web experience probably isn't quite as good. That kind of self-deprecation from a startup CEO is a little strange, except that the Pearltrees iPad app is pretty impressive.

Curation Startup Says It Captures 10,000 Links a Day French startup Pearltrees offers a very unique interface for organizing and sharing collections of links from around the web. Tomorrow the company will release a new, faster version of its application and announce that it has passed 2 million links curated in 7 months since going live. That means an average of 10,000 links have been bookmarked in Pearltrees every day since launch, and presumably many more now that the site has grown. Pearltrees makes Web curation a joy with its 'magical' new iPad app Not many tech CEOs would have the guts to describe their products as “magical” and as delivering “pure happiness”, but that’s exactly how Pearltrees‘ Patrice Lamothe describes the startup’s iPad app released today. You know what? He may just be right. Pearltrees is a service that takes a visual approach to Web curation. Launched late last year with its browser-based version, it allows you to create networks of ‘pearls’ on screen. Each pearl is a link to a piece of content and you can connect them together in whatever way you choose into a ‘pearltree’.

Social Bookmarking And Curation: Pinterest, Pearltrees, GimmeBar Quote of the Day: "I get ideas about what to buy for others for the holidays from websites with best of lists (like top ten gifts for mom).” –Male, 27, CA Trolls, bullies, flame wars—comment sections online have them all. Is the solution simply to turn off the comments? What the heck is an interest graph? Pearltrees raises $6.6M to show us Social curation startup Pearltrees has just sealed a deal for €5 million (around $6.6 million), all in the name of creating a better interest graph. Much is being made in current social media circles of the “interest graph” concept, which is more about what you know than who you know, and which purportedly has strong connections to purchase intent and other matters of concern to online marketers. Put differently, while social networks like Facebook focus on what you have in common with your friends and how you react to friends’ recommendations, interest graph-based models (like the ones behind Pinterest, GetGlue or Foodspotting) make social connections based on shared interests, not the other way around. “Pearltrees has leveraged social curation to create an open and collaborative interest graph of the Web,” said Pearltrees CEO Patrice Lamothe in a release.

8 must-reads detail how to verify information in real-time, from social media, users Over the past couple of years, I’ve been trying to collect every good piece of writing and advice about verifying social media content and other types of information that flow across networks. This form of verification involves some new tools and techniques, and requires a basic understanding of the way networks operate and how people use them. It also requires many of the so-called old school values and techniques that have been around for a while: being skeptical, asking questions, tracking down high quality sources, exercising restraint, collaborating and communicating with team members. For example, lots of people talk about how Andy Carvin does crowdsourced verification and turns his Twitter feed into a real time newswire. Lost in the discussion is the fact that Carvin also develops sources and contacts on the ground and stays in touch with them on Skype and through other means. What you see on Twitter is only one part of the process.

Pearltrees: Slick Social Bookmarking and Curation Tool Now on iPad WHAT: A web-based and iPad application to organize and curate your social life online. Users collect, or bookmark, web pages, tweets, Google+ posts and more, and arrange them in pearls or pearltrees. A pearl holds anything interesting you find on the web with a URL. A pearltree is a collection of webpages that functions like a folder. Pearltrees on Wikipedia Pearltrees refers to itself as "a place for your interests".[8] Functionally the product is a visual and collaborative curation tool[9][10][11][12] that allows users to organize, explore and share any URL they find online as well as to upload personal photos, files and notes.[13] The product features a unique visual interface[14][15] that allows users to drag and organize collected URLs, and other digital objects.[16] that themselves can be further organized into collections and sub-collections,[17] (URLs). Users of the product can also engage in social/collaborative curation using a feature called Pearltrees Teams.[18] Pearltrees was founded by Patrice Lamothe, CEO,[22] Alain Cohen, CTO,[23] Nicolas Cynober, Technical Director,[24] Samuel Tissier, Ergonomy/UI[25] and Francois Rocaboy, CMO.[26] History[edit] Development of Pearltrees began in 2007. In July 2012 Pearltrees launched their iPhone app.

Pearltrees App: A Virtual Bookmarking Tool "Cultivate Your Interests" How many websites do you find, that actually let you do that in a glitch free manner? A handful probably. Pearltrees is one exception in this case. Founded in 2007 and launched in 2009 by Patrice Lamothe and others at Paris, the site instantly broke the record by having 10,000 registered users instantly. By 2012, the user community grew to as many as 1 million unique visitors per month. But what does Pearltrees exactly do? Pearltrees Raises $6.7M, Boasts Of “Collaborative Interest Graph” Pearltrees, a company offering a novel interface for sharing and finding content, has raised 5 million euros ($6.7 million US) in new funding. The basic unit of the Pearltrees service is the pearl, which is basically a bookmark. Users can assemble these pearls into trees based around a topic. Meanwhile, Pearltrees is using that data to determine how different topics and bookmarks are related, and allows users to find new pearls (related to whatever topic they’re exploring) through its “related interests” button. Following the lead from Google’s PageRank and Facebook’s EdgeRank, Pearltrees has named its technology TreeRank. In essence, it’s offering its own version of the “interest graph”, a goal that many startups are chasing.

There Is A Big Difference Posted by Tom Foremski - November 2, 2010 Curation is becoming an increasingly important term and for good reason: the online world is increasingly messy, muddled and full of blind alleys. Search used to be the best way to navigate online but today it is only one part of an Internet user's dashboard. Finding things is fine if you know what to look for, but search is increasingly less effective in judging the quality of links, or putting those links into a context. Blekko, the recently launched search engine tries to provide a context for search terms but it's still not curation but aggregation So what is curation?

When is the social curation bubble going to burst? You just can’t move for social curation services right now. The biggest noise might be coming from Pinterest, which is growing like a weed — but whether it’s the new-look Delicious, Switzerland’s Paperli, shopping curation site Svpply, image service Mlkshk or another site, the fact is that almost everybody seems to want to help you save and sort and share the things you find on the web right now. With this swirl of activity, then, it’s no surprise to hear that Parisian service Pearltrees — slogan “collect, organize, discover” — has just raised another $6 million of funding, led by local conglomerate Groupe Accueil. The company, which has been running in public since 2009, welcomed the injection of funds as a way to help expand and scale up its system for bookmarking and organizing, which is based around a clustered visual interface. And it needs that scale.

Content Curation Vs Content Aggregation Two posts brought to my attention the discussion starting to take root about the worlds of content aggregation versus content curation. A post on the Poynter blog back in early October points to the work of journalists engaging in curation via Twitter as a way of “filtering the signal from the noise.” The phrase used was “curation is the new aggregation.” A more recent post on the Simple-talk.com blog by Roger Hart delves more into the world of content curation in a broader sense, stating that it is a bit of a flavor-of-the-month. I would disagree with that sentiment, having discussed this for years. My experience with curation is more specific.