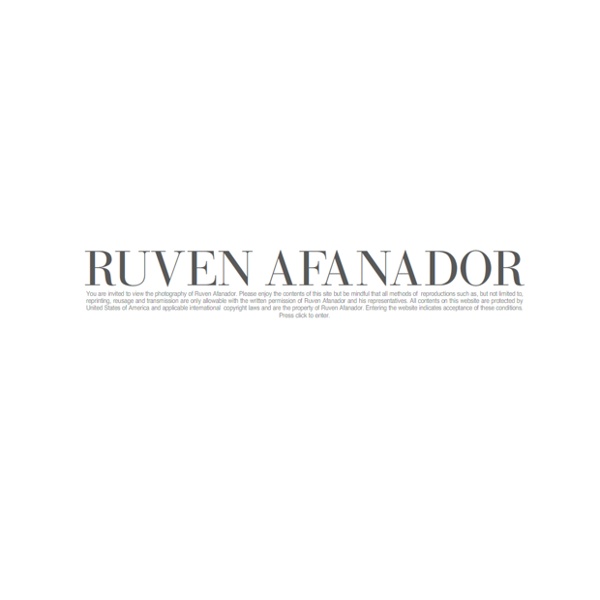 Tender photographs of traveller communities in Britain by Sandra Mickiewicz Photographer Sandra Mickiewicz has released a new body of work to celebrate and capture the spirit of traveller communities living in Britain today. The tender portraits of both young and old aim to break down stereotypes that are often associated with gypsies. "I want the audience to realise that the subjects I photograph are valuable members of society," says Sandra. Why Cashmere Is So Expensive I’m an award-winning photographer from the UK, and I recently spent two weeks living on the highest permanently inhabited plateau in the world to document the looming Cashmere crisis in the Himalayan ice desert. At an altitude of more than 14,000ft, where winter temperatures can fall to -40 degrees, it is hard to believe anyone or anything can survive in this vast ice desert that is the Changthang Plateau. More info: Instagram | andrewnewey.com Situated between the Himalayan and Karakorum mountain ranges, it is the highest permanently inhabited plateau in the world and home to an extremely hardy and rare breed of goat – the Changra, or Pashmina goat. The high altitude, freezing temperatures and harsh bitter winds in this unforgiving mountainous region are essential to stimulate the growth of the goats’ super-soft undercoat.

My Wife And I Want To Fundraise $100,000 In 2020 By Capturing Unique Photos Of Pets What was once a volunteer role at an animal shelter has turned into a pet photography company that aims to raise awareness about pet adoption as well as raise funds for rescue animals in need. Back in 2013, I was hired by the Humane Society of Broward County to manage its website redesign as well as the shelter’s social media as a full-time role. Once the website redesign was finished, the shelter asked if I could take on the photography program. Back then, photos of the adoptable animals were taken inside their kennel with flash and did not show them in the best light. 27 Designers Illustrate How Trendy People Look In Their Countries Groom+Style is a fashion and style blog that recently gave designers from all over the world a unique challenge. They were given generic headshots of a man and a woman and were asked to photoshop their looks to represent how trendy people look in their home countries. Even the organizers were surprised by the results. “While in Costa Rica, the emphasis on natural beauty means that the photos are hardly changed at all, the Belarusian designer turned the male photo into a suntanned action hero, complete with a cigar.

Trendland Online Magazine Curating the Web since 2006 Ben Zank pictures have all a similare thing in common: a kind of surrealism that mixes the unsettling, a feeling of danger and that something was going on just before and will continue afterwards. His self-portraits aim to stretch the viewer’s imagination and express his feelings when words fail. Ben images are often shown without faces, their visages disappearing into foliage or smoke, or otherwise, buried into the Earth. Instead of depending on the human face, Zank says that “the image itself is the emotion.” He says: ‘I didn’t go to school for photography.

Afghan Box Camera Project This film shows how Manawar Shah, a young carpenter in Kabul, builds a kamra-e-faoree. The film was shot in Kabul in 2012 and is about 9 minutes long. View online or download a printable version in size A5. Click here for the French version / Cliquer ici pour la version française. Amazing Graffiti Artist Turns A Block Wall Into A Bus (+15 More Transformations) Sergio Odeith, a 43-year-old Portuguese graffiti artist, impressed thousands of internet users this week when he posted his latest work of art on Instagram. In less than 7 hours since publication, the post had gotten almost 80,000 likes. As of this moment, it’s nearing 100,000 likes and still getting plenty more! Known for making extraordinary 3D drawings, this time the artist decided to use spray paint to transform a concrete block into an abandoned bus.

Joe Van Cleave's Blog: March 2015 Finally, the pieces have come together into a nearly completed project, after months of preparation, planning and building. I'm referring to the Instant Box Camera project; but there's been nothing instant about it. Last week, I completed staining the box and applying one coat of clear polyurethane, sufficient to call it ready for testing. This morning, I struggled with getting the black fabric arm sleeve and its wooden sewing ring clamps installed, with success found only after application of a rotary power tool to some tight spaces; anxious to begin testing the camera, I have not yet built or installed the final clamping plate over these rings.

Dandaka: Chapter four of Vasantha Yogananthan’s epic series A Myth of Two Souls – British Journal of Photography Mareecha’s Magic Trick Kattumannarkovil, Tamil Nadu, India, 2018, Black and white C-print hand-painted by Jaykumar Shankar “When you grow up in the West you have preconceptions, it was difficult to find a way to shoot India that wouldn't feel exotic or expected,” says Vasantha Yogananthan, who has recently published Dandaka, part four of his ambitious project, A Myth of Two Souls “Assume the form of a golden deer and lure Rama away.

Paolo Di Paolo’s unseen images from post-war Italy – British Journal of Photography Anna Magnani nella sua villa a San Felice Circeo (Roma), 1955. foto Paolo Di Paolo, © Archivio Paolo Di Paolo More than 250 archive photographs made in the 1950s and 60s will go on show in Rome this month Around 20 years ago, while rooting through her father’s cellar in search for a pair of skis, Silvia Di Paolo found a trunk containing 250,000 negatives, prints and slides. Aged 20 at the time, she had no idea that her father, Paolo Di Paolo, had been a photographer – let alone the top contributor to Il Mondo, one of Italy’s most popular current affairs magazines. Born in Larino, Southern Italy, in 1925, Paolo Di Paolo moved to Rome in the aftermath of the Second World War, hoping to become a photographer. He secured the job at Il Mondo in 1954, where he worked for 14 years contributing 573 photographs, from reportage in Japan, Iran and New York, to portraits of some of the biggest names in cinema and art.

The dad who gave birth: ‘Being pregnant doesn't change me being a trans man’ Freddy McConnell takes out his phone and shows me a film of his baby snoring contentedly. Jack is gorgeous, with blond hair, blue eyes and heavy eyelids, and McConnell is the classic doting dad – albeit more hands-on than most. It’s many months since he gave birth to Jack, an experience he describes as life-changing. He has also made an intimate and moving film about that experience, from the decision to have a baby, through pregnancy and the delivery.