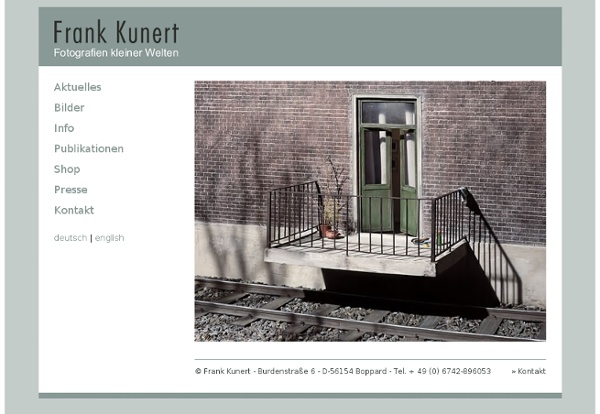 Museum of Arts and Design Collection Database Virtual reality has been a powerful factor in shaping our social and artistic environment since the 1970s. Today, innovations in digital technology have completely transformed film, video, and television: extraordinary special effects and three-dimensional imaging created using computer-based software are commonplace. However, while the digital world continues to expand into more and more areas of our lives, a profound human need to re-experience the actual and tangible has also arisen. It is not a coincidence that as individuals spend more and more time looking at a monitor interacting with others in cyberspace, the pleasures in making things by hand, engaging with materials and techniques in a direct fashion, also increase. Otherworldly: Optical Delusions and Small Realities is organized around four themes that provide a context for the works, and offer the viewer a narrative thread that makes the works accessible to our visitors.

Wes Craven Favorite Horror Movies The Lone Star State has led a surprisingly progressive overhaul of its incarceration system. The story behind the bipartisan push that GOP contenders may be extolling come 2016. It appears Rick Perry is going to run for president again in 2016. Perry, 65, will leave the governor’s office next January after serving for 14 years, beginning in 2000, when George W. As he creeps back onto the national stage, Perry—who has overseen the executions of 268 people—more executions than any other governor in United States history—has brought with him an unlikely Lone Star State success story: prison reform. In Texas, funneling money to special courts (like drug courts or prostitution courts), rehabilitation, and probation in an effort to make sure current offenders don’t reoffend, instead of continuing to make room for more prisoners, has resulted in billions saved and dramatically lower crime rates. The conservative movement to reform prisons is not new. Bush Lt. (The most important question?

Storytelling Sessions | Wildflowers Photography Wildflowers Photography Our Photos full of bliss, in their happy place... recently on the blog Thank you from the bottom of our hearts. thank you. just thank you. you people are amazing. the last month has been quite a beautiful roller coaster for us. a beautiful, epic, once in a lifetime, award winning movie kind of beautiful. we have… Our 2013 Travel Dates! hello there! our services find us Thank you for stopping by, it makes us smile! Copyright Wildflowers Photography. Site Design: One Plus One Programmed by: Black Plastic Monitoring and Controlling the InfiniBand Fabric This chapter describes how to monitor and control the InfiniBand fabric. 14.1 Monitoring the InfiniBand Fabric This section contains the following topics: 14.1.1 Identifying All Switches in the Fabric You can use the ibswitches command to identify the Sun Network QDR InfiniBand Gateway Switches in the InfiniBand fabric in your Exalogic machine. On any command-line interface (CLI), run the following command: # ibswitches The output is displayed, as in the following example: Switch : 0x0021283a8389a0a0 ports 36 "Sun DCS 36 QDR switch localhost" enhancedport 0 lid 15 lmc 0 Note: The actual output for your InfiniBand fabric will differ from that in the example. 14.1.2 Identifying All HCAs in the Fabric You can use the ibhosts command to display identity information about the host channel adapters (HCAs) in the InfiniBand fabric in a subnet. On the command-line interface (CLI), run the following command: # ibhosts 14.1.3 Displaying the InfiniBand Fabric Topology # ibnetdiscover # ibtracert slid dlid

Do Ho Suh, Fallen Star - Stuart Collection - UC San Diego Do Ho Suh’s Fallen Star is the 18th permanent sculpture commissioned by UCSD’s Stuart Collection. It reflects Suh’s on-going exploration of themes around the idea of home, cultural displacement, the perception of our surroundings, and how one constructs a memory of a space. His own feelings of displacement when he arrived in the U.S. from Seoul, Korea in 1991 to study led him to measure spaces in order to establish relationships with his new surroundings. Suh’s small “home” has perhaps been picked up by some mysterious force and appears to have landed or crashed onto the seventh floor of Jacobs Hall at the Jacobs School of Engineering. Do Ho Suh graduated from Seoul National University. Funding has been made possible through private donations and a grant from the National Endowment for the Arts’ program for Access to Artistic Excellence.