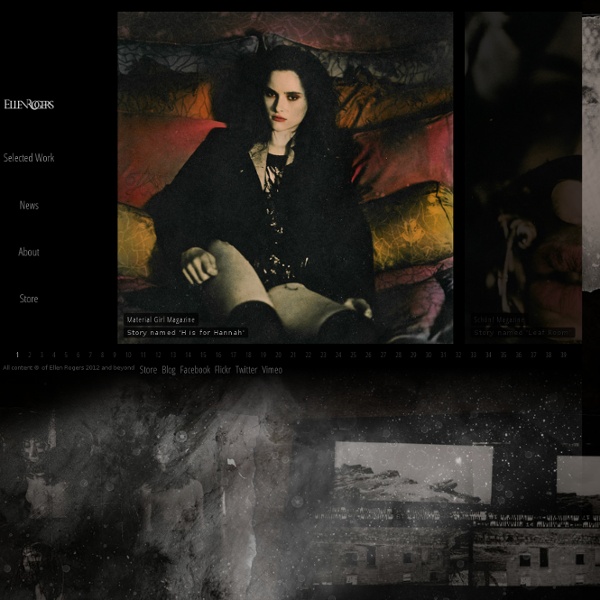 Half-Drag « Leland Bobbé Interview And Images In Gadzuna © Leland Bobbé An interview and images from many of my projects just came out in Gadzuna, an Italian publication that covers design, art, communication and digital culture. The article feature images from Half-Drag, Neo-Burlesque, Women of 5th Ave and street photography March 25th, 2014

Jed Root A Shaded View on Fashion Film (ASVOFF) was launched in 2008 by famous fashion curator, blogger & journalist Diane Pernet. It is the first short film festival in the world dedicated to fashion, style & beauty. ASVOFF is not only a short film festival competition, but it’s also known as an international event that travels the world showing movies, documentaries, conferences, performances & installations. Story Behind Those Stunning Cinematic Gifs Here at theMET, we're always looking for creative projects that catch our eye. More than anything, we love posting about work that pushes boundaries, showing our audience something that has been changed, flipped or spinned into something magically different. Then, we see it as our job to find out the story behind such projects.

Crazy Cool Photography That Pops! (10 total) If Daft Punk and Lady Gaga were to have a love child, we imagine she would look something like this (above). These candy colored creatures are actually the work of artistic duo Ralph Lagoi and Kate Lace, otherwise known as Lagoi & Lace. While studying art and photography at the Academy of Media Arts in Cologne, they decided to combine their various strengths in photography, design, art direction and styling to celebrate the power of beauty and fashion. Set in actual love hotel rooms in Japan, this spread is called "Love Land Invaders." It features superhero-like characters in crazy cool outfits and accessories like masks, glasses, shields, armory, jewelry, and ribbon. Each character represents a certain aspect of beauty (the beauty of dark elegance, the beauty of a gentleman, the beauty of play, the beauty of wilderness, the beauty of pink).

Arthur Siegel, Margaret de Patta, Elsa Kula, David Pratt, Bernard Siegel, George Barford, Frederick Sommer, Raoul Hausmann, Ralph Steiner, Jaromir Funke, Eli Lissitsky, Floris Neussus, Gyorky Kepes, Franz Roh, Kurt Schwitters, Robert Heinecken, Umbo, Otto “The shadows that things make The things that shadows make” by Les Rudnick © 2004-2011 Les Rudnick gabriele galimberti Girl’s Bedrooms: Mirrors and Windows Getting to see girls’ bedrooms must have been a teenage obsession for the members of the all-male photographic collective Riverboom. Now that they have more or less grown up, they have decided to transform that dream into a reality. Riverboom’s Gabriele Galimberti and Edoardo Delille are traveling the five continents to see where girls, between the ages of 18 and 30, sleep. They have discovered that girls’ bedrooms are much more then just places where they lay down their heads – they are the places where girls read, love, dream, work and play.

How to Watermark Your Photos - Learn Tips for Watermarking Your Photos If you're placing your photographs on the Internet, you'll want to make sure you protect your rights to those images. The best way to protect digital photos is by learning how to watermark your photos. With a digital photo, a watermark is a faint logo or word(s) superimposed over the top of the photo. The idea of placing a watermark on your photos is so that others will not want to try to copy and use the photo without permission. Many Web sites use watermarks to show that a particular image is copyrighted, and it may not be copied and used elsewhere without the permission of the original Web site. It's important that you use watermarks properly, and the tips listed below can provide that information.

Retro Atelier F or the sake of bringing structure into the heap of material we executed through the years, we divided the scope of our activities into four stretches of time. The first section, for convenience is called the «Victorian period», embraces our imitation of early photography of the second half of the 19th century. The images of our favorite style Art Nouveau (alias Modern, alias Jugendstil, alias Secession) of the last refined and elegant style in our opinion. The second section is Art Deco , the time of urbanization, revolution, emancipation, electrification, automobilization and many other «...tion». All of which had considerable influence on appearance of various «isms» in art, cubism, constructivism, postimpressionism and so forth.

Melancholie² Ask Archive • RSS Theme JAPAN ♀ I ❤ B&W. Twitter: flavors.me: Inside North Korea - Alan Taylor - In Focus Earlier this year, David Guttenfelder, chief Asia photographer for the Associated Press, along with Jean H. Lee, AP bureau chief in Seoul, were granted unprecedented access to parts of North Korea. The pair made visits to famous sites accompanied by government minders. They were also allowed to travel into the countryside accompanied by North Korean journalists instead of government officials.

MC Escher Water Drop After two hours and about 150 shots, Redditor smsilton managed to take a relatively clear shot of a MC Escher painting through a water drop. His weapon of choice was Canon 60mm macro f/2.8, which he shot at ISO 640 and 1/250. "The hardest part was focusing," he says. "In the set up picture you can see a piece of string above the eye dropper.