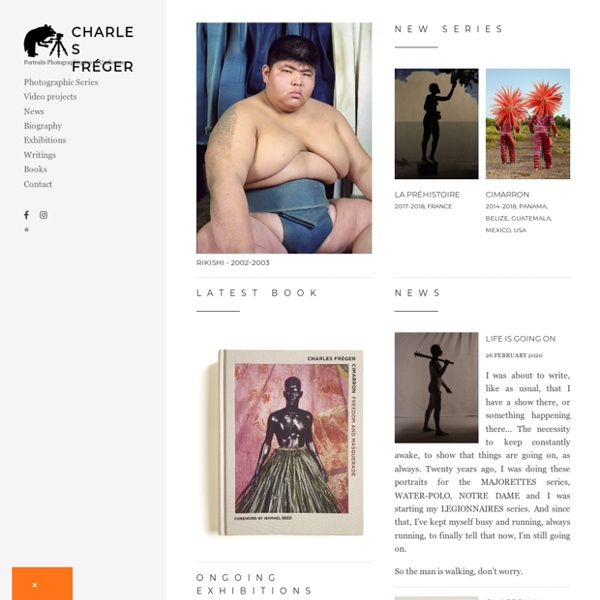 rinkokawauchi_jp News: りんこ日記はこちらです。>>Rinko DiaryInstagram >> rinkokawauchi Liu Silin Liu Silin 刘思麟 (born in 1990) – aka Celine Liu - is a female Chinese photographer who graduated from the Academy of Arts & Design, Tsinghua University. In her series “I’m everywhere” started in 2002, she challenges our global cultural landscape by literally integrating herself in iconic portraits in the history of photography. Moving beyond time and space, Liu is portrayed next to famous figures in history, such as Pablo Picasso, Charlie Chaplin, Mao Zedong, Marilyn Monroe, and Andy Warhol. Her creative process is twofold: she first searches for portraits on the Internet that appeal to both Chinese and Western audiences; she then edits the portrait by pasting herself in and upload it back to the internet.

Mon Tour 2 Roues ... Photojournalism — Brent Stirton KIKA, CAMEROON, JULY 2010: Members of the Baka Pygmy tribe, the original forest dwellers of the Cameroon forests, Kika, Cameroon, June 9, 2010. The Baka have small logging concessions of their own in community forest areas but are plaughed by a lack of education, logging equipment, access to markets and an addiction to alcohol fostered by their Bantu neighbours who ruled them for many years and who often pay the Baka for labor in alcohol. Logging roads and subsequent small towns created by logging concessions are bringing man and infrastructure further into the forest of Cameroon than ever before, Kika, Cameroon, June 5, 2010. This is severely threatening the great forests of the Congo Basin, one of the last great Forest reserves in the world.

Gregg Segal By continuing to visit this site you agree to our use of cookies. Learn more Un-Daily Bread Daily Bread me, mestizo - Jonathas de Andrade Eu, mestiço Me, mestizo. 2017UV print on falconboard 16mm, variable dimensions. The project takes as a starting point the book Race and Class in Rural Brazil, produced by Columbia University in partnership with Unesco and published in 1952. The study makes use of photographs in its research methodology, presenting to the participants photographs of people of various race backgrounds, and inviting them to analize according to six attributes: wealth, beauty, intelligence, religiosity, honesty and aptitude for work. The responses are taken into account by the study, which starts to establish racial typologies, to identify recurrent racist manifestations and their criteria, as well as to search for possible structural genesis for Brazilian racism. The published study does not include the photographs used in the research process, and manifests certain fascination with the myth of Brazil as a bastion of racial democracy. IMS - How did you choose the portraits and how was the studio sessions?

Ecosystem of Excess, 2014 - Pinar Yoldas This project starts in the Great Pacific Garbage Patch. Covering between 700000 and 15 million square kilometers, the site is a monument to plastic waste on a global scale. Referring to Kantian aesthetics, it is a truly ‘sublime’ kinetic sculpture built by all the nations around the Pacific Ocean through many years of mindless, unsustainable consumption. Frances Benjamin Johnston After setting up her own photography studio in 1894, in Washington, D.C., Frances Benjamin Johnston was described by The Washington Times as “the only lady in the business of photography in the city.” Considered to be one of the first female press photographers in the United States, she took pictures of news events and architecture and made portraits of political and social leaders for over five decades. From early on, she was conscious of her role as a pioneer for women in photography, telling a reporter in 1893, “It is another pet theory with me that there are great possibilities in photography as a profitable and pleasant occupation for women, and I feel that my success helps to demonstrate this, and it is for this reason that I am glad to have other women know of my work.”

Chris Jordan - Running the Numbers II This ongoing series looks at mass phenomena that occur on a global scale. Similarly to the first Running the Numbers series, each image portrays a specific quantity of something: the number of tuna fished from the world's oceans every fifteen minutes, for example. But this time the statistics are global in scale, rather than specifically American. Finding meaning in global mass phenomena can be difficult because the phenomena themselves are invisible, spread across the earth in millions of separate places. There is no Mount Everest of waste that we can make a pilgrimage to and behold the sobering aggregate of our discarded stuff, seeing and feeling it viscerally with our senses. Instead, we are stuck with trying to comprehend the gravity of these phenomena through the anaesthetizing and emotionally barren language of statistics.

Nikki S. Lee Nikki Seung-hee Lee (born 1970)[2] is a visual artist born in Kye-Chang, South Korea. Currently working in New York City, Nikki (Seunghee) Lee, works professionally in the field of photography and film. Her work is informed as an 'Asian notions of identity, where identity is not a static set of traits belonging to an individual, but something constantly changing and defined through relationships with other people.' [3] Early life[edit] Heather Dewey-Hagborg With Chelsea E. Manning Probably Chelsea consists of thirty different possible portraits of Chelsea Manning algorithmically-generated by an analysis of her DNA. Genomic data can tell a multitude of different stories about who and what you are.

échapper au fantôme On January 18, 7,000 websites, including Wikipedia’s English site, orchestrated a collaborative blackout to protest the Stop Online Piracy Act and the Protect IP Act from being passed in the US House of Representatives and the US Senate, respectively. As the internet generates new means of expression and economic exchange on a daily basis, our digital era has magnified the fundamental tension at the heart of copyright law—that of free speech and innovation versus exploitation of property. No Ghost Just a Shell (1999–2002), the quixotic art project conceived by French artists Pierre Huyghe and Philippe Parreno at the close of the last century, foreshadowed several aspects of copyright’s contemporary travails. The title refers to Masamune Shirow’s manga classic Ghost in the Shell, (1991).