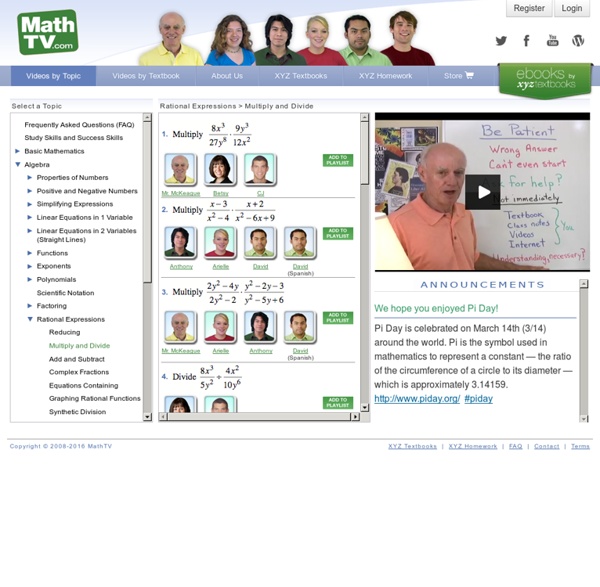 College Algebra Prep:A four-week course to get you ready to take college algebra. Click here for more information. Enrollment is limited. To reserve a place in the course, with no obligation to pay, click here. Tweets There is a shift happening... more wives have higher #education than husbands. http://t.co/l3saRw1xcV #MathTV — MathTV (@mathtv) February 17, 2014

ARKive - Discover the world's most endangered species Wildscreen's Arkive project was launched in 2003 and grew to become the world's biggest encyclopaedia of life on Earth. With the help of over 7,000 of the world’s best wildlife filmmakers and photographers, conservationists and scientists, Arkive.org featured multi-media fact-files for more than 16,000 endangered species. Freely accessible to everyone, over half a million people every month, from over 200 countries, used Arkive to learn and discover the wonders of the natural world.

Times Tables Game – Tables Combination Click to Download the template A times tables card game called Tables Combination where the aim of the game is to use more of your cards than the other player by using them in times tables combinations. The game can be played by primary school and elementary school students to help them practice and memorise their times tables. Tales of Future Past It wasn't that long ago that we had a future. I mean, we have one now; the world isn't going to crash into the Sun or anything like that. What I mean is that we had a future that we could clearly imagine. The future wasn't tomorrow, next week, next year, or next century. A First Course in Linear Algebra (A Free Textbook) Open Content Mathematics Curriculum This is an evolving description of books and software that could be used to design a totally open undergraduate mathematics curriculum. This is meant to be a selective list, so you can consider these to be personal recommendations, not just links I've found promising. As such there will be a limited number of entries in each category. The first criteria in selecting texts is that preference will be given to those that are truly free - as in free to copy, free to modify, free to distribute, free to sell. For example, a text that prohibits commercial use does not have full freedom.

The Game of SKUNK Write the following questions on the chalkboard or overhead: I might make more money if I was in business for myself; should I quit my job? An earthquake might destroy my house; should I buy insurance? My mathematics teacher might collect homework today; should I do it? Must Watch Documentaries About The U.S. Real Scientific Evidence of Controlled Implosion "The preconceived notion of NIST is that there's no evidence for explosives, as in there is no point in looking. That is the most unscientific thing which you can possibly think of. Not to look because you don't expect to find evidence and in fact the evidence is overwhelming. They state these conclusions for which there is no evidence and then they ignore conclusions that can be drawn from the evidence."

Information for Teachers You’re just a click away from even more powerful teaching. You want to help your students to learn more math and science. So do we. That’s why we’ve spent over 15 years using technology to bring science and math ideas alive. The best part about it? Home Page Teachers Primary Pupils Secondary Students Authentic video in the classroom: Ireland II My second example of utilising authentic video in the EFL classroom is based on the same 50-minute travel video as my first. Of course, one can apply this to any video, but this time I will stick with Ireland. How I do it now will, however, differ from my last post because now I’ll concentrate on the language and vocabulary awareness in detail (but I wouldn’t use both methods on the same video in the same class, though). This approach is, however, associated with a lot of painstaking preparatory work for the teacher, because transcription of the video material needs to be done, at least for some of the clips.

Breakthrough in Thin-Film Solar Cells Scientists at Johannes Gutenberg University Mainz (JGU) in Germany have recently reported a breakthrough in their search for more efficient thin-film solar cells. Such cells could help create better solar receptors, improving both capacity and utilization of current devices – resulting in more realistically efficient sources for alternative energy. The new study shows that the new potential efficiency is 30%, a significant increase in comparison to contemporary cells that have only about 20% efficiency. Using computer simulations, the scientists investigated ways to improve the performance of CIGS thin-film solar cells; these are important since they are only a few micrometers thick, and offer savings on material and manufacturing costs.