Alcohol-Free Cannabis Tincture. Story by Subcool Photos by Subcool and MzJill I’d like to show you how to make this amazing cannabis preparation. 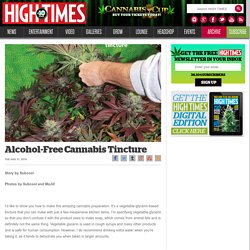 It’s a vegetable-glycerin-based tincture that you can make with just a few inexpensive kitchen items. I’m specifying vegetable glycerin so that you don’t confuse it with the product used to make soap, which comes from animal fats and is definitely not the same thing. Vegetable glycerin is used in cough syrups and many other products and is safe for human consumption. Glycerin – also known as glycerol – is easy to find. I like to take the high-quality shake and bud and grind them up well, then place them in a two-quart glass jar. Once the jar is 90 percent filled with ground weed and kif, slowly add the glycerin until the weed is covered and the jar is full. Choosing Strains for the “Tinc” Now here is where some knowledge of individual cannabis strains can be very helpful. We’ve also seen incredible results with people using the tinc to treat migraines. Waning Moon - Moon Phases. The Waning Moon Waning Moon means the moon is decreasing in size, moving from the Full Moon towards the New Moon. 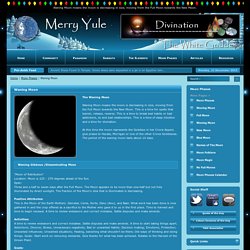 This is a time for spells that banish, release, reverse. This is a time to break bad habits or bad addictions, to end bad relationships. This is a time of deep intuition and a time for divination. At this time the moon represents the Goddess in her Crone Aspect, give praise to Hecate, Morrigan or one of the other Crone Goddesses. Potential Impact of Cinnamon on Multiple Sclerosis Studied - Press Releases - Rush University Medical Center - Rush University Medical Center.

Rush Scientist Receives NIH Grant to Research the Effects of the Common Household Spice on Multiple Sclerosis (CHICAGO) – A neurological scientist at Rush University Medical Center has received a grant from the National Institutes of Health (NIH) to evaluate whether cinnamon, a common food spice and flavoring material, may stop the destructive process of multiple sclerosis (MS). 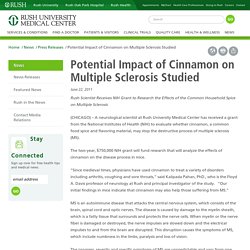 The two-year, $750,000 NIH grant will fund research that will analyze the effects of cinnamon on the disease process in mice. “Since medieval times, physicians have used cinnamon to treat a variety of disorders including arthritis, coughing and sore throats,” said Kalipada Pahan, PhD., who is the Floyd A. Cinnamon Ameliorates Experimental Allergic Encephalomyelitis in Mice via Regulatory T Cells: Implications for Multiple Sclerosis Therapy. Abstract Upregulation and/or maintenance of regulatory T cells (Tregs) during an autoimmune insult may have therapeutic efficacy in autoimmune diseases. 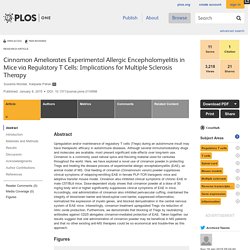 Although several immunomodulatory drugs and molecules are available, most present significant side effects over long-term use. Cinnamon: Health Benefits, Research, Risks. Cinnamon is a spice that comes from the branches of wild trees that belong to the genus "Cinnamomum" - native to the Caribbean, South America, and Southeast Asia. 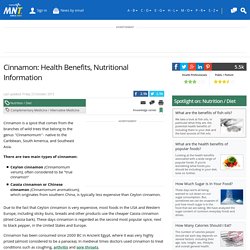 There are two main types of cinnamon: Ceylon cinnamon (Cinnamomum verum), often considered to be "true cinnamon"Cassia cinnamon or Chinese cinnamon (Cinnamomum aromaticum), which originates from southern China, is typically less expensive than Ceylon cinnamon. Due to the fact that Ceylon cinnamon is very expensive, most foods in the USA and Western Europe, including sticky buns, breads and other products use the cheaper Cassia cinnamon (dried Cassia bark). These days cinnamon is regarded as the second most popular spice, next to black pepper, in the United States and Europe. EAE cure of the week. Cinnamon. Mondal S, Pahan K.Cinnamon Ameliorates Experimental Allergic Encephalomyelitis in Mice via Regulatory T Cells: Implications for Multiple Sclerosis Therapy. 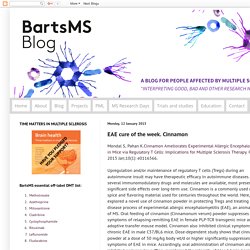 PLoS One. 2015 Jan;10(1): e0116566. Upregulation and/or maintenance of regulatory T cells (Tregs) during an autoimmune insult may have therapeutic efficacy in autoimmune diseases. Although several immunomodulatory drugs and molecules are available, most present significant side effects over long-term use. Does Diet Matter in Multiple Sclerosis? Every morning, “V” starts her day with “bulletproof coffee”: coffee blended with butter and coconut oil. 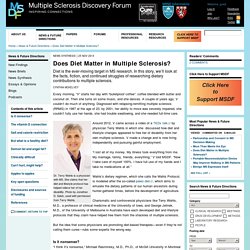 Then she turns on some music, and she dances. A couple of years ago, V couldn’t do much of anything. Diagnosed with relapsing-remitting multiple sclerosis (RRMS) in 1987 at the age of 23, by 2001, her ability to move was severely impaired, she couldn’t fully use her hands, she had trouble swallowing, and she needed full-time care. Dr. Turmeric: Can It Help Manage MS Symptoms? Turmeric, to many of us, is just a spice that we keep at the back of our spice cupboards and add to curries every now and then. 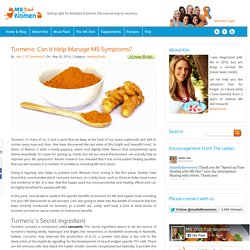 Few have discovered the real value of this bright and beautiful root! In terms of flavour, it adds a lovely peppery, warm and slightly bitter flavour that compliments spicy dishes beautifully. It’s super for spicing up meals, but did you know that turmeric can actually help to improve your MS symptoms? Recent research has revealed that it has some potent healing qualities that can aid recovery in a number of conditions, including MS and cancer.

Eating it regularly also helps to prevent such illnesses from arising in the first place. In this post, I would like to explore the specific benefits of turmeric for MS and explain how, including it in your MS diet it works to aid recovery. Turmeric contains a compound called curcumin. There are so many fabulous health benefits of turmeric. 1. Curcumin has been shown to work in a similar way to an antidepressant. 2. Natural Remedies for MS: 33 Vitamins and Supplements. Multiple sclerosis (MS) is a chronic condition affecting the central nervous system. 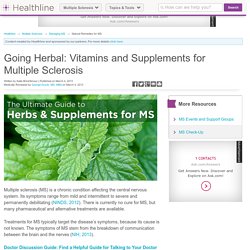 Its symptoms range from mild and intermittent to severe and permanently debilitating (NINDS, 2012). There is currently no cure for MS, but many pharmaceutical and alternative treatments are available. Treatments for MS typically target the disease’s symptoms, because its cause is not known. The symptoms of MS stem from the breakdown of communication between the brain and the nerves (NIH, 2013). Doctor Discussion Guide: Find a Helpful Guide for Talking to Your Doctor About RMS Treatment Options (From our Sponsor) Huge news: multiple sclerosis is a metabolic disorder. In the latest issue of the Quarterly Review of Biology (Vol 86 Number 4, December 2011), in a paper titled “Multiple Sclerosis is Not a Disease of the Immune System,” Dr Angelique Corthals argues that multiple sclerosis (MS) isn’t a disease of the immune system: it is caused by faulty lipid metabolism. 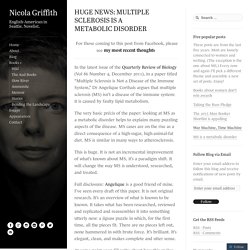 The very basic précis of the paper: looking at MS as a metabolic disorder helps to explains many puzzling aspects of the disease. MS cases are on the rise as a direct consequence of a high-sugar, high-animal-fat diet. MS is similar in many ways to atherosclerosis. MS as metabolic disorder, and diet.