News That Will Drive You To Drink. Happy Hour News One Flew Over Bachmann’s Nest Crazy unkka Pat Robertson still has a few tricks up his cardigan: “…Congresswoman Michele Bachmann is a distinguished leader of national and global reputation,” said Robertson. 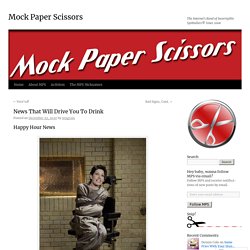 “She has displayed exemplary vision, character, integrity, and skill throughout her career in government. We are delighted to welcome to Regent this remarkable public servant whose vast experience and principled leadership will provide an extraordinary role model for our students and graduates to emulate.” Sharing Means Caring, fool! News That Will Drive You To Drink. Happy Hour News Briefs One Flew Over Bachmann’s Nest She’s baaa-ack! 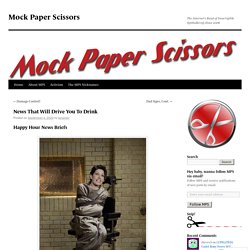 One-L, never, ever change. Sharing Means Caring, fool! News That Will Drive You To Drink. Happy Hour News Briefs Our old pal One-L is back to her ol’ dishonest tricks! 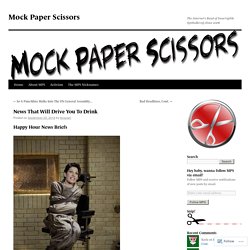 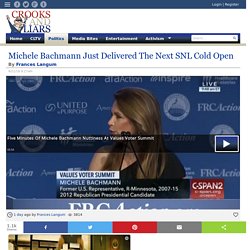 Anyone who has studied fundamentalist nationalism aka dominionism knows Michele Bachmann is hitting all the high notes in her Values Voter Summit Speech Friday. But beyond the truly dangerous rhetoric, she's also hilarious. Here's a Twitter annotated transcript of just a few minutes of her "Golden Time" speech. Please note if you don't watch the video, John Bolton gets bigger applause than Trump. These people are organized, driven, well-funded, and know exactly what they want: an America that's White, Evangelical Christian, and lords it over the world with military might.

MICHELE BACHMANN: Probably one of the greatest threats that we are dealing with today is the loss of religious liberty and the loss of free speech. Not by choice, but because the masters of the universe, the tech titans of the Facebook, the Instagrams, the Twitters, the social media, YouTubes, have decided our voice is not a legitimate voice. Michele Bachmann asked God for a sign about running for U.S. Senate and the Lord delivered. Michele Bachmann: I’m advising Trump on Islamic terrorism — like we face here in Minnesota. Hot on the heels of another major Trump campaign shakeup, former GOP Rep. 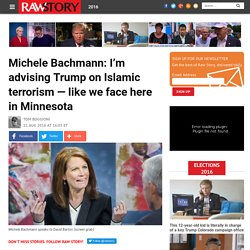 Michele Bachmann revealed that she has been giving advice to nominee Donald Trump on foreign affairs including the looming threat of Islamic terrorism in the world — and not just in her home state of Minnesota. Trump made a campaign stop in Minnesota Friday night for a private event for campaign contributors only in a state where Nate Silver’s 538 gives him a 13 percent chance of winning — less than his national odds of 15 percent. According to MPR, the former congresswoman stopped in for a meeting with Trump before the event where she admitted that she is counseling him on world affairs as well as advocating for the concerns of Christian conservatives.

According to Bachmann, who stepped down in 2014 when faced with a losing campaign and questions about campaign finances, Trump understands the threat of Islamic terrorism. Michele Bachmann Still Has Some Crazy Theories About Obama. At the Café, we always keep a stool at the counter open for Michele Bachmann, who became one of our first regulars right after we opened up. 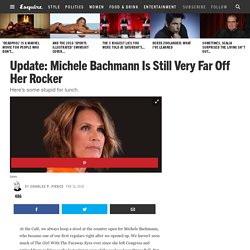 We haven't seen much of The Girl With The Faraway Eyes ever since she left Congress and retired from politics as the last winner ever of the useless Iowa Straw Poll. But we keep her little piece of linoleum behind a velvet rope for days like this one recently, when she came back for a heapin' helpin' of her old usual. Bachmann, who has previously claimed that President Obama and the gay rights movement are ushering in the Last Days, told radio hosts Jan Markell and Eric Barger that "the world is about to give legitimacy to the Islamic State" while, at the same time, Russian and Iranian military intervention in Syria on behalf of its dictator Bashar Assad has paved the way for a future invasion of Israel by the two countries in order to seize its energy resources, just as laid out in the Bible.

Advertisement - Continue Reading Below. Michele Bachmann warns Obama will take over the United Nations — and then reveal he’s the Antichrist. Michele Bachmann is fantasizing about the apocalypse again — but it’s hard to tell if she’s trying to stop it or enthusiastically cheering it on. 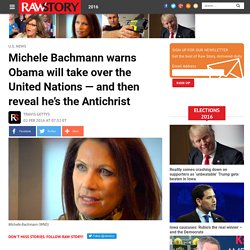 The former Republican congresswoman appeared Saturday on the “end times” radio program hosted by Jan Markell and Eric Barger, who she warned that the Syrian civil war was setting up the biblical battle of Armageddon, reported Right Wing Watch. Bachmann predicted world leaders were poised to grant “legitimacy to the Islamic State,” and she said Russian and Iranian military intervention in Syria was establishing grounds for a future invasion of Israel to seize its energy resources — in accordance with the biblical prophecy. “I believe that they are positioning themselves so that someday they could invade Israel to be able to take over the vast stores of oil and natural gas that Israel is controlling,” she said. She said a partnership between Russia and Iran, supported by China, would match the scriptural account laid out in the Book of Revelation. 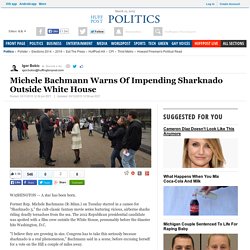 Former Rep. Michele Bachmann (R-Minn.) on Tuesday starred in a cameo for "Sharknado 3," the cult-classic fantasy movie series featuring vicious, airborne sharks riding deadly tornadoes from the sea. The 2012 Republican presidential candidate was spotted with a film crew outside the White House, presumably before the disaster hits Washington, D.C. "I believe they are growing in size. Congress has to take this seriously because sharknado is a real phenomenon," Bachmann said in a scene, before excusing herself for a vote on the Hill a couple of miles away. Michele Bachmann: Obama is supporting ‘Islamic jihad’ and laughed at me at a holiday party. Rep. 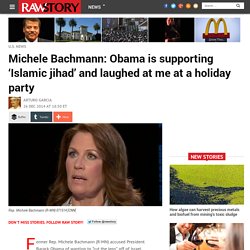 Michele Bachmann (R-MN) 071514 [CNN] Former Rep. Michele Bachmann (R-MN) accused President Barack Obama of wanting to “cut the legs” off of Israel, and of dismissing her concerns over reported negotiations with Iran, Buzzfeed reported. “I asked him to please end their nuclear program, because we have the capacity to end it,” Bachmann said in an interview with Family Research Council leader Tony Perkins. “And I said, ‘Mr. Bachmann, a former member of the House Intelligence Committee, said the encounter took place during a White House holiday party.

Michele Bachmann Blames Immigrants For Fake War, Wants Their Money. A conservative congresswoman says the United States should confiscate all the money undocumented immigrants send home because the U.S. is at war with them. 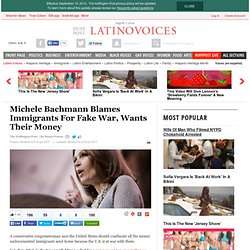 U.S. Rep. Michele Bachmann retiring under fire - Alex Isenstadt and Jake Sherman. Rep. Michele Bachmann (R-Minn.) — the tea-party firebrand facing investigations and a daunting reelection race — abruptly announced on Wednesday morning that she will not seek reelection to a fifth term. Her move marked a spectacular fall for a congresswoman with a bull’s eye on her back every congressional cycle: Less than two years ago, she won the Iowa straw poll and was briefly regarded as a serious contender for the GOP presidential nomination. Continue Reading Following Palin playbook? Bachmann, 57, who took office in 2007, said in a video posted on her website: “My good friends: After a great deal of thought and deliberation, I have decided next year I will not seek a fifth congressional term to represent the wonderful people of the Sixth District of Minnesota. Michele Bachmann: Gays want to ‘freely prey on little children sexually’

By David FergusonFriday, July 25, 2014 18:12 EDT In a Wednesday appearance on the Christian radio show Faith and Liberty, Rep. Michele Bachmann (R-MN) said that LGBT people are attempting to make it legal to rape children in the U.S. and impose their agenda of “deviancy” on the whole population. According to Right Wing Watch, Bachmann said that the “gay community” is taking steps to “abolish age of consent laws, which means we will do away with statutory rape laws so that adults will be able to freely prey on little children sexually.

That’s the deviance that we’re seeing embraced in our culture today.” When It Comes To Folding Napkins, Don't Mess With Michele Bachmann. Michele Bachmann ties women’s museum to ‘eugenics’ and the ‘elimination’ of blacks. By David EdwardsWednesday, May 7, 2014 16:04 EDT Rep. Michele Bachmann (R-MN) on Wednesday opposed the National Women’s History Museum by connecting it to “eugenics” and same-sex marriage. During a House debate on whether or not Congress should appoint a commission to study how to move forward with building the National Women’s History Museum, Bachmann stood up and urged her colleagues to vote against the measure. “I rise today in opposition to this bill because I believe ultimately this museum — that will be built on the National Mall on federal land — will enshrine the radical feminist movement that stands against the pro-life movement, the pro-family movement and the pro-traditional marriage movement,” she announced.

"There's nothing about gays in there. But the gay community decided to make this their measure," Bachmann said. Bachmann: President Obama 'Has Rewritten the Constitution for Himself. Michele Bachmann: Obama 'Funding' Terrorists Is Proof That We're Living In The End Times. Wolf Blitzer Aggressively Argues With Michele Bachmann About Obamacare. Oliver: Mr. President, When Michele Bachmann is on Your Side, You May Want to Look at the Side You're On. Michele Bachmann: Congress Needs To Give Obama A 'Spanking,' Take Away His 'Magic Wand' Michele Bachmann: ‘God Wants Me To Earn 7 Figures For A Lobbying Firm’ WASHINGTON—Saying that it’s the Lord’s will, Minnesota Rep. Michele Bachmann announced on her website Wednesday that she has decided not to seek reelection in 2014 because God wants her to earn millions of dollars working for a high-powered lobbying firm.

According to Bachmann, God spoke to her directly after many days of intense prayer and ultimately told the exiting Congresswoman that there is no reason she should only make $174,000 per year when she could easily earn up to eight times that amount in the private sector. “This was a difficult decision for me, but God said this is a highly lucrative opportunity and I need to capitalize on my fame now before my high media profile diminishes,” said Bachmann, adding that the Supreme Being commanded her to “strike while the iron’s hot” and work for a conservative lobbying group like FreedomWorks or the John Birch Society or whichever one offers her the most money.

Appearing on Fox News' "On The Record" with Greta Van Susteren, Bachmann was critical of the Obama administration for filing charges too quickly "against terrorist number two," the term she calls Tsarnaev. She classified him as an "Islamic jihadist," deeming the alleged actions as a decision to "declare war. " "Now we have essentially duct tape over the mouth of this terrorist and we can't use him to link together this treasure trove of information," said Bachmann, who is a lawyer. "The people hurt the most are the people watching your show and innocent Americans all across the United States.

Michele Bachmann Tries To Run Away From CNN's Dana Bash. "Michele Bachmann": a BLR Soundbite. Michele Bachmann Laughed At For Claiming She Does Not Do 'Political Speech' Michele Bachmann-fact-checking: AP editor said he had to limit coverage during debates. Larry King Laughs in Batshit Bachmann's Face Over Remarks About Beck, Limbaugh, and Hannity. Bachmann: Obama U.S.'s Most 'Dangerous President'

Our Guide to the Best Coverage on Rep. Michele Bachmann and Her Record. A rundown of the stories you need to read about Rep. Michele Bachmann. She has held the title of Tea Party favorite thus far in the campaign, but what about her actual record? Republican presidential candidate Rep. Michele Bachmann, R-Minn., addresses the Blackhawk County Republican Annual Lincoln Day Dinner on Aug. 14, 2011 in Waterloo, Iowa. (Chip Somodevilla/Getty Images) A detailed profile [6] in The New Yorker tracks both her career steps and her deeply religious background. Many of her major career and life decisions have been made, she says, according to visions, prayer and directions by God. Her record: Bachmann spent six years in the Minnesota Senate and is serving her third term in the U.S.

Michele Bachmann: 'We Are Looking At A Spiritual Hurricane'