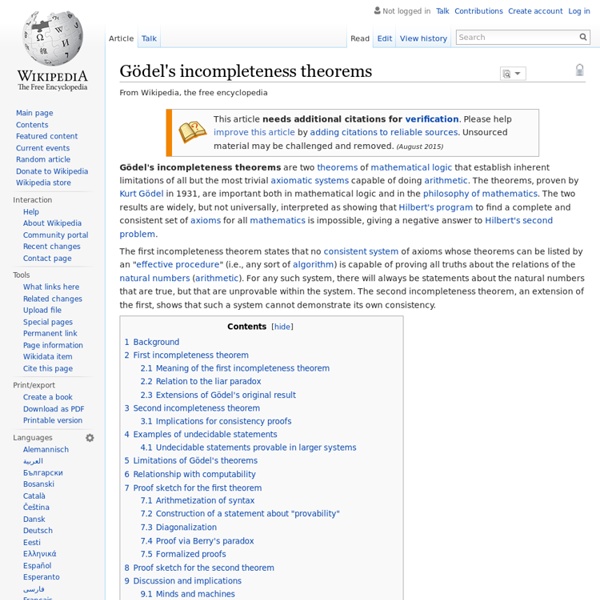 Gödel's incompleteness theorems are two theorems of mathematical logic that establish inherent limitations of all but the most trivial axiomatic systems capable of doing arithmetic. The theorems, proven by Kurt Gödel in 1931, are important both in mathematical logic and in the philosophy of mathematics. The two results are widely, but not universally, interpreted as showing that Hilbert's program to find a complete and consistent set of axioms for all mathematics is impossible, giving a negative answer to Hilbert's second problem. The first incompleteness theorem states that no consistent system of axioms whose theorems can be listed by an "effective procedure" (i.e., any sort of algorithm) is capable of proving all truths about the relations of the natural numbers (arithmetic). Background[edit] Many theories of interest include an infinite set of axioms, however. A formal theory is said to be effectively generated if its set of axioms is a recursively enumerable set. p ↔ F(G(p)). B.

Fuzzy logic Fuzzy logic is a form of many-valued logic; it deals with reasoning that is approximate rather than fixed and exact. Compared to traditional binary sets (where variables may take on true or false values) fuzzy logic variables may have a truth value that ranges in degree between 0 and 1. Fuzzy logic has been extended to handle the concept of partial truth, where the truth value may range between completely true and completely false.[1] Furthermore, when linguistic variables are used, these degrees may be managed by specific functions. Irrationality can be described in terms of what is known as the fuzzjective.[citation needed] The term "fuzzy logic" was introduced with the 1965 proposal of fuzzy set theory by Lotfi A. Overview[edit] Classical logic only permits propositions having a value of truth or falsity. Both degrees of truth and probabilities range between 0 and 1 and hence may seem similar at first. Applying truth values[edit] Fuzzy logic temperature Linguistic variables[edit]

Entropy (information theory) 2 bits of entropy. A single toss of a fair coin has an entropy of one bit. A series of two fair coin tosses has an entropy of two bits. This definition of "entropy" was introduced by Claude E. Entropy is a measure of unpredictability of information content. Now consider the example of a coin toss. English text has fairly low entropy. If a compression scheme is lossless—that is, you can always recover the entire original message by decompressing—then a compressed message has the same quantity of information as the original, but communicated in fewer characters. Shannon's theorem also implies that no lossless compression scheme can compress all messages. Named after Boltzmann's H-theorem, Shannon defined the entropy H (Greek letter Eta) of a discrete random variable X with possible values {x1, ..., xn} and probability mass function P(X) as: Here E is the expected value operator, and I is the information content of X.[8][9] I(X) is itself a random variable. . The average uncertainty , with

Principia Mathematica ✸54.43: "From this proposition it will follow, when arithmetical addition has been defined, that 1 + 1 = 2." —Volume I, 1st edition, page 379 (page 362 in 2nd edition; page 360 in abridged version). (The proof is actually completed in Volume II, 1st edition, page 86, accompanied by the comment, "The above proposition is occasionally useful." Τhey go on to say "It is used at least three times, in ✸113.66 and ✸120.123.472.") The title page of the shortened Principia Mathematica to ✸56 I can remember Bertrand Russell telling me of a horrible dream. Hardy, G. He [Russell] said once, after some contact with the Chinese language, that he was horrified to find that the language of Principia Mathematica was an Indo-European one Littlewood, J. The Principia Mathematica (often abbreviated PM) is a three-volume work on the foundations of mathematics written by Alfred North Whitehead and Bertrand Russell and published in 1910, 1912, and 1913. PM has long been known for its typographical complexity.

Three-valued logic In logic, a three-valued logic (also trivalent, ternary, trinary logic, or trilean,[citation needed] sometimes abbreviated 3VL) is any of several many-valued logic systems in which there are three truth values indicating true, false and some indeterminate third value. This is contrasted with the more commonly known bivalent logics (such as classical sentential or Boolean logic) which provide only for true and false. Conceptual form and basic ideas were initially created by Jan Łukasiewicz and C. I. Lewis. Representation of values[edit] As with bivalent logic, truth values in ternary logic may be represented numerically using various representations of the ternary numeral system. Inside a ternary computer, ternary values are represented by ternary signals. This article mainly illustrates a system of ternary propositional logic using the truth values {false, unknown, and true}, and extends conventional Boolean connectives to a trivalent context. Logics[edit] Kleene logic[edit] See also[edit]

Ada Lovelace Augusta Ada King, Countess of Lovelace (10 December 1815 – 27 November 1852), born Augusta Ada Byron and now commonly known as Ada Lovelace, was an English mathematician and writer chiefly known for her work on Charles Babbage's early mechanical general-purpose computer, the Analytical Engine. Her notes on the engine include what is recognised as the first algorithm intended to be carried out by a machine. Because of this, she is often described as the world's first computer programmer.[1][2][3] Ada described her approach as "poetical science" and herself as an "Analyst (& Metaphysician)". As a young adult, her mathematical talents led her to an ongoing working relationship and friendship with fellow British mathematician Charles Babbage, and in particular Babbage's work on the Analytical Engine. Biography[edit] Childhood[edit] Ada, aged four On 16 January 1816, Annabella, at George's behest, left for her parents' home at Kirkby Mallory taking one-month-old Ada with her. Adult years[edit]

The Notation in Principia Mathematica 1. Why Learn the Symbolism in Principia Mathematica? Principia Mathematica [PM] was written jointly by Alfred North Whitehead and Bertrand Russell over several years, and published in three volumes, which appeared between 1910 and 1913. This entry is intended to assist the student of PM in reading the symbolic portion of the work. 2. Below the reader will find, in the order in which they are introduced in PM, the following symbols, which are briefly described. 3. An immediate obstacle to reading PM is the unfamiliar use of dots for punctuation, instead of the more common parentheses and brackets. The use of dots. 3.1 Some Basic Examples Consider the following series of extended examples, in which we examine propositions in PM and then discuss how to translate them step by step into modern notation. Example 1 ⊢:p∨p.⊃.pPp This is the second assertion of “star” 1. ⊢[p∨p.⊃.p] So the brackets “[” and “]” represent the colon in ∗1·2. ⊢(p∨p)⊃p Example 2 p.q.=. (p&q)=df[∼(∼p∨∼q)] p&q=df∼(∼p∨∼q) ⊢:∼p.∨.

Principle of explosion The principle of explosion, (Latin: ex falso quodlibet, "from a falsehood, anything follows", or ex contradictione sequitur quodlibet, "from a contradiction, anything follows") or the principle of Pseudo-Scotus, is the law of classical logic, intuitionistic logic and similar logical systems, according to which any statement can be proven from a contradiction.[1] That is, once a contradiction has been asserted, any proposition (or its negation) can be inferred from it. As a demonstration of the principle, consider two contradictory statements - “All lemons are yellow” and "Not all lemons are yellow", and suppose (for the sake of argument) that both are simultaneously true. If that is the case, anything can be proven, e.g. "Santa Claus exists", by using the following argument: Symbolic representation[edit] The principle of explosion can be expressed in the following way (where " " symbolizes the relation of logical consequence): or This can be read as, "If one claims something is both true ( .

On the Space-Theory of Matter From Wikisource Riemann has shewn that as there are different kinds of lines and surfaces, so there are different kinds of space of three dimensions; and that we can only find out by experience to which of these kinds the space in which we live belongs. In particular, the axioms of plane geometry are true within the limits of experiment on the surface of a sheet of paper, and yet we know that the sheet is really covered with a number of small ridges and furrows, upon which (the total curvature not being zero) these axioms are not true. Similarly, he says, although the axioms of solid geometry are true within the limits of experiment for finite portions of our space, yet we have no reason to conclude that they are true for very small portions; and if any help can be got thereby for the explanation of physical phenomena, we may have reason to conclude that they are not true for very small portions of space.

Ignoratio elenchi Ignoratio elenchi, also known as irrelevant conclusion,[1] is the informal fallacy of presenting an argument that may or may not be logically valid, but fails nonetheless to address the issue in question. Ignoratio elenchi falls into the broad class of relevance fallacies.[2] It is one of the fallacies identified by Aristotle in his Organon. In a broader sense he asserted that all fallacies are a form of ignoratio elenchi.[3][4] Ignoratio Elenchi, according to Aristotle, is a fallacy which arises from “ignorance of the nature of refutation.” The phrase ignoratio elenchi is Latin meaning "an ignoring of a refutation". An example might be a situation where A and B are debating whether the law permits A to do something. See also[edit] References[edit] External links[edit]