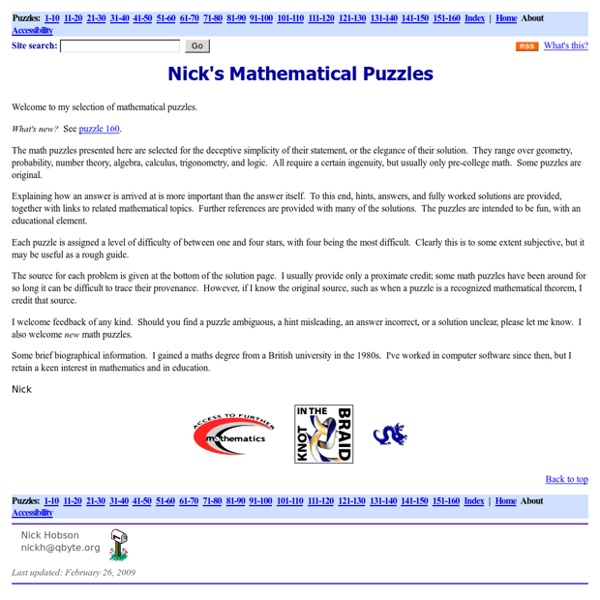 Welcome to my selection of mathematical puzzles. What's new? See puzzle 160. The math puzzles presented here are selected for the deceptive simplicity of their statement, or the elegance of their solution. Explaining how an answer is arrived at is more important than the answer itself. Each puzzle is assigned a level of difficulty of between one and four stars, with four being the most difficult. The source for each problem is given at the bottom of the solution page. I welcome feedback of any kind. Some brief biographical information. Nick Back to top

Math puzzles These puzzles do not require any mathematical knowledge, just logical reasoning. Check, how smart you are. If you cannot solve them, take it easy. Almost all puzzles were told to us by a computer/math genius Vlad Mitlin . Visit us again: we intend to place here new puzzles and the solutions. Please email us your comments and new puzzles: cherk@math.utah.edu. Andrej and Elena 1. Click here 2. A group of four people has to cross a bridge. Solution: Click here To see the animated solution, you need a browser which supports JAVA 3. The distance between the towns A and B is 1000 miles. Generalize the strategy for an arbitrary amount of apples. More problems from Vlad Mitlin Party! There is a group of people at a party. Digits Show that for any natural n, at least one of two numbers, n or n+1, can be represented in the following form: k + S(k) for a certain k, where S(k) is the sum of all digits in k. Zen problem A Buddhist monk got an errand from his teacher: to meditate for exactly 45 minutes. King

Search Looking Back and Moving Forward Pre-K-2, 3-5, 9-12 This final lesson of the unit reviews the work of the previous lessons through a variety of activity stations, one of which involves using an interactive graphing tool. Students model with buttons and record addition and subtraction. Counting Embedded Figures Students look for patterns within given data and form generalizations for the problem, thereby sharpening the algebraic skills of the students. Building Connections This lesson focuses on having students make connections among different classes of polynomial functions by exploring the graphs of the functions. Counting Embedded Figures This grades 7-12 activity allows students to look for patterns within the given data. Explorations with Chance In this lesson, students analyze the fairness of certain games by examining the probabilities of the outcomes. Exploring Linear Data Students model linear data in a variety of settings that range from car repair costs to sports to medicine.

Mathematical Puzzles Interactive Mathematics Miscellany and Puzzles Excellent. Ken Duisenberg's Puzzle of the Week A good archive to dip into. MathPuzzle.com The webmaster, Ed Pegg Jr, is a twenty year member of the National Puzzler's League, and frequently contributes to the New York Times crossword, Games, and National Public Radio's Sunday Puzzler. The MathSoft Math Puzzle Page Mathematical puzzles featured here have been previously published in Allan Gottlieb's column in the Tech Review. Nick's Mathematical Puzzles The puzzles presented here are selected for the deceptive simplicity of their statement, or the elegance of their solution. The Null Set - Mathematical Puzzles A good selection of puzzles, by Guy Kindler at Tel Aviv University, graded from simple to tough - but most requiring some undergraduate maths knowledge. Number and Word Puzzles 44 monthly puzzles provide entertainment and education for all ages on this Australian website. The Puzzlet Page Enjoy mental workouts? The Puzzling World of Barry R.