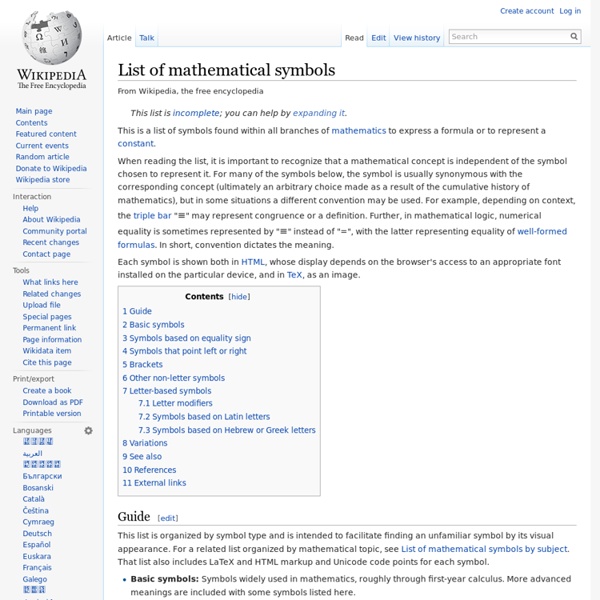 When reading the list, it is important to recognize that a mathematical concept is independent of the symbol chosen to represent it. For many of the symbols below, the symbol is usually synonymous with the corresponding concept (ultimately an arbitrary choice made as a result of the cumulative history of mathematics), but in some situations a different convention may be used. For example, depending on context, the triple bar "≡" may represent congruence or a definition. Further, in mathematical logic, numerical equality is sometimes represented by "≡" instead of "=", with the latter representing equality of well-formed formulas. In short, convention dictates the meaning. Each symbol is shown both in HTML, whose display depends on the browser's access to an appropriate font installed on the particular device, and in TeX, as an image. Guide[edit] This list is organized by symbol type and is intended to facilitate finding an unfamiliar symbol by its visual appearance. Basic symbols[edit]

Approximation An approximation is anything that is similar but not exactly equal to something else. The term can be applied to various properties (e.g. value, quantity, image, description) that are nearly but not exactly correct; similar, but not exactly the same e.g. The approximate time was 10 o'clock. List of Latin abbreviations Nearly all the abbreviations below have been adopted by Modern English. However, with some exceptions (for examples, versus, modus operandi), most of the Latin referent words and phrases are still foreign and unknown to English. In a few cases, English referents have replaced the original Latin ones (e.g., "rest in peace" for R.I.P. and "post script" for P.S.) Latin was once the universal academic language in Europe. From the 18th century authors started using their mother tongues to write books, papers or proceedings.

s Gravity Probe B confirms two Einstein theories Artist concept of Gravity Probe B orbiting the Earth to measure space-time, a four-dimensional description of the universe including height, width, length, and time. Stanford and NASA researchers have confirmed two predictions of Albert Einstein's general theory of relativity, concluding one of the space agency's longest-running projects. Known as Gravity Probe B, the experiment used four ultra-precise gyroscopes housed in a satellite to measure two aspects of Einstein's theory about gravity. The first is the geodetic effect, or the warping of space and time around a gravitational body.

How investigating mediators and moderators helps explain intervention effects How mediators and moderators help explain intervention effects 3Moderators are variables that are present among the population prior to an intervention. Since they arepresent prior to randomization in the case of a trial, moderators should be equally distributed across allgroups. As a result they should not be statistically correlated with treatment status. Neural Outlet.. This post is continuing on from my discussion on large numbers and notation. I am going to assume some knowledge of Set Theory for this post as there really is a lot to write about and I have found it hard to cut it down to a nice size. 2. Infinities Infinity as a concept has scared mathemeticians for a long time, not only was it hard to get your head around, it wasn’t really usable. A recent use is in calculus as, what I would call, a nominal infinity (‘increases without bound’ as opposed to a value or position): Leibniz was facinated by infinity and it’s counterpart infintesimal

Logical symbols I finally got to the math-y part of my logic elective. On the first day we symbolized simple English language statements, and learned about “not,” “or,” “and,” “if… then… ,” and logical equivalence. But there are so many symbols floating around for those five items! I could have stuck with those in my text book (Hurley). Or I could have used the “standard” New York State symbols (ideosyncratic and non-standard, I believe). Your Brain in Love Men and women can now thank a dozen brain regions for their romantic fervor. Researchers have revealed the fonts of desire by comparing functional MRI studies of people who indicated they were experiencing passionate love, maternal love or unconditional love. Together, the regions release neuro­transmitters and other chemicals in the brain and blood that prompt greater euphoric sensations such as attraction and pleasure. Conversely, psychiatrists might someday help individuals who become dan­gerously depressed after a heartbreak by adjusting those chemicals. Passion also heightens several cognitive functions, as the brain regions and chemicals surge. “It’s all about how that network interacts,” says Stephanie Ortigue, an assistant professor of psychology at Syracuse University, who led the study.